What's Trending
Home > News & Politics > Why Jats are on a warpath in Haryana? 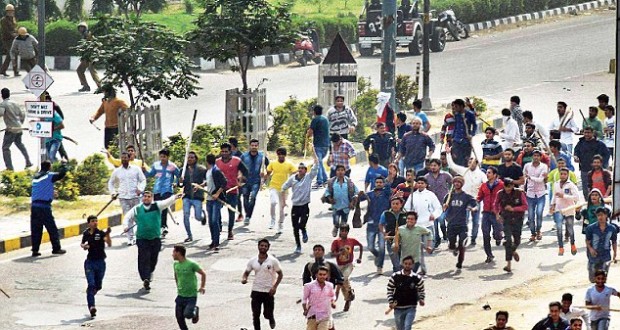 Eight districts of Haryana have been severely affected by the agitation for reservation.

Why Jats are on a warpath in Haryana?

New Delhi: Former Haryana Chief Bhupinder Singh Hooda, who is sitting on a peace fast at Jantar Mantar in New Delhi, wants Manohar Lal Khattar-led BJP government to immediately find a solution to the ongoing Jat agitation for reservation. Ask him what that solution can be and he simply clams up.

Hooda very well knows that whatever Khattar government does may not stand legal scrutiny for long.

Even inclusion of Jats in the OBC list (a decision was announced to this effect by Haryana government ministers on January 21) will be challenged in the courts.

What the two-time Congress Chief Minister does not know is how to dismount the tiger he climbed during his second term (2009-14) in office to be a better Jat leader in the state than Indian National Lok Dal (INLD) leader Omprakash Chautala.

Hooda first introduced 10 percent reservation for Jats and four other castes (Jat Sikh, Bishnoi, Ror and Tyagi) in government jobs in 2013 accepting a recommendation of Haryana Backward Classes Commission in the state. Then in July 2014, over three months before assembly elections, his government decided to provide reservation in promotions in government jobs substantially reducing chances of recruitment and promotion of general category candidates.

Hooda took the steps to be one-up on Chautala in the 26 percent Jat voters of the state. The latter ran neck-in-neck with Hooda in 2009 but for pocket borough of Rohtak and Jhajjar where the Congress made a clean sweep. The INLD swept Jind, a district dominated by Jat community, winning all five assembly constituencies there. The 2009 results (INLD bagged 31 seats vis-à-vis Congress’ tally of 40) made it more than clear that Hooda had to fight with Chautala for every single Jat vote.

Hooda did not want a repeat of 2009 in 2014 and thus, unleashed the Jat reservation in the last half of his second term. But since the 10 percent special backward classes (SBC) quota took reservation percentage much beyond 50 percent a ceiling set by Supreme Court of India, Punjab & Haryana High Court stayed the decision in July 2015.

Since then Khattar government has kept assuring the Jat community that their demand for reservation will be accepted.

It has even proposed to include the caste in EBP (Economically Backward Persons) category and grant 20 percent reservation.

Jats, who along with Jat Sikhs dominate one third of the state’s 90 assembly constituencies, know it too well that the EBP quota will also be struck down by the court sooner rather than later and therefore, are demanding their inclusion in Other Backward Classes (OBCs – 27 percent).

What could complicate the matter further for Khattar government is that the OBCs may not be prepared to share quota with the Jats who are much better placed then them in the social hierarchy.

This is why BJP MP from Kurukshetra Raj Kumar Saini, who himself belongs to the OBC category, has been opposing quota for the Jats. The saffron party issued a show cause notice to Saini on February 20 after the Lok Sabha member kept making statements against reservation for the pheasant community.

If it incorporates Jats in the OBC category, the BJP government runs the risk of antagonising the other backward castes and non-Jats who constitute its main vote bank.

At the same time, it is a fact that the violent Jat stir has widened the existing chasm between Jats and non-Jats in the state. There are statements from agitating groups that either OBC reservation should be extended to Jats or all quotas for government jobs be set aside and that Khattar is against reservation for the community because he belonged to a different caste.

In fact, non-Jat support of the BJP government, is what has made the Jats in Haryana a further aggrieved lot. The martial community feels it has lost political power in the state after 18 years (from 1996 to 2014, the state only had Jat Chief Ministers) and find it difficult to be on the side lines.

The central BJP, however, would want to keep the Jat community in Haryana in good humour as western Uttar Pradesh, where state polls are slated early next year, has large chunk of Jat voters.

Ironically, Omprakash Chautala, who has now backed the quota agitators, was never a vociferous supporter of Jat reservations till 2012. And why Chautala alone, even Charan Singh, former Prime Minister and arguably the tallest leader of agrarian community in northern India, always believed that the proud and hard-working community required no affirmative action for its advancement.

Narendra Modi regime would be in a cleft stick in taking a decision on the issue. The grant of reservation to Jats in Haryana, could fuel similar demands for quota from Patels in Gujarat, Gurjars in Rajasthan, Kapus in Telangana and Jats in states other than Haryana.

This could lead to a repeat of what Manmohan Singh government did in March 2014. Singh government notified inclusion of Jats from nine states in central OBC list, a decision struck down by the Supreme Court a year later on the grounds that the national commission for backward classes reported in the past that the caste was better off and did not merit inclusion in the OBC list.

More than reservation, Jats need improvement in education and their share in class I and class II services (five percent less than their number) in Haryana government. The enrolment of Jat students at graduation and post-graduation levels, is reportedly 6.5 percent and 1.71 percent less than state average of 8.3 percent and 2.26 percent respectively.

Educational backwardness is the reason why Jat boys are content to get into police, paramilitary and other class III and class IV jobs in Haryana and neighbouring Delhi.

The Jat agitation for reservation in educational institutions and government jobs in Haryana, is also a reminder how political parties have turned quotas into a tool for harvesting votes rather than building an egalitarian society in the last few decades.

Unless Khattar and Modi governments decide to deal with the issue in a non-partisan and strict way keeping long term interest of the country in mind, this may not be the last quota stir.