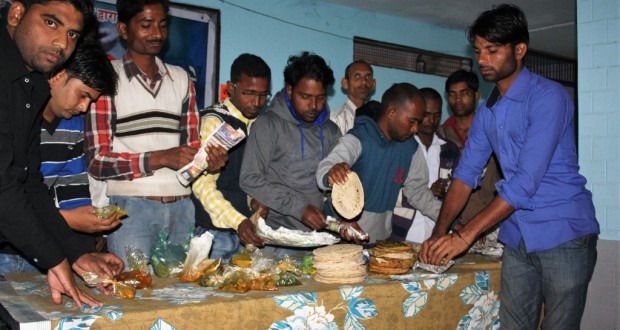 Roti Bank : A lifeline for the poor in Bundelkhand

Mahoba:  Every evening as the clock strikes 7 O’clock, Tara Patkar, a journalist who quit the profession in January 2014 to take up public causes, Haji Muttan, a do-gooder who has performed Haj over a dozen and a half times, and their colleagues pick up jute bags and spread out into different directions of the city.

They beg from door to door, collecting folds of hot crisp rotis, and pouches of freshly cooked vegetables fastened with rubber bands from houses in different colonies. 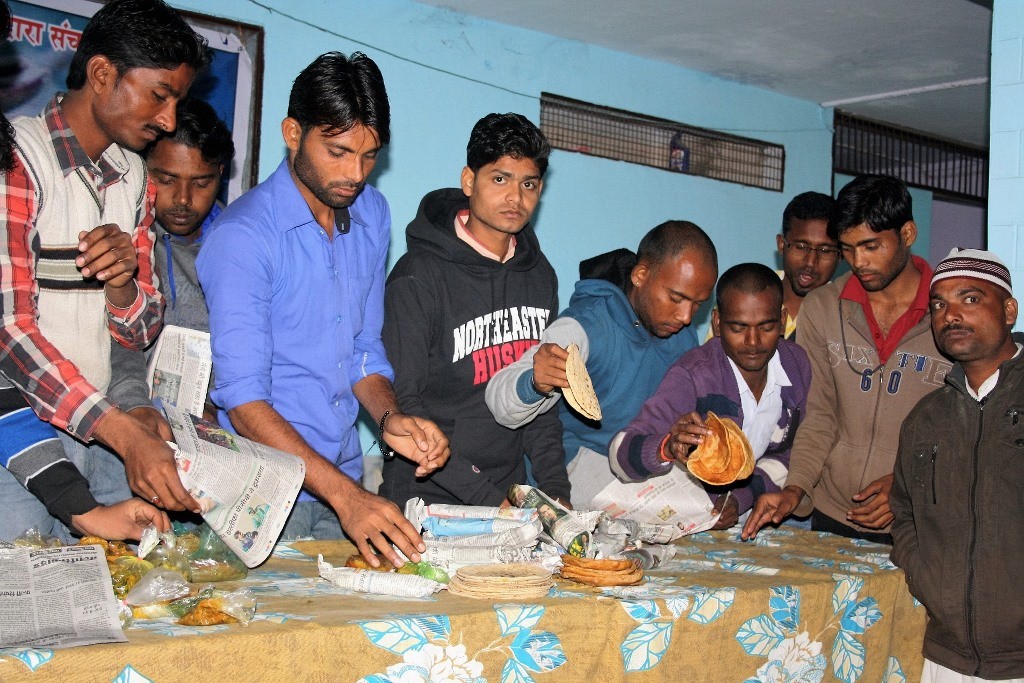 An hour later, they gather in the office of Roti Bank, a single room tenement which also serves as residence of old bachelor Haji Muttan. The rotis and vegetables are segregated in the verandah outside the room on a 10×2 table and stored into separate bags. Then the volunteers troop out on roads on motorbikes to look for poor and destitute.

Besides feeding people on the roadsides, they visit four Kanshi Ram Colonies, located in each direction of the city, to dole out food to seniors, widows and children who have nobody to look after them. 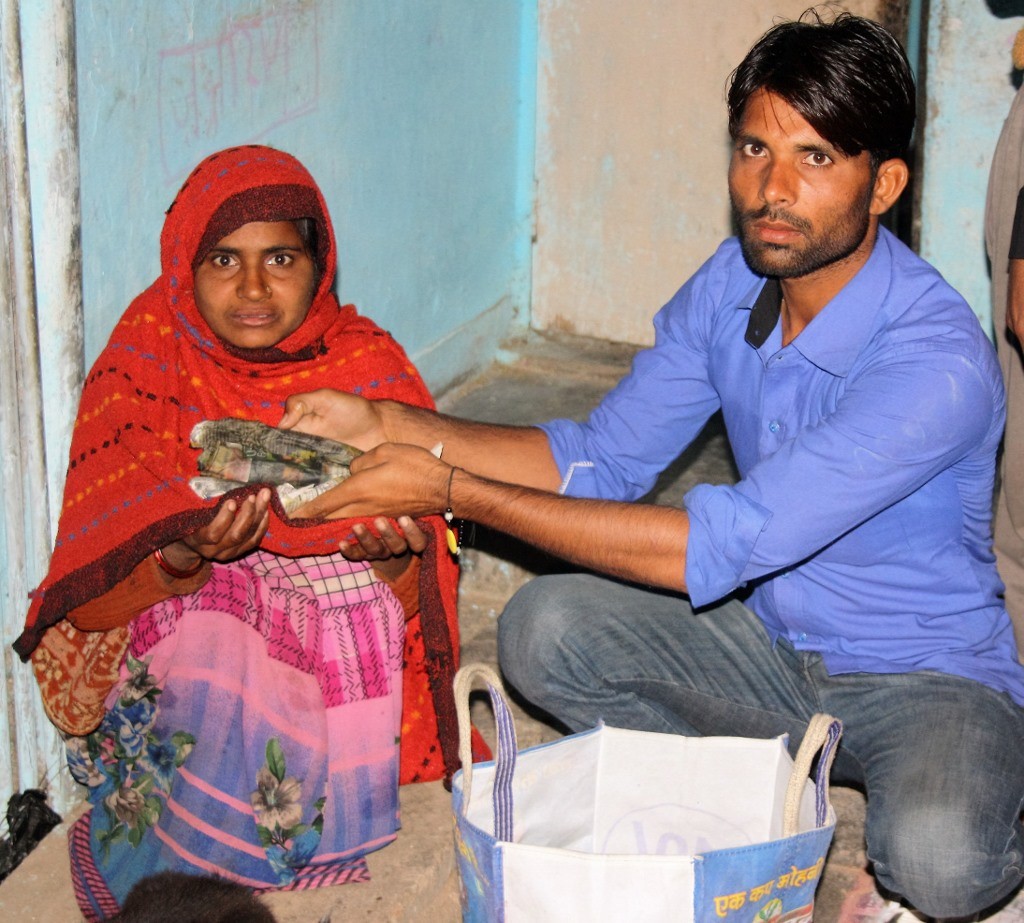 On certain days, Lavan Masih, Father in a local Catholic Church joins them in the distribution. Every time they fall short of food packets, they rush to Babli Dhaba, a Punjabi eatery in the centre of the city run by Pramod Kumar, a local Sikh man. Kumar (yes, he suffixes Kumar and not Singh to his name) cooks to make up for the deficit.

Muttan, Patkar, Masih and Kumar are part of a Roti Bank, which has fed on an average over 450 poor every day in Mahoba, a city in Bundelkhand region of central India, for more than eight months.

The project, working under a tagline ‘Nobody should go hungry, nobody should sleep empty stomach’, runs under the aegis of Bundeli Samaj, a non-governmental organisation (NGO), floated by Muttan and Patkar (46), also a bachelor, along with over dozen other members over five years back. 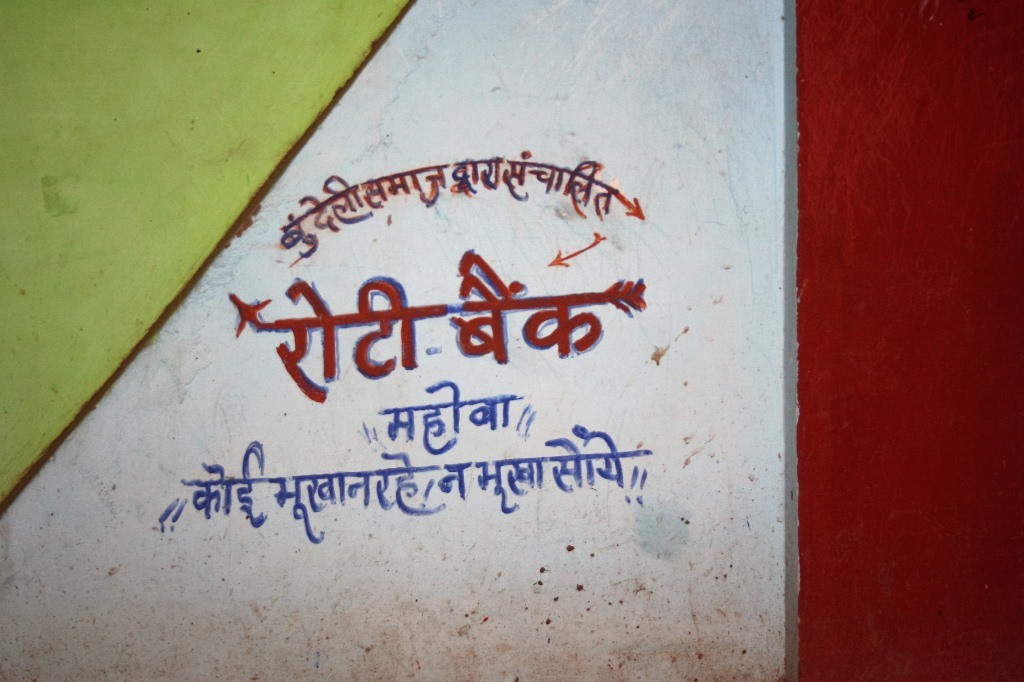 What makes the Roti Bank more incredible is that it functions in Bundelkhand, a territory which makes frequent headlines for successive draughts, deaths caused by starvation and eating of grass by local population due to failure of grain crops.

In fact, a survey conducted by Swaraj Abhiyan, a group formed by Aam Aadmi Party discards Yogendra Yadav and Prashant Bhushan, reported last month that the region witnessed over 100 deaths due to hunger and malnutrition between the months of April and November last year.

There is an interesting story behind how the Roti Bank came into being. This happened sometime in April last year. A beggar approached Patkar seeking alms in the form of money. When Patkar asked him what he would do with the money, the latter said he would buy food with it.

When his query induced a reply in the affirmative, Patkar and his 10 friends started feeding the poor. On day one (April 15 last year), they fed five beggars. Within a fortnight the number grew to 60.

In June last year, Patkar and Muttan, Convener and President of Bundeli Samaj respectively, decided to name the exercise Roti Bank, patterning it after Ram Naam Bank of Lucknow where devotees are asked to scribble name of Lord Ram as many times as they want and can on a piece of paper and are then issued deposit slips for the count. After all, both the banks, according to Patkar, are concerned about afterlife of the person.

Recently, the Roti Bank extended their activity to Chhikhara and Mullah Khoda, two villages located in Kabrai sub-division of Mahoba.

They soon plan to branch out in all 13 districts (seven in Uttar Pradesh and six in Madhya Pradesh) of Bundelkhand, the perennially rain-deficient region. The philanthropists also wish to place food collection boxes outside popular shops in Mahoba’s main markets.

“I have visited friends at several places including Banda, Attara, Lalitpur and Orai. We are also looking at other villages,” 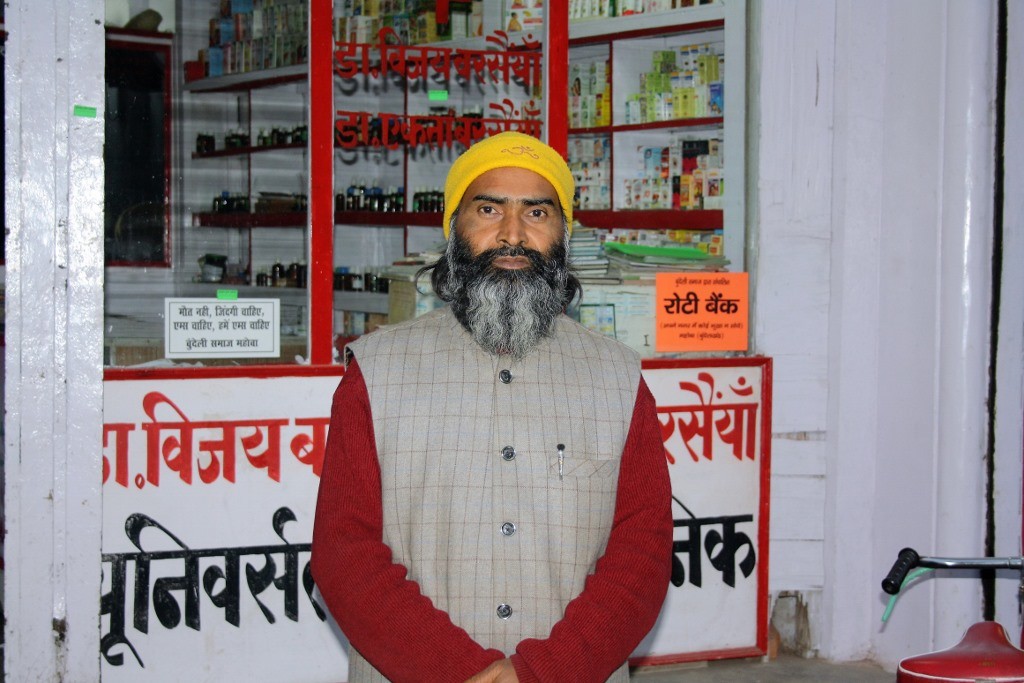 Tara Patkar outside a homeopathy clinic, a member of Bundeli Samaj runs

Roti Bank organisers intend to replace paper and polythene pouches with steel tiffin boxes soon and have already bought 200 boxes for the purpose.

“We are working out a system of how to circulate tiffin boxes and ensure their proper cleaning before re-circulation,”

More often than not, the Roti Bank volunteers, average two dozen on any given day, are offered rotis and vegetable only. But on festivals, they also get puri, subzi, kheer and other delicacies. Non vegetarian food, however, is a strict no-no.

“We have to keep sensitivity of our diverse clientele in mind. This is why we have restricted the bank to vegetarianism,”

informs Mohammad Rashid, a young volunteer in the group.

The Roti Bank wishes to reach every poor and hungry in Mahoba, a city of around 125,000 people. To achieve this, it has listed two numbers as its helpline. It has also got its name publicised at several prominent places in the city through bills, pamphlets and drawings. 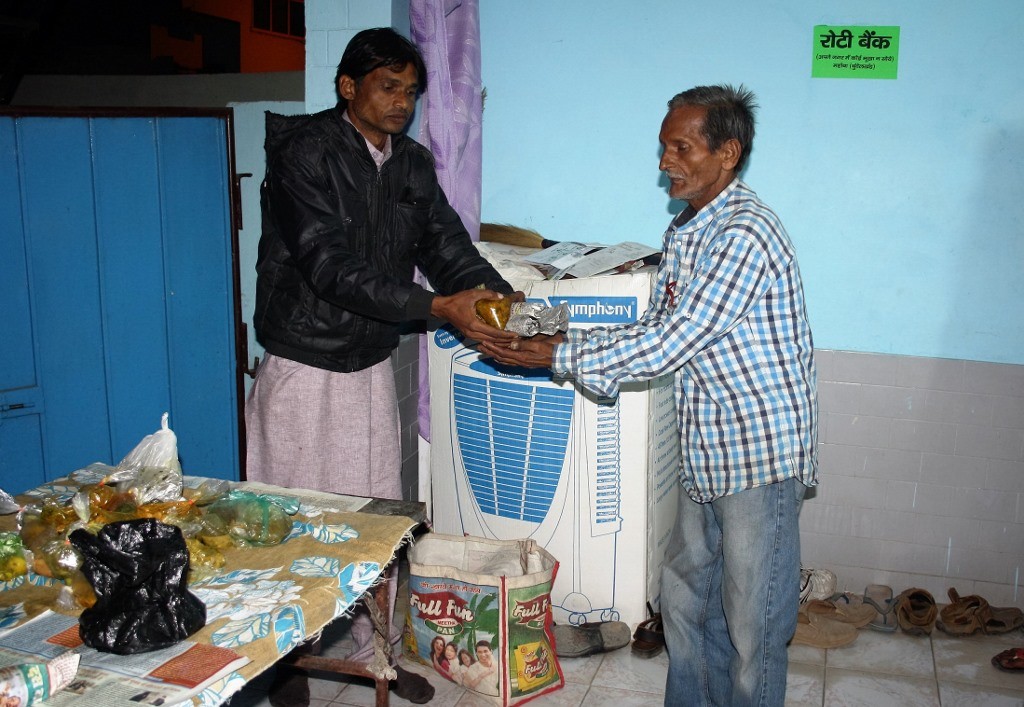 From January 7 this year, Bundeli Samaj has started feeding destitute in Mahoba all through the day, instead of evening only. It has designated 11 places in the city for the purpose where people can donate any time during the day rotis and vegetables which then is fed to beggars and other needy people. The NGO has also arranged for free medical consultation and homeopathic medicines for the sick.

To maintain harmony in the multi-religious group, Roti Bank members never discuss politics. Every time a volunteer comments on the performance or non-performance of a government or a political party, Haji Muttan silences him by raising his palm and saying ‘no politics’.The members of Bundeli Samaj together celebrate festivals belonging to all religions.

An example of this – last year men and women from among Hindus led by Tara Patkar observed Rozas (fasts) during the Ramadan. Earlier 5,000 Muslims wrote letters in Sanskrit to Prime Minister Narendra Modi demanding setting up a replica of All India Institute of Medical Sciences (AIIMS) in Mahoba. Overall, 1.5 lakh letters were written in 18 languages to the PM in support of the demand.

The NGO members also work together to revive water bodies in and around Mahoba. Along with school and college students, they have been labouring at a lake near Gorakhgiri hill on the outskirts of the city for over three months.

“We have increased the catchment area by 35 feet and dug the lake bed eight feet deep,”