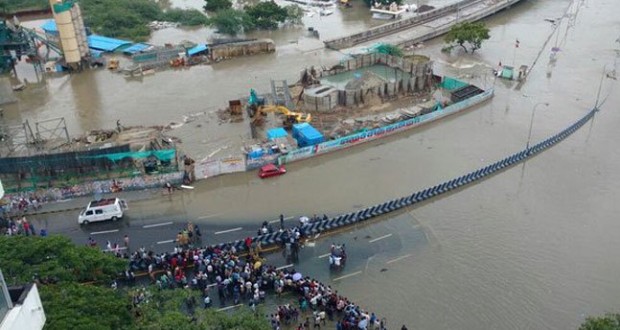 A submerged road in Chennai

Thiruvananthapuram, INDIA – Even as world leaders were meeting in Paris to address climate change, the city of Chennai (formerly Madras), the capital of the southern Indian state of Tamil Nadu, reeled under the onslaught of the heaviest rainfall in 104 years.

The city, home to five million people, has virtually shut down, with roads flooded and nearly 5,000 homes under water. More than 450 people have died. Air and rail services have been suspended, power and phone lines have been disrupted, and hospital patients are succumbing as life-support equipment fails. Victims had to be rescued in boats by India’s army and air force.

It is difficult to imagine India’s fourth-largest city – schools, colleges, IT companies, factories, and commercial establishments – being brought to a halt. And yet global automakers such as Ford, Daimler, BMW, and Renault took the unprecedented decision to halt production at their local factories. The venerable Chennai newspaper The Hindu failed for the first time in 178 years to bring out a print edition, because its employees couldn’t get to work (though it gamely produced an online issue).

Inevitably, many linked the flooding in Chennai to the talks in Paris, seeing the devastating rains as proof of the catastrophic consequences of human action on the world’s weather. More such disasters, they suggested, are inescapable unless world leaders in Paris take decisive action to limit global climate change.

Indeed, scientists predict that India will become significantly hotter over the next few decades, and therefore more prone to a range of weather-related calamities such as droughts, floods, crop failures, and cyclones. Chennai, they say, is just a warning.

But another factor arguably offers a more proximate explanation for what went wrong. It is normal for India’s east coast around Chennai to suffer heavy monsoon rains at this time of year. And, although this is the most severe precipitation to hit the region since 1911, the flooding was also the result of human error: the irresponsible and unplanned urbanization that has transformed India in recent decades.

In virtually every affected area, the flooding can be linked to ill-planned construction, which has taken place without regard to hydrology or Chennai’s natural ecosystems.

Norms set by the Environment Department of Tamil Nadu have largely been ignored, because politicians make common cause with builders in the name of development.

As a result, airports and bus terminals have been built on floodplains; warehouses and factories on wetlands and marshlands; and housing projects on former lakes. Drainage courses and catchments have been fair game for developers. Bypass roads and expressways have sprouted up without regard for data on water flow in the city. 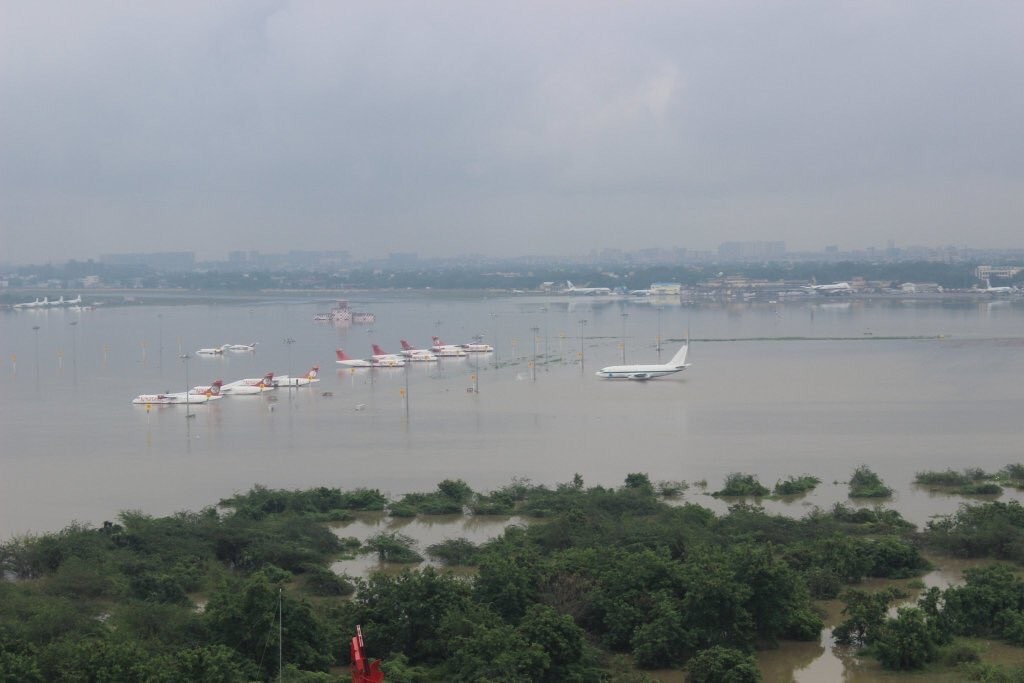 The result has been rapid degradation of water bodies. Because construction has occurred with scant regard for the provision of adequate waste disposal and sewage systems, the city’s rivers and canals have become garbage dumps, so choked that they can no longer serve as effective conduits to channel rainwater to the sea. Likewise, the destruction of crucial wetlands and inadequate infrastructure to contain flooding means that rainwater runoff has nowhere to go.

The same phenomena can be found in dozens of Indian cities. Urbanization is inevitable: an economy of 1.2 billion people cannot employ two-thirds of them in agriculture and hope to grow; rural people will inevitably move to cities to seek work and better lives. India’s urban population has risen from 10% at independence, less than seven decades ago, to almost 40% today. It will not be long before a majority of Indians live in cities. But those cities cannot all grow the same way as Chennai has.

Many Indian cities have a higher population density than Chennai, and a similar catastrophe in Kochi or Thiruvananthapuram could lead to much higher casualties.

We need to rethink our city drainage systems, rework our disaster-management institutions, and ensure that monsoon rainwater can drain out of our cities in the shortest possible time. 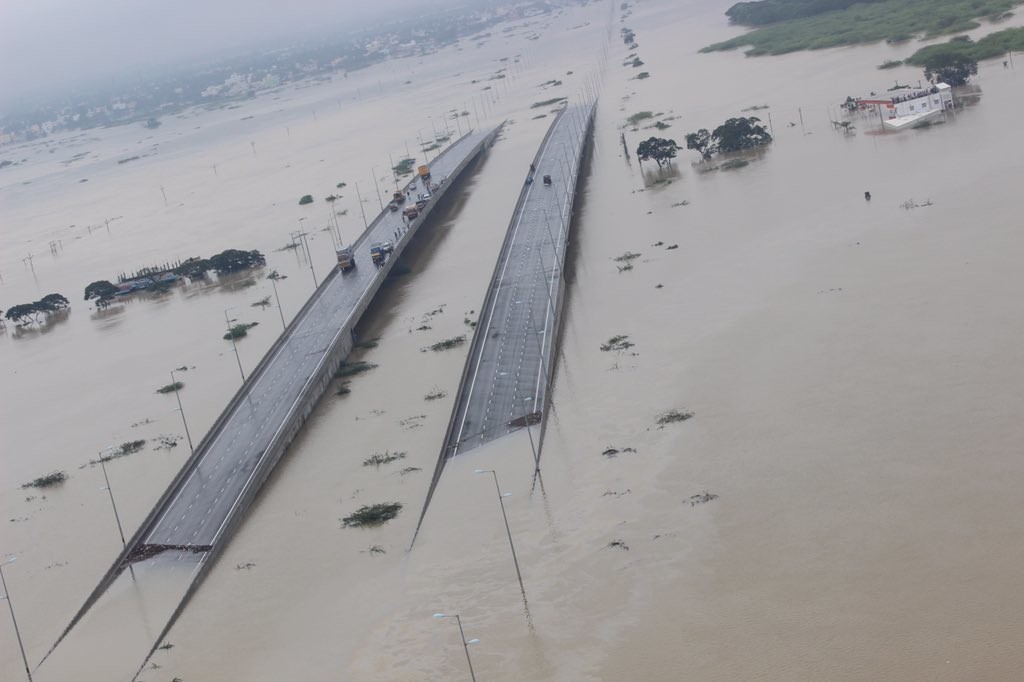 A submerged bypass – Result of rapid, irresponsible and unplanned urbanization in Chennai

The Chennai tragedy is a wake-up call to India. The disaster could have been avoided if strict measures had been taken to preserve water bodies and respect environmental imperatives. If we get our priorities right, we will heed the lessons of this horror and create urban space only in environmentally sustainable ways. If we see Chennai as a one-off event, an “act of God” rather than an error of Man, further disasters will be unavoidable.

In line with the Modi government’s slogan “Make in India,” the country is planning to build a hundred “smart cities” to bring hi-tech growth to urban centers. But India’s cities must be smart in a low-tech sense, too. The lesson of Chennai is that we cannot let more construction, urbanization, and manufacturing erode our natural resilience to familiar monsoon weather events.

“Make in India” must not become the unmaking of India. 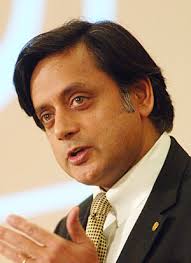 Shashi Tharoor, a former UN under-secretary-general and former Indian Minister of State for External Affairs and Minister of State for Human Resource Development, is currently Chairman of the Parliamentary Standing Committee on External Affairs and an MP for the Indian National Congress. Copyright: Project Syndicate, 2015
2015-12-11
Team PB7
Previous: Why Kejriwal is no longer an odd number in politics
Next: Why India and Pakistan met in Bangkok