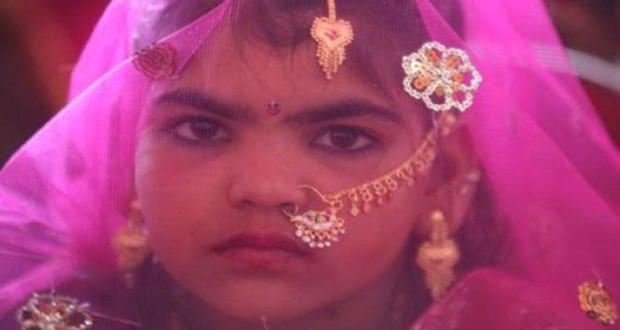 A teen girl in her marriage costume | Photo- Creative Commons

The United Nations calls child marriage a ‘violation’. Yet, despite its near total worldwide illegality, it continues to thrive in many areas of the developing world, writes Kevin Childs | New Internationalist

Recently, an interesting hashtag has been trending on Twitter. #TheStrengthToSayNo campaign is a joint initiative between Penguin Books and BetterIndia.com, and is inspired by the life story of Rekha Kalindi – a young girl who was starved and beaten by her mother for refusing to be married off at the age of 11. Seven years have passed since then and Rekha is now a champion girls’ rights activist, campaigning to end child marriage worldwide.

The fact is, it’s not just India that has a problem with early forced marriages; this is a custom prevalent in many different areas of the world. Unfortunately, as of today, 250 million girls, the equivalent to 1 in 3 of the total female population, were married before the age of 15. If current trends continue, another 140 million will be married by 2020. Often there is a significant age gap between bride and groom and, as usual, it is girls who are disenfranchised the most.

It’s easy to point the blame at the patriarchs of the developing world, who purvey religious doctrine and conservative belief at the expense of human rights. However, early forced marriages exist as part of a wider socioeconomic picture.

In cultures that favour sons over daughters, parents are often compelled to marry their daughters off quickly, both to cover the dowry cost and to obtain financial reward from the bride price. This practice is not wholly pernicious; in rural or impoverished communities dependent on agriculture or labour, large families eke out an existence to stay alive. Capital is a scarce commodity and girls are traded on the marriage market not only for economic reasons, but because marriage has a political value.

In local villages and communities, weddings are a way to consolidate power, settle feuds and form alliances. In this way, bride and groom become coins in a vast currency which keeps some developing nations afloat.

And yet circumstance cannot completely absolve men of responsibility. Religious traditions, and conservative beliefs, force women into the role of mother and housewife. Local dogma both creates and maintains gender inequality; in such cultures, customs such as child marriage quickly become the norm. Yet for those involved there are mixed views. Many parents know it is wrong but feel powerless to stop it. Others are adamant it is right. Many just don’t know.

What we do know is that girls who marry early are more likely to drop out of school and become dependent on their husbands’ wealth. They are also more likely to experience inter-spousal violence, marital rape and domestic servitude. Finally, they often have no control over their reproductive rights.

Every year 70,000 newlywed girls die in labour because their bodies aren’t ready for childbirth.

Even with the best intentions, wedded females face a lifetime of limitation.

It’s a fundamental right that girls are able to choose who they marry, when and where. They need to be at an age where formal and informed consent can be given. If we are to help females unlock their potential, we must encourage them to stay in school. Education is key to self-empowerment and filters down to all other areas of life. Livelihood, sexual health, family planning, freedom and confidence all begin in the classroom.

Of course, there is always a need for international investment, but the real solution must be found at a grassroots level. To eradicate child marriage, there needs to be a shift in hearts and minds. This is why activists, journalists and NGO programme workers can all play a vital role in raising awareness. The good news is that more and more governments are making concrete commitments to end child marriage, and even in impoverished communities the custom is increasingly outlawed.

Rekha Kalindi has managed to break free, against all odds, but many more young women remain trapped. Right now, every 2 seconds a girl under the age of 18 is married. The numbers involved in this human tragedy are staggering: 38,000 a day, 270,000 a week, 1.1 million a month, and 14 million a year.

We can all play a part in making sure they, too, have #TheStrengthToSayNo.

Previous: Toilet talk: meeting one of the world’s grand challenges with innovation
Next: The Paris climate summit must go beyond mere declarations of intent