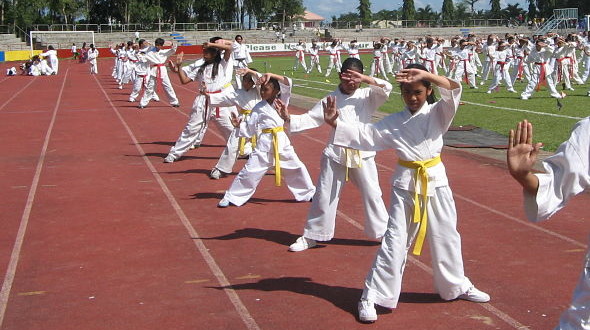 ‘Kickbacks’, in India, generally refer to bribes and corruption. Fairly commonplace. Not really news. So I almost skipped reading the Times of India story about a 16-year old girl, ‘the Kickback kid’ as some reporters have canonised her.

The girl, let’s call her Konkona, was returning home alone, a few evenings ago, when she was attacked by 2 men. The drunken duo were on bicycles. They veered toward her hurling filthy abuse, then they lunged out, knocking her to the ground. One of them attempted to drag her away. At this point, Konkona decided to use her newly acquired karate skills.

She lashed out, kicking one in the groin and hitting the other strategically on the temple. Writhing in pain, they realised they were outclassed and had picked on a girl who was more than a match for them. The cowardly bullies fled. Konkona has become a hero overnight. Her unique victory has, naturally, created quite a sensation.

Konkona began karate classes in spite of her parent’s disapproval, because she was sick of reading repeated rape and assault stories. Her neighbourhood, Madhyamgram on the outskirts of Kolkata, was considered unsafe and few girls would venture out alone, unaccompanied by a male family member. A gang of aggressive goons had begun terrorising local girls for a while. Appeals to bystanders were pointless. People were too terrified of the gang to intervene.

Konkona was returning from her karate class still wearing a track suit. In most parts of India, other than major cities like Bombay or Bangalore, that’s reason enough to elicit nasty lewd remarks. Often a girl dressed in non-traditional clothes is dubbed ‘asking for trouble’. Konkona’s knockout karate kicks have delighted women and ‘liberated’ Indian men and sparked off interesting debates on self-protection in Kolkata. She hopes other women will be inspired to learn self defence, to fight back and not succumb to threats, or stay ‘safely’ indoors as ‘good Indian girls should’ according to local traditional society.

Konkona’s story touches a chord because a serious sexual offence was not easy to get away with in the Kolkata I grew up in. Then, if a man touched a woman inappropriately and she screamed, he would be beaten to a pulp by passersby. Now vigilante action is not the best solution. It could be, and was, misused. Yet how could Kolkata have reached a point where not one person intervened to protect a teenage girl who was being beaten up by 2 drunken louts?

My daughter reminds me that while it’s good that the media highlights sexual assaults in public spaces, that is merely 10% of the crimes against women committed. The other 90% of rapes and sexual crimes come from known predators. From within the family, from neighbours, from ‘respected’ community members. A blanket of silence usually descends to cover up the crimes so as to protect the family’s ‘honour’ and reputation. Almost always, no one likes to wash this filthy linen in public.

While we grapple with the problem and seek answers and solutions, it’s these rare individuals who bring hope to the larger community of women who have suffered in silence. Many for decades, scarred doubly, first by the assault, then by the pretence that it never happened. These girls and women are our heroes. They give others courage. They become role models, inspire debate and action.

Society moves forward, even if it’s just an incremental improvement in attitudes and opinions. So let’s salute Konkona. And may her tribe increase.

Previous: What makes Lalu an aid as well as an albatross for Nitish
Next: Men For Women At The Panchayat