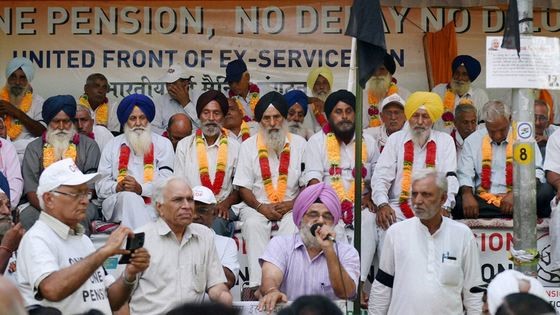 The government has announced the implementation of the long-awaited One Rank One Pension or OROP this afternoon.

Despite the huge fiscal burden, given its commitment to the welfare of Ex-servicemen, Government has decided to implement OROP. – Defence Minister

Close to 22 lakh retired servicemen and over six lakh war widows stand to be the immediate beneficiaries of the scheme.

Future enhancements in rates of pension to be automatically passed on to past pensioners. Pension would be re-fixed every 5 years . Benefit of OROP to be given with effect from 1st July, 2014; a date immediately after the present Government assumed office. Personnel who retire voluntarily will not be covered under #OROP scheme.

Meanwhile standoff by the veterans continues. Maj General Satbir Singh while welcoming the move also also expresses disappointment on some points. Says veterans have rejected government’s offer. Points out that it’s not OROP but one rank 5 pensions.

The twitterati report more on the announcement

DefMin @manoharparrikar 's statement on OROP a short while ago. pic.twitter.com/nzu13VlztM

Room 129D where @manoharparrikar and service chiefs are to declare govt’s version of #OROP. Historic, either ways! pic.twitter.com/6m0qkCzSWV

Maj Gen Satbir Singh: who ever gets pension (even if premature retirement) should get OROP. Bureaucracy introduced this. Not acceptable

Maj Gen Satbir Singh: we are satisfied with implementation of #OROP demand. Breaking on @IndiaToday. need clarification on VRS 1/2

Further enhancement in rate of pension will be automatically passed to past pensioners, bridging gap btwn current & past pensioners: Def Min — ANI (@ANI_news) September 5, 2015

I THINK WE WILL HAVE TO CARRY FORWARD THE AGITATION. WILL TELL YOU IN THE EVENING: MAJ GEN SATBIR SINGH #OROP

We also disapprove of setting up of one-member judicial committee. It should be under Defence minister and not given more than one month: Si

‘We only accept one point made by the government ie implementation of #OROP . Categorically reject everything else’ pic.twitter.com/VTzgaD5Rln — Firstpost (@firstpost) September 5, 2015

Previous: Requiem for the refugee
Next: The Number Game: Using Data To Enable Women’s Empowerment 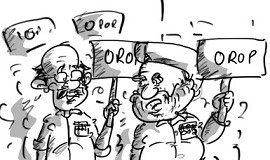 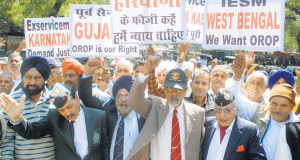