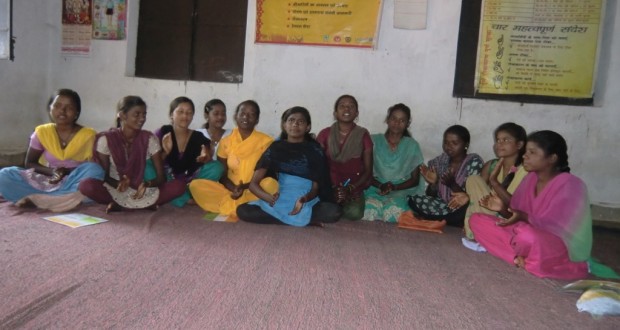 Members of the Kishori Mandal in Ranchi district get together once every week to review their micro-credit accounting and then discuss issues like eating healthy meals or standing up against child marriage. (Credit: Ajitha MenonWFS)

Ranchi (WFS) – ‘Kal Baisakhi’, or Nor’westers, originate in the Chhotanagpur Plateau, in and around areas like Ranchi and Jamshedpur in Jharkhand, in the months of April and May. These violent thunderstorms usually cause great destruction. Neetu Kumari, 15, of Jidu Pandra Toli village in Ormanjhi block of Ranchi district saw the thatched roof of her mud house scatter in the wind last May. The storm abated but the worry lines on her parents’ forehead deepened. That’s when Neetu stepped in.

“An asbestos or aluminium sheet roof had become necessary but my parents did not have the money. When I offered to pay, they could not believe that I could arrange for the money,” 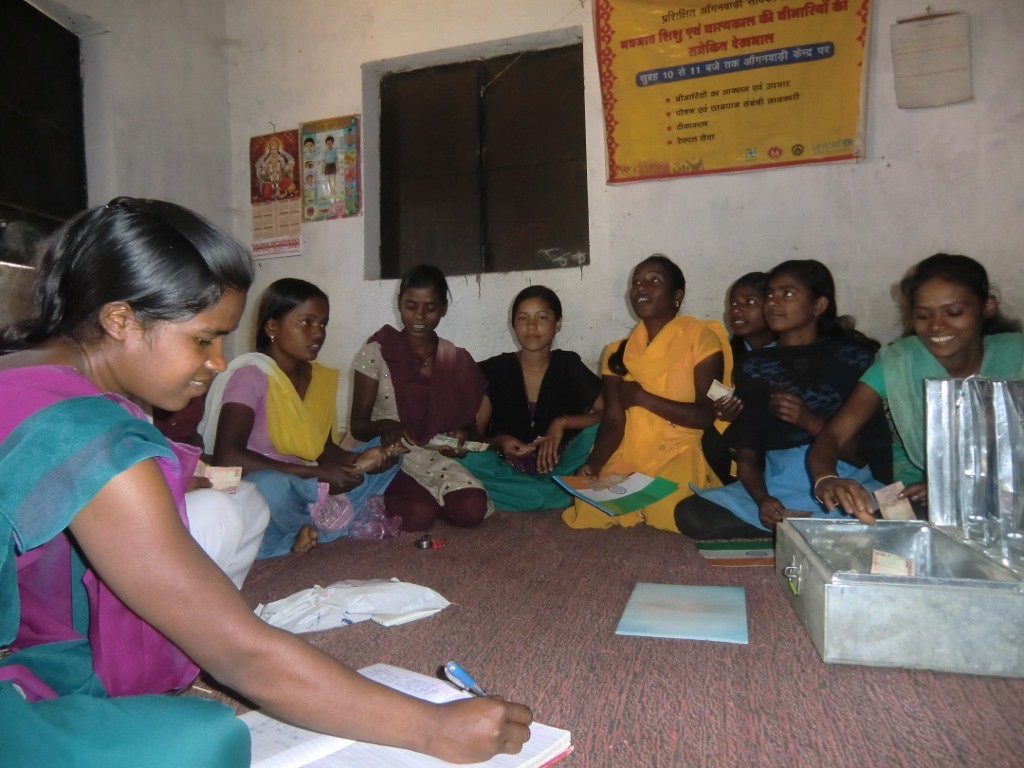 The girl gang of Jidu Pandra Toli Kishori Mandal takes a stock of their accounts as part of their micro-credit venture that allows them to take small loans as and when the need arises. (Credit: Ajitha Menon/WFS)

Adolescent girls in 70 villages of Ranchi and Hazaribagh districts have been mobilised under this intervention and groups comprising 13 to 15 teenagers have been formed in these hamlets.

“From adolescent and maternal health to sanitation and nutrition our volunteers have sensitised the youngsters on various issues.

Heightened awareness has enabled them to take these empowering messages to women and other adolescents in their villages. Many of them have set up a micro-credit corpus to save money for a rainy day,”

Manti Kumari, 18, who took a loan of Rs 2,800 from the Jidu Pandra Toli Kishori Mandal for the treatment of her sick mother, shares,

“In the beginning, although we were discussing health and sanitation issues, finance was on everyone’s mind. So with consensus we started the micro-credit venture based on Mahila Samiti rules.”

Interestingly, greater financial control has given them the power to improve the health, sanitation and nutritional status of their families. Like when Khusboo Kumari, 13, borrowed Rs 5,000 from her group, Rahat Kishori Samooh Tape, also in Jidu Pandra Toli, to pay the instalment for her father’s auto-cab.

“He was unable to raise the money for one month and I paid the EMI. In return, I got charge of the food management in the house.

Earlier, they never paid attention when I talked about eating better. Nowadays, I buy the vegetables and whip up tri-colour meals that usually comprise white rice, green vegetables and saffron tomatoes or papaya. It was a smart bargain,”

she says, with a smile.

More and more teenagers, who anyway are in-charge of cooking food in the household, have negotiated and got the right to decide on what is to be prepared on the basis of the emergency economic support they can provide through the micro-credit venture.

“Some of us have convinced our parents to build toilets after offering to pay part of the costs through loans taken from the group,”

Not just health and sanitation, these groups have been proactively preventing child marriages as well. According to Aarti Kumari, 15, President of the Chanchal Kishori Samiti of Palu village, which falls under Chutupalu gram panchayat in Ranchi district, girls have started protesting vehemently against early marriage with the strong backing of these groups.

“When you have 20 others standing by your side courage builds up automatically. The group is prepared to go to the police if required and parents and other villagers know this. There are no child marriages in our village anymore,”

Many of the older girls work part time and pay their contribution to the group from their earnings. Others save whatever little pocket money or household expense money they get to pay the weekly amount.

“The micro-credit venture has not just helped us gain a voice within the family but also enabled us to take decisions related to matters that concern us,”

says Parvati Bedia 19, who is doing her B.A. Part I at Ramgarh College. This resident of Jidu Pandra village has put herself into college and even fought an early marriage while she was in high school thanks to her group.

When she was in Class Seven, Parvati got admission into the Kasturba Gandhi Balika Vidyalaya, a government residential school, where she received free boarding and tuition till Class Ten.

“Things were difficult afterwards and I struggled to finish Classes Eleven and Twelve. In fact, I had no money for college admission when the Kishori Mandal provided me a loan of Rs 800,”

With access to loans, several girls like Parvati are paying for their education. Manti had first taken a loan of Rs 1,700 to gain admission at the RTC Inter College and another Rs 500 for books.

“I could take the loan for my mother’s treatment early this year because I had paid back my earlier education loan,”

Apart from funding their studies, the girls often borrow to buy sanitary pads.

“Parents don’t want to pay for sanitary pads. The ‘sahiya’ (government health worker) gives us a packet for Rs 6 but sometimes we don’t have that money. The group buys and keeps packets for emergency use from its funds.

At the same time, we talk to our mothers and ‘bhabhis’ (sisters-in-law) and peers about the benefits of using sanitary pads,”

As the micro-credit is central to their operation, when the groups meet once every week at a designated place like the gram panchayat office, the primary school or the ICDS centre, accounting is the first issue on the table. 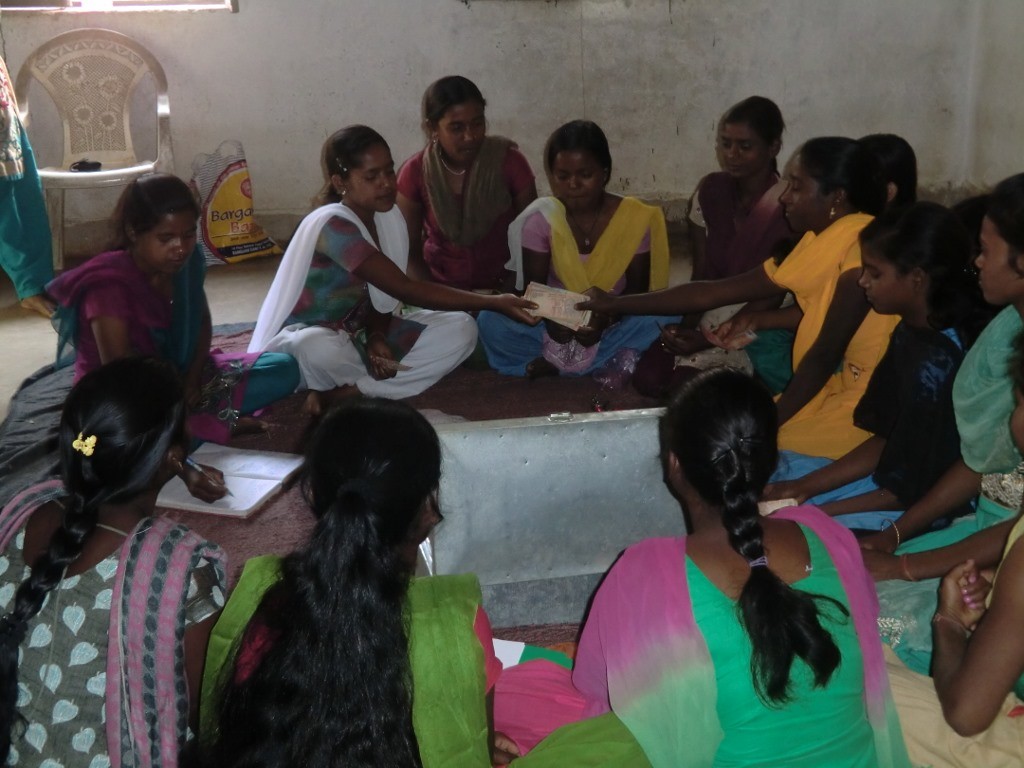 Members of a Kishori Mandal have to contribute Rs 10 each week and can borrow from the corpus at five per cent interest.Usually, girls take money to finance their education or pay for repairs at home. (Credit: Ajitha MenonWFS)

“We have strict rules. Loans carry a processing fee of Rs 2. Defaulters are fined as are the absentees at the meetings. The money box and the key are in the custody of two girls. If they are absent, they are fined Rs 5,”

Once the money matters are settled, the discussion opens out – usually to health matters.

“In our village no one is anaemic. We ensure that pregnant women, including our relatives, go for their antenatal check-ups, deliver in the hospital and avail postnatal care at the health centre.

We also create awareness on immunisation. Older women, as well as our fathers, brothers and uncles have started listening to us because they consider us responsible as we handle our own money,”

Girls who are part of the Kishori project are aware of the need for education, they fight to stop early marriage, talk confidently about contraception, maternal and adolescent health and buy sanitary napkins publicly with aplomb.

Most of this has become acceptable to their parents and the society at large because they astutely handle money. They earn, they save, they take loans, they provide financial help to the family during an emergency and most of all, they have good credit as a means for empowerment.

Previous: #ModiInDubai is hit on Twitter
Next: Let’s Talk About Rhinos