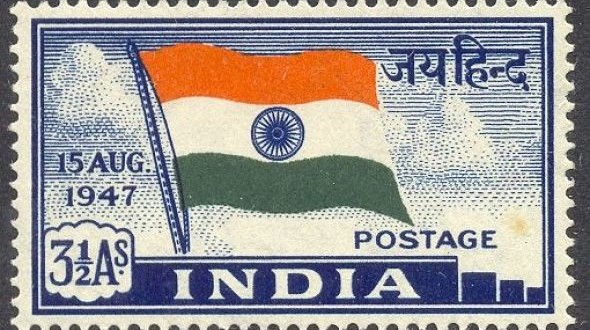 First stamp issued by India after independence. by India Post

The good, bad and ugly on Indian Independence Day

It’s Indian Independence Day on Saturday 15 August. Although this raises many questions as to what Independence means to the poor and wretched of our country, I will desist from the usual gloom and doom. Everyone needs to celebrate. And there is always a good story to gladden the heart, if you look around.

I found a lovely one in our local paper, The Hindu. A group of early-morning walkers (all Indian cities have them – mostly older folk walking determinedly to fight diabetes, high blood pressure, heart disease and/or obesity) discovered 2 village women in search of a college, at 6.30am. The young girl, Swati, had scored high marks in her final exams and had come in search of university admission. Her mother, Thangaponnu, was a shepherd. Unfortunately they’d come to the wrong city, reaching Chennai instead of Coimbatore. Both had a university named ‘Anna’ after a revered Tamil leader. The walkers’ group – Twalkers, they call themselves – taken by the tenacity and courage of the 2 women, bought them tickets on the next flight to Coimbatore. One brought them breakfast, another booked the plane tickets, and a third telephoned the Coimbatore University Registrar to ask him to hold the admission interview for Swati. Everyone pooled money to pay the fare, a little more than $156. Swati got her college seat. It was a heart-warming way to start the day.

There is, of course, ‘The Good, the Bad and the Ugly’. But even on the worst day I am flooded with news of people pushing forward, fighting to save the environment, for women’s rights, child rights, Adivasi and dalit rights and human rights in general.

Currently, the women of Tamil Nadu are demanding prohibition of alcohol in our state. For all the nay-sayers, the fact is women would not risk life and limb to converge on Chennai, our state capital, demanding an end to government-sponsored liquor shops unless they were in a pretty desperate place. Cane-wielding police reportedly lashed out at anti-alcohol protesters, mostly students. Political parties, predictably, jumped on the bandwagon to demand an end to alcohol. The state was shut down for an entire day. The women may yet get their way. They’ve done it before. They want an end to alcohol abuse, which has taken domestic violence against women and children to new heights.

Elsewhere, all over India, people are vociferously protesting the new wave of ‘development’ at any cost. In Goa, in Orissa, in forests around the country, environmental groups are fighting the corporatization of our country.

It’s not merely protests and negativity. Young people are turning their backs on the rat race and opting out. They are choosing change in the belief that they can make a difference. They are growing organic food, joining environmental battles, fighting for freedom of expression and against oppression. This takes a lot of courage, given the pressure on them to conform to modern-day ‘cool’ standards of owning the most sophisticated gadgets, weekend getaways, masses of money, eating at ‘Master chef’ Michelin-standard restaurants. Back to basics and simplicity is a pretty hard battle to win.

It’s not the majority of young people, obviously. Yet significant numbers want something better for themselves and their children. And though it’s currently a mere trickle, a drop in the ocean of globalization, the trickle has definitely started. Who knows, perhaps the tide will turn. And the pessimists will be confounded. After all, when all is said and done, what else have we got to hang our hopes on.