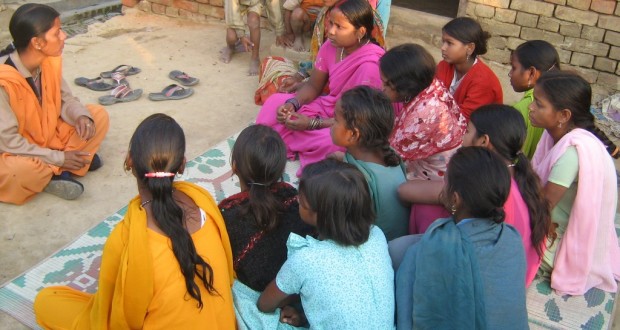 In Siddharth Nagar district of Uttar Pradesh, located 220 kilometres from capital Lucknow, a handful of adolescents have declared a war against child marriage, a common practice in the region. (Credit: Tarannum\WFS)

Siddharth Nagar (WFS) – Whereas she appears to be like any regular village girl from the vast countryside of Uttar Pradesh, quiet, unassuming and hardworking, Uma Kumari has more to her than meets the eye. This resident of Badgaon, a small hamlet in Siddharth Nagar district, located 220 kilometres from capital Lucknow, has distinguished herself as the architect of a campaign against child marriage, a common practice in the region.

According to the 2009-2010 District Level Health Survey (DLHS) and the National Family Health Survey – III (NFHS-III) data, 66.9 per cent of boys in the district get married before 20, while 66.2 per cent girls tie the knot before they turn 18.

Uma is a child bride herself. In fact, she is among the 8.9 per cent girls in the state who were married even before they could learn how to spell ‘shaadi’ (marriage in Hindi) on their writing slates in class. The daughter of a tractor mechanic, she was wedded to a young boy when she was only 10 as her father thought that being the eldest she should ‘settle down’ early. 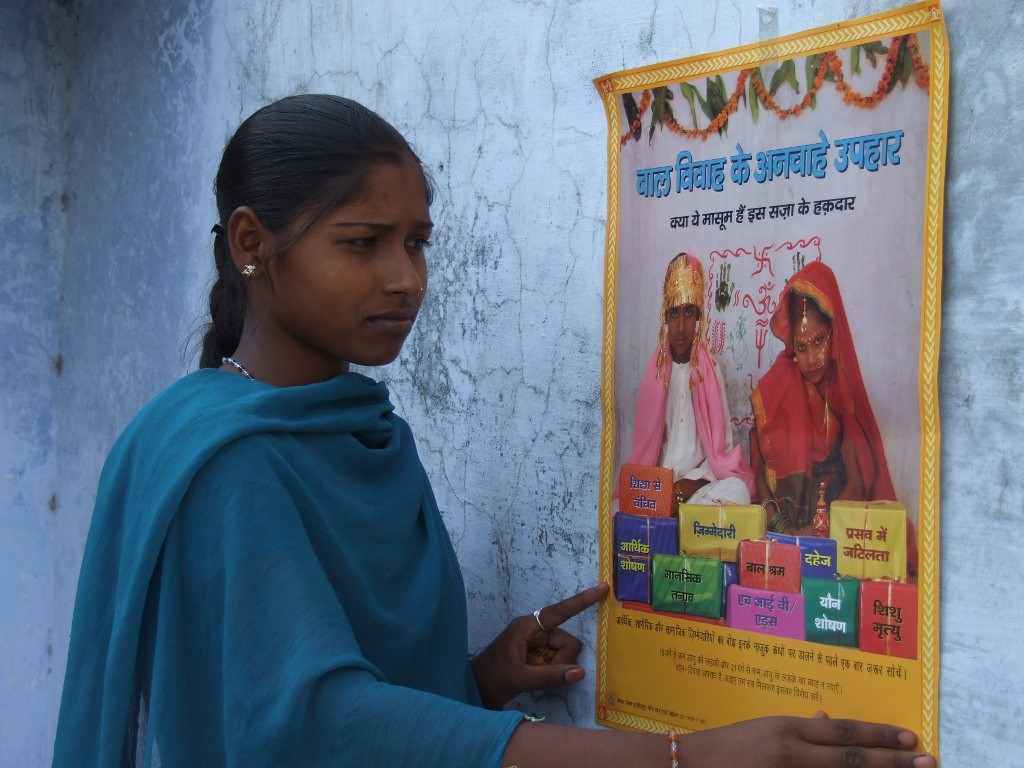 Uma Kumari, 17, of Badgaon village in Uttar Pradesh’s Siddharth Nagar district may be a child bride but today she is a crusader against child marriage and, in fact, a vociferous advocate of adolescent health and rights. (Credit: Tarannum\WFS)

“My father used to work in Saudi Arabia. After he saved enough money, he got me married as I am the eldest among seven brothers and sisters,”

reveals Uma. Fortunately for Uma, he had to wait for the ‘gauna’ – the formal ceremony after which the girl is finally sent off to her marital home – as he had to give a dowry with her ‘vidai’ (departure), which he still had to put together.

Left behind with her mother and siblings, she made up her mind to continue her studies. No one had any objection to this, as primary education is free. Then, a chance meeting with the volunteers of the Shohratgarh Environment Society (SES), a local non-government organisation, sometime in 2010 changed the course of her life and her views on marriage, sexual health and pregnancy. At the time, the SES was all set to initiate the Early Marriage and Early Pregnancy (EMEP) prevention project in Jogiya block of Siddharth Nagar.

Encouraged by her mother, Uma, who had “seen what early marriage and child birth had done to a few of my friends”, started attending the meetings of young adolescent boys and girls, who were slowly being roped into the initiative.

“Initially, it was tough for me to open up as I am also a child bride. But I found an answer to most of my queries during my interactions with them.

In fact, at times bhaiyya-ji who came to speak to us would laugh because I asked so many questions during the meeting,”

she recalls with a smile.

It was her zeal to learn more and influence many of her friends that saw her transform into a community leader. Her main task was to persuade villagers not to get their sons and daughters married before they reached the legal ages of 21 and 18, respectively. And, in case the children had been married off earlier – as had happened in her case – she requested them to at least delay the ‘gauna’. Indeed, Uma has set an example for the community by deciding to wait for at least four more years before she goes off to her husband’s home and starts living as a married woman.

Inspired by Uma, Geeta, 15, from Dohni village, lobbied in her own home to delay her marriage, even as her friends Durgawati, 15, and Beenu, 14, who were married early, have joined forces with them in a bid to delay their own ‘gauna’. Says Beenu,

“I want to at least complete my education and wait for another five years.” 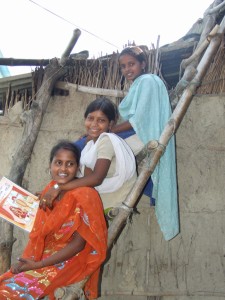 Geeta, 15, along with Durgawati, 15, and Beenu, 14, from Dohni village are fiercely lobbying to delay marriage of girls as well as their ‘gauna’ ceremony. (Credit: Tarannum\WFS)

Incidentally, these young girls are not alone. They have found equal support from the boys in their community. Shiv Lal in Geeta’s village knows the pitfalls of early marriage and is determined to help youngsters take the right decision for themselves. He says,

“I was married when I was barely 16. My mother used to be ill and my parents decided that we should have one more woman in the house.

But because of this sudden responsibility, I had to drop out of school and start earning. I know the ill-effects of early marriage.”

Of course, when there was talk of his younger brother’s marriage, Shiv put his foot down. He not only successfully stopped his wedding but also won his brother over to his side.

“I want my brother, Shiv Sahai, to study, earn and then get married at the right age,”

says Shiv Lal, who is also helping his wife complete her studies.

Like his older brother, Shiv Sahai, too, has been lobbying to stop child marriages in their village.

“Early marriages come with new set of responsibilities for which we aren’t ready, emotionally or physically. Youngsters end up with health problems as both the girl and the boy aren’t ready for marriage,”

he explains. He has decided that he won’t marry before 24 and together with another village youth, has been able to delay the ‘gauna’ of several teens in Dohni.

Influenced by the messages of youngsters like Shiv Sahai and Geeta, Deepak Yadav, 17, of Dohni, who was married three years ago, hasn’t brought his child bride home. Says the responsible young man,

“I know that I have to study and earn first. I want my wife to complete her education as well and only then will we begin our life as husband and wife.”

B.C. Srivastava of the SES believes that poverty, migration and the lack of health services are among the biggest reasons for the high instances of child marriage and maternal mortality in Siddharth Nagar.

“We are not only trying to delay marriages and ‘gaunas’, but are also trying to ensure that they stay on in school to continue their education. There is a lack of political will on the issue. The administration does not do much to check child marriages,”

Srivastava is truly convinced of the power of positive peer influence,

“Since these youngsters have already faced these problems, they are better equipped to help create awareness.”

And he is not wrong. Uma has single-handedly helped stop over a dozen child marriages and delay more than two dozen ‘gaunas’.

But while she is out campaigning she does not miss even a single day of school and has even asked her husband to complete his education.

“We could not stop our marriage but now I want to complete my studies and want him to earn before I go to live with him,”

she adds. This young crusader is definitely a trendsetter. Rural India needs youth icons like Uma.

Previous: Why is Pankaja Munde trending today?
Next: Abdul Basit’s Kashmir statement gets him trolled on Twitter