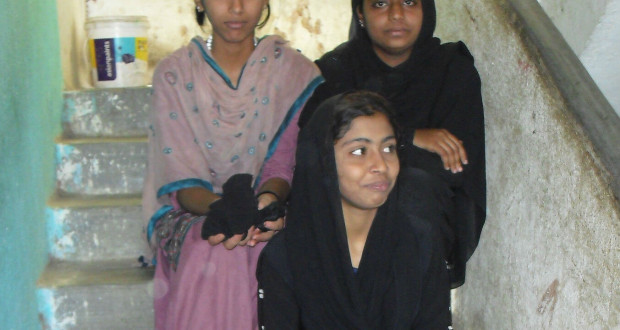 Mysore (Women’s Feature Service) – Saturdays are very special for Javeriya, 17. Come noon, she quickly changes from her traditional ‘salwar kameez’ into track pants and t-shirt, firmly laces up her trainers and heads to the field near her home for a gruelling, yet fun-filled, game of football under the hot sun. Javeriya, who hails from a conservative Muslim family, is a talented player. As she runs around the ground like the wind, scoring goals for her team, nothing seems to tire her out or dampen her spirits.

Looking at Javeriya today, no one would be able to imagine her as the reticent, shy girl she used to be till just three years back. This daughter of a truck driver from Mysore, Karnataka, had never really harboured any big dreams for the future. She was content with helping her mother around their house in Haleem Nagar slum, caring for her siblings and going to school. Even in class at the HUDCO Government School in Bannimantap, Javeriya would avoid drawing any undue attention to herself.

The youngster would have continued to exist in this state of anonymity had she not met Zaiba Taj, a mentor working with Magic Bus, a non-government organisation that uses sports as a means to empower some of India’s poorest children and young people with skills and knowledge to move out of poverty and take control of their lives. When Zaiba showed up at HUDCO school to motivate students to participate in sports after hours, Javeriya was full of doubts:

What would her mother say? How could she play with boys? Wouldn’t she make a fool of herself in front of the entire class?

As a worried Javeriya told Zaiba that neither would she get the permission to play and nor was she really up for the “challenge”, the feisty Youth Mentor laid her fears to rest by telling her that she could give it a try for a couple of sessions and if she didn’t like it there was no compulsion to carry on. Javeriya turned out to be a natural on the field and has not looked back ever since. Being part of the Magic Bus football team, she has travelled to the nearby cities of Bengaluru and Kodaikanal for matches, something she had never imagined she would do, and lifted the winner’s trophy on many occasions, making her parents proud.

In a sense, football has been Javeriya’s saviour – it has given a “purpose to my life; enabled me to lose my inhibitions”. Like her, at present there are around 20,263 children in Mysore, who are connected with Magic Bus’ highly successful youth programme that imparts valuable life skills through a specially-designed curriculum comprising sports and other “fun activities”.

According to Mrinalini Sanyal, State Head, Magic Bus-Karnataka, “We identify young, dynamic volunteers from within the impoverished localities in Mysore like Haleem Nagar, Bamboo Bazar and Gousiyanagar, among others, and train them to become mentors and leaders. They, in turn, talk to children about issues such as health and hygiene, the importance of schooling, child rights, the freedom to play sports, gender equality, and so on, through weekly two-hour sessions held in local government schools and their own neighbourhoods.”

In 2012, when Venkatesh N.T., Programme Manager, Magic Bus, was first given the task of introducing the concept of sports-for-development’ to empower children and bring change to their lives, homes and communities, he bought a football and started kicking it around the busy Bamboo Bazar area, inhabited by sanitation workers, domestic helpers, cobblers and scrap dealers. “We selected this area because 20 per cent of the children were not going to school. Parents would rather have them do menial jobs to earn some money. Moreover, the levels of hygiene here were dismal. I remember I had to play solo for nearly 15 days before a few children finally decided to join me,” he shares.

Once he had the attention of the kids, it was easy for Venkatesh to meet the parents and enlist their support as well.

“The elders helped us select prospective Youth Mentors and Community Youth Leaders, who could build and maintain a rapport with other children and rope them into our activities,”

In those early days, Venkatesh’s search for a Youth Mentor brought him to the doorstep of Triveni Dayanand, 21, in Bamboo Bazar. Although a college drop-out, Triveni was eager to finish her education and look for a good job but she couldn’t get herself to tell her parents about her aspirations. Says Venkatesh, “Triveni was enthused at the prospect of doing something for her peers but we had to persuade her parents. Things eventually worked out well and she was among our first few youth mentors to undergo training. Today, she is back in college and conducts sessions for over 700 children!”

Just like Triveni, Farheen Taj, 18, has come a long way from making ‘beedis’ (hand-rolled cigarettes) with her mother to enrolling into a nursing course as well as guiding children in Haleem Nagar slum in her spare time. As a Community Youth Leader, she spends one Saturday a month with her group of 25 children. Her assignment: to give the 7 to 14-year-olds an opportunity to tell their stories, express opinions and develop an understanding of concepts like equality and freedom. She does this using a variety of interesting games and songs. “I want to see each child in my group do well in class and stand up for their rights,” she says.

One of Magic Bus’ key missions is to keep girls in school – and that has saved girls like Lakshmi and Naziya Banu from missing out on their studies. While lack of funds compelled Naziya to give up school after her father passed away, Lakshmi dropped out when she was only nine and had to resort to begging to feed her siblings. Reveals Lakshmi, “Both my parents were alcoholics, and I had to support my little sisters. At one time, begging seemed like my only option. Thankfully, I was rescued by the volunteers of the Sarva Shiksha Abhiyan (Education for All Movement) and sent to the Urban Deprived Children’s Hostel in Haleem Nagar.” It was Zaiba, the Magic Bus Youth Mentor, who came across Lakshmi during a mobilisation drive in the slum. “Zaiba-didi insisted I enrol into school. Nowadays, I look forward to the Magic Bus sessions where I have made many friends,” she says.

For Naziya Banu it was Roohi Kouser, Youth Mentor in her Gousiyanagar locality, who became the catalyst for change.

“My mother was hoping to fix my marriage but Roohi counselled her that I would be of greater support to her if she let me study,”

she reminisces. Naziya has lived up to the faith reposed in her – not only is she a model student in school but she assists Roohi in taking sessions on gender and education.

Clearly, effecting change through mentorship and experiential learning has proved to be a game changer for these girls. Coming back to Javeriya, these days, she is busy packing her bags for her maiden trip to the US,

“I am one of the two Magic Bus players from Mysore who have been picked for training at the Julie Foudy Sports Leadership Academy in August 2015. I hope to become a football coach some day.”

“I want Javeriya to make a name for herself and we are happy she is getting the opportunity to go to America. As a reward, I have saved up to buy her a new set of leggings and top. And, yes, can’t wait to hear all about her trip!” signs off her mother with pride.

Previous: Healthcare For Women In Times Of Distress
Next: Surviving modernity: Matrilineal tribes lean on each other during tough times