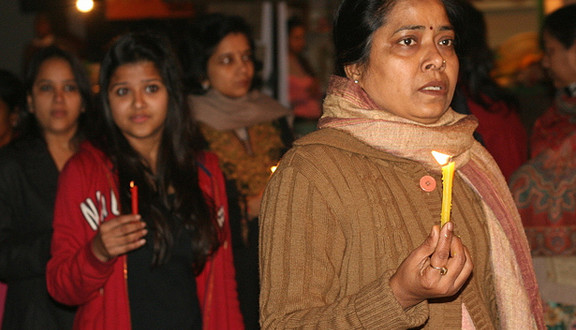 New Delhi residents march to pay homage to a gang rape victim who passed away in 2012 | Photo Credit: Ramesh Lalwani on Flickr, under Creative Commons

Most Indian newspapers have recently covered an unbelievably grotesque rape story about a 17-year-old girl who went on a date with a man she had met online, via Facebook.

She must have gone to her assignation with Bollywood-like dreams of romance and love, like a million young girls before her. Like others before her, cruelly, her dreams were reduced to ashes. Worse. The ‘hero’ arrived with a male friend. He took her at knife-point to an unknown destination where the two men raped her brutally.

Rape is now so commonplace in India that this story, nasty as it is, is not the stuff of headlines any more. It’s just another rape story. Even gang-rape doesn’t make headlines in these times. Boring. Happens every day. They also stole her mobile phone. This trivial detail plays an important role as events unfold.

Why this particular rape went viral was because the ensuing drama is a series of sequences so unprecedented, so beyond belief, that it had to make headlines. Apparently, the police official who dealt with her case decided it would be a brilliant move to use the girl as bait to catch the two rapists. So he ordered the girl to meet the rapist again so that the police could nab the culprits. The first attempt failed, because the cops tailed the girl so closely that the rapists got wind of their presence and fled before the police could move in.

Whereupon the cop asked her to try again! The gutsy girl obliged. The rapist contacted her and promised to return her phone if she met him again. Once more, in a secluded spot. She went off on a scooter, confident that the police were following her to grab the perpetrators. But the police botched the job.

In what I would call an extremely impertinent understatement, they lamely explained away the second failure as a ‘miscommunication’. Apparently they were not aware that the victim had gone ahead to keep the appointment with the rapists.

It must be noted that unlike Hollywood action-thrillers, apparently, our cops do not have wires and state-of-the-art communication facilities to track a decoy or the villains. So, the girl was raped a second time. If this were a Hollywood or Bollywood film, everyone would laugh. It sounds so implausible and so ridiculously far-fetched.

But it is high time we put an end to the sheer insensitivity, boorishness, gross negligence in dealing with crimes against our women. Every single day, women are raped, tortured and murdered with impunity in India.

The main problem is that although we have powerful women leaders, feminist-activist groups and women’s movements throughout the country, the law moves slowly, tortuously and mostly allows perpetrators to get away. There is a total lack of accountability and even women police officers appear blasé and cynical.

I have personally taken a rape victim to the police station. Five years later, nothing has happened. Justice is just another word. We have all-women police stations. But the women police showed scant sympathy. No empathy whatsoever. They didn’t seem to care about justice; they appeared indifferent and uncaring.

Unless we have radical reforms and a complete rehaul of our justice and police departments, the wheels of justice will continue to grind slowly, inexorably and pointlessly. All the while, our women will continue to be molested, tortured, raped and murdered. For how many decades will this continue? What can we do to speed up the process?

I must confess, I am frustrated, angry and demoralized. Not a good note to end on. But that’s reality. That’s just life for millions of our women.

Previous: There is Something Seriously WRONG with the World Cup Pay Gap
Next: Scaling New Horizons With Daring Dives