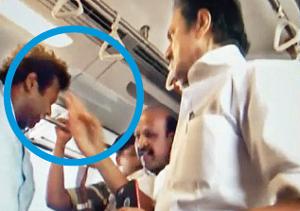 A video of Tamil Nadu’s DMK leader Stalin slapping a man in the Chennai Metro has gone viral. This news comes on the day when social media has already been ranting against VVIP culture. Here are some choice tweets from #Stalin and scroll on for tweets on #AirIndia

When I saw that Stalin was trending, I thought the time had come for his evil cryogenic reawakening. Thankfully not & it’s about @mkstalin

It’s all in the name

MK Stalin living up to his last name ‘Stalin’ #EndVVIPRacism

Stalin is just continuing the goonda politics of his father. Total goons these DMK wallas.

#Stalin is not in the BJP. You’ll have to sack him.

Nothing manly about a slap

@timesofindia Mr.Stallone Stalin,dat ws a well-executd back-handd slap.Own up n apologize d public 2 whom u hv been lying so far. Be a man!

There has been a lot of anger among the public over the news that to accommodate Union Minister Kiren Jijju on the Air India flight taking off from Leh, three passengers were made to deboard. Predictably, Twitter was filled with much ire.

Foreigner: I love India Indian: But u’ve never experienced it! I have! Right here on Air India <Foreigner gets chucked out> Kiren Rijiju: Hi

Not hard to believe

Best with Air India is that whenever it’s flight get late due to a VIP, they say that it was due to a technical error & it looks real also.