What's Trending
Home > News & Politics > Ghettoisation – nothing communal about it 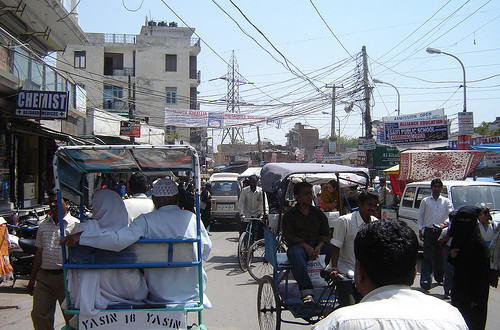 it is unacceptable to say that ghettoisation applies to Muslims or works on communal lines alone.| Photo: Twocircles.net

It was during the summer of 1989.  India was about to elect its first coalition government headed by Vishwanath Pratap Singh and I had joined my first government job in Allahabad.

I was looking for a rented accommodation in a Bengali Tola near Bahraina, a settlement about seven km before Sangam, the place where Ganges, Yamuna and mythical Saraswati merge. The settlement was close to the residence of a distant relative of mine where I had stayed during my initial days in the city.

I was forewarned by a Bengali friend that it might be very-very difficult to find accommodation in the Tola as the Bengali families preferred tenants from their own community only. For 15 days, we knocked from door to door in the around 100 house settlement bounded by road and railway track in two directions each. The old, cemented bungalows, turned black at places due to moisture, were mostly multistoried and accommodated tenants on first and second floors.

Yet there was no room for me, a North Indian who did not eat fish and rice (machhi bhat).  The close knit Bengali society looked at me as an intruder who could give it a cultural shock, damage its distinctiveness. It did not want an outsider to share its closely guarded mores – culinary preferences, music & literary interests and marriage rituals etc.

There was nothing communal about the denial. I never felt discriminated against.The refusal never became an issue in the press – only had newspapers and magazines then. Rather I happily migrated to Meerapur, a locality dominated by North Indian Punjabis, where I felt much more at home.

Contrary to what happened in the recent case of Misbah Quadri (she was turned out of a flat in Wadala for being Muslim) in Mumbai, no liberals made a majority out of the residents of Bengali Tola and minority out of me. They could have as not many Haryanvis lived in Allahabad then. Nobody called it discrimination.

In fact as a norm, the liberals never do when it is about Bengalis, Tamils, Andhraites, Kannadigas, Keralaites, Biharis, Gujaratis and Kashmiris.  The courts in India and the governments have for long been trying to protect Jarawas, an aboriginal tribe in Andaman & Nicobar Islands, from contact by outsiders.

Go to any country and you will find that the rule applies to different nationalities living there too. Singapore, for instance, has Chinese and Indians living in segregated China Town and Little India respectively.Even in London, the Asians are confined to particularly settlements. Therefore, it is unacceptable to say that ghettoisation applies to Muslims or works on communal lines alone.

Back in India, Tibetan refugees live in ghettos at Mcleod Ganj (above Dharamshala in Himachal Pradesh), Majnu Ka Tilla (on outskirts of Delhi), Bylakuppe (Karnataka) and many other places.

It is determined more by language, cultural ethos, culinary habits, distance from native place, dress sense and celebration and mourning rituals of a community. It is common sense that an outsider may not feel comfortable in a Gujarati settlement (there is a Gujarati slum near Shadipur depot).

In Delhi, for example, you have migrants from Rajasthan mostly settled in Western and Southern parts of the city.  Haryanvis, particularly the ones belonging to Sonepat and Panipat belt, prefer to live in Rohini which is close to national highway one. People from Uttar Pradesh are largely settled in East Delhi.

Moreover, ghettoisation is not always forced upon a community. To the contrary, more often than not, every community relishes living in a settlement exclusive to it. An outsider living in such settlements could feel like a fish out of water. At times such settlements, apart from creating a large family like atmosphere, also give its residents a sense of security and belongingness.

This is precisely the reason why Kashmiri Pandits would not want to return to Jammu & Kashmir unless they are rehabilitated in special enclaves. Even in Delhi, the Pandits are concentrated in certain pockets. A good number of them, for instance, have settled in an unauthorised Kashmiri colony in Najafgarh. A Kashmiri living in a place inhabited by Punjabis may feel the same way a Muslim would feel living in a Tamils-alone colony.

Considering that communication is a two-way street it may not always be appropriate to blame majority community for isolation of an outsider family. It would be no less incumbent on the outsider to break the ice.

A Muslim family, which moved into our society in Vaishali (Ghaziabad) in a row opposite to my house over eight years back, always preferred to live in splendid isolation. The family fiercely guarded its privacy till it sold off and shifted to a new place.

Moreover, prevalence of caste system in Hindu society hardly allows it to be a hegemonic whole to dominate against the minorities. To say that the majority community is to be blamed for denial of accommodation to India’s largest minority is like missing the woods for trees.

Agreed that ‘suspicion’ is one of the factors which contribute to swanky high-rise residents’ mistrust of Muslim tenants and flat owners.  But did it not happen to Sikh community as well when terrorism in Punjab was at its peak? Do we see any discrimination against the Sikhs now? Hopefully, once Islamic terrorism subsides, the discrimination too will disappear in thin air.

But to blame discrimination solely on religious grounds is a disservice to the nation and the society. Socio-economic factors are as much culpable. Poverty, illiteracy and backwardness in the minority community are no less put offs for the haves living in a skyscrapers. Otherwise how come we do not hear of such cases involving other minorities – Parsis, Sikhs, Jains and Jews?

Previous: Breaking The Barriers With The Power Of Press
Next: Fighting for India’s health