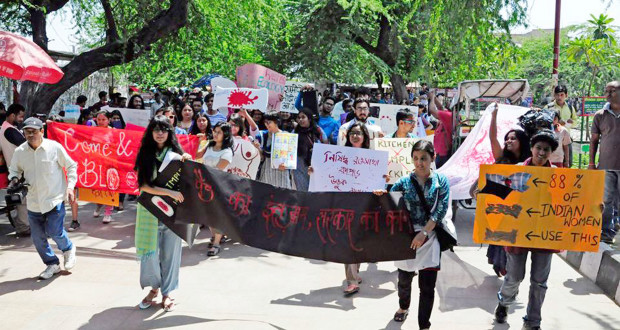 Kolkata (Women’s Feature Service) – Sanchita Dey, 17, lives in a settlement in the vicinity of the Netaji Subhas Chandra International Airport in Kolkata and goes to the Dum Dum Baidyanath High Secondary School nearby where the Class 12 student is gaining a decent education.But for all her prospects of a bright future, what Dey’s schooling has not been able to provide her with is the confidence to speak up for herself and her rights.

This daughter of a tea vendor dreads the days she has her periods because she is “compelled to use cloth, which apart from being really uncomfortable is unhygienic and gets soiled easily”. Try as she may she can’t seem to overcome her hesitation to ask her parents to buy her a pack of sanitary napkins.

“My father may be a tea vendor but he earns well enough send me to a good school. But when it comes to getting a pack of sanitary napkins my mother outright refuses saying that these ‘luxuries’ are not for people like us.

Although it is only an expense of Rs 40 a month she doesn’t want to ask my father for the money. Why can he blow up Rs 1,000 every week on alcohol while I can’t even be given a fraction of it to buy an essential hygiene product?”

Dey may be very angry at the unfairness of the situation but she cannot protest as “girls can’t talk about this with their father and my mother would not approach him with such a problem”.

Unfortunately, menstruation is still a taboo subject in India and feeds into the deep-rooted belief that women are ‘unclean’ and ‘impure’ during their period. However, if it is up to a bunch of vociferous university-goers then this reality may be on its way out sooner than later.

In March 2015, inspired by an international campaign, #pads against sexism, a group of students at Delhi’s Jamia Millia Islamia University decided to put up sanitary pads with feminist messages across the campus in an effort to raise awareness about rape and sexism.

The idea was to “to spread awareness … remove the stigma attached to periods, something extremely natural”. In an official statement, the young activists underline the thought behind the effort:

“This campaign was started by four students who live in a society where women cannot always walk down the road after 8 pm, without concern for their safety. We are among many who are disgusted and horrified by the December 16th gang rape of Jyoti Singh and all the rapes that have continued to occur after it. …We are students who strongly believe our society needs to stop being passive about rape culture and accept gender equality.

Label it feminism or call it being a sensitive human being, we understand the need for equality and safety for women as well as an end to violence against women … Our campaign is meant… to create conversation and debate within our college campus related to rape culture and stigma attached to menstruation. [It is] a way to push forward the conversation and debate of gender equality and anti rape culture in India.”

Today, from Jamia, this movement has rapidly caught on at other major campuses in India.Whereas students of Delhi University and Jawaharlal Nehru University recently expressed their solidarity through the ‘Blood On My Skirt’ march, with various participants declaring how they “don’t want the next generation to go through menstruation embarrassments that we have commonly faced”, across the country, at Bengal’s Jadavpur University, just a few kilometres from Dey’s home, students and teachers have come out in large numbers to break the silence.

“If we can talk about smart phones and fashion trends, why can’t we talk about sanitary napkins and menstruation?”

question Jayee Bannerjee and Arumita Mitra, who are leading the charge at Jadavpur. Together with other students they are part of a group, Periods, which has been formed to strike out against patriarchy and talk openly about menstruation, pregnancy, abortion, violence against women and other such subjects that usually get swept under the carpet. 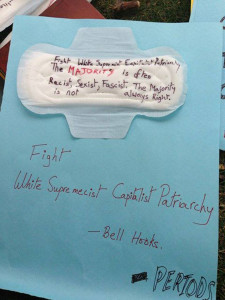 A section of students of Bengal’s Jadavpur University have formed the group ‘Periods’ to break the silence on menstruation by spreading feminist messages written on sanitary pads. Photo: Soumya Das Gupta

“Menstruation is a part of what makes us women, so why should there be a feeling of shame associated with it? We want to challenge that attitude.”

“In our society, everything conveniently favours the men. It is they who get to decide what is right and wrong; acceptable and shameful. While it is considered disgraceful for a woman to speak about menstruation and she is barred from stepping into a place of worship and often even isolated in their own homes, for men to suppress women through violence is not just admissible but, at most times, even a matter of great pride.

But the rules are changing and I am here to assert that menstruation is as natural a phenomenon as day following night and that I do not feel embarrassed to voice my feelings.”

The second year Philosophy student is quick to add that

“we are fighting against the taboo and also trying to draw the attention of the government to the make affordable sanitary napkins widely available so that all the girls can continue to go to school and do their everyday activities in comfort”.

Unlike Jamia, where the idea of putting up sanitary napkins with messages on campus did not go down well with the authorities, at Jadavpur teachers have readily joined forces. 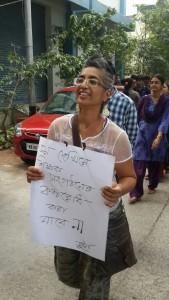 Rimi B. Chatterjee, an English professor at Bengal’s Jadavpur University, believes that #pads against sexism movement has shaken people’s sensibilities and given women the courage to stand up against social suppression. | Photo: Soumya Das Gupta

Rimi B. Chatterjee, an English professor, who is openly supporting the movement, says,

“Its sheer hypocrisy that prevents us from addressing the sexism that is present in our society. Menstruation is natural and the more we talk about it the more confidence girls across the social spectrum will gain to speak about it in their homes and schools.

I think this movement has managed to shake people’s sensibilities. Of course, we need to take the message into the hinterland as well because the issues around this are equally, if not more, acute there.”

Even though she feels that such a movement “will not change things overnight it will surely give women the courage to stand up against social suppression”.

For all those critics who feel that such a campaign is nothing but a sensationalist move Bannerjee retorts,

“This is a typically patriarchal response. If men openly harass girls on the streets and don’t hesitate before raping a woman why should women feel shy taking to the streets and discussing menstruation?”

As per a recent research by AC Neilson, over 88 per cent women use dirty rags, ash and husk during menstruation. Another study shows that 23 per cent girls drop out of school once they hit puberty because of the taboos they are subjected to.

Clearly, a lot needs to be done before the subject of menstruation does not make girls and women blush uncomfortably. As the controversial feminist author Tasleema Nasreen, who congratulates the students heralding the pads against sexism movement, says,

“If men had menstrual cycles, it would hardly have occasioned social shame for them. All those who believe that this campaign is in bad taste, I say, sexism isn’t in good taste, neither are sexual crimes, violence and rape. Then why should a protest against these be obliged to maintain aestheticism?”

“I wish that my college-going sisters and brothers continue to raise their voice on this issue so that one day it will become easy for girls like me to ask for sanitary napkins at home. After all, having a safe period is also our right.”

Previous: Indian prisons are overcrowded: 2/3rd of the inmates are undertrials
Next: India: Cinema That Is “Real” And Entertaining 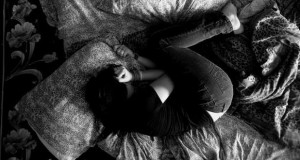