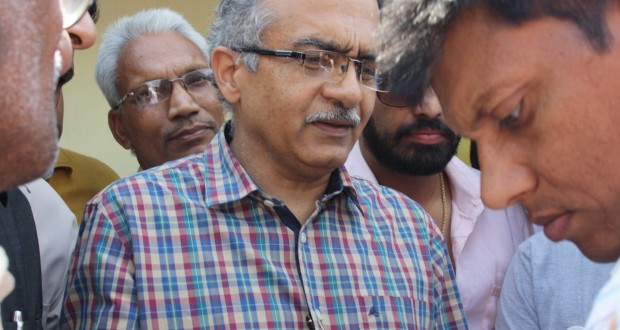 Gurgaon: “Why don’t we join Narendra Modi? He is also honest and a great believer of high command culture”, I hear a voice from the back of the auto rickshaw taking us to the venue of Swaraj Sanwad (Dialogue on self rule) that Yogendra Yadav and Prashant Bhushan faction of the AAP has organised.

“We joined AAP for participatory democracy and decentralization. How is (Arvind) Kejriwal different from Modi or for that matter Rahul?”

other dissenters who claim to have come from Bihar butt in. 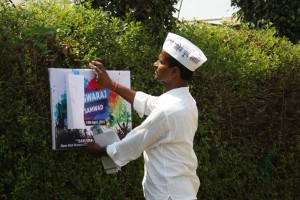 The voices build into a crescendo at Shubh Vatika, a banquet hall which serves as venue of the Swaraj Sanwad as volunteer after volunteer tears into Kejriwal for not adhering to what they call principles on which Aam Aadmi Party was founded.

They accuse the Delhi Chief Minister of abdicating principles like self rule, decentralization and alternate politics to secure power in Delhi.

They allege the AAP has been hijacked by people like Ashutosh and Ashish Khaitan who joined the party during last Lok Sabha elections.

Their allegation is that Kejriwal is promoting coterie culture at the cost of old hands who partnered him in setting up the party.

By afternoon when Yogendra Yadav and Prashant Bhushan’s supporters launch polls and group discussions on whether AAP is being run for Swaraj and whether the over 2,000 volunteers gathered at the Swaraj Sanwad should part ways with AAP or struggle from within to establish real Swaraj it becomes clear that they are preparing for a long haul and that it will be fight to be the real AAP. 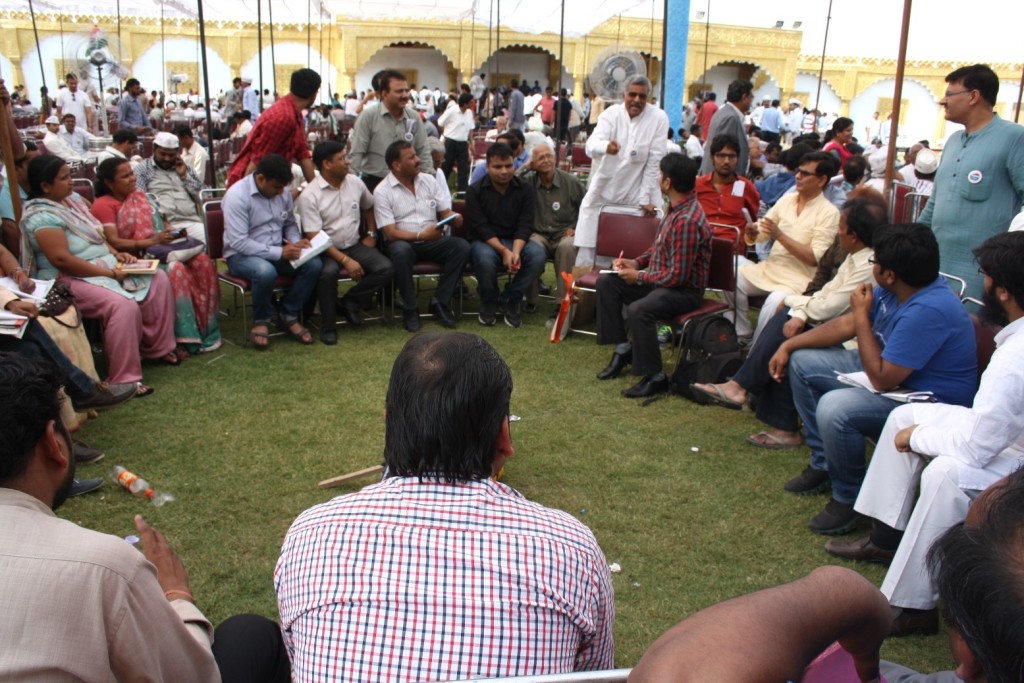 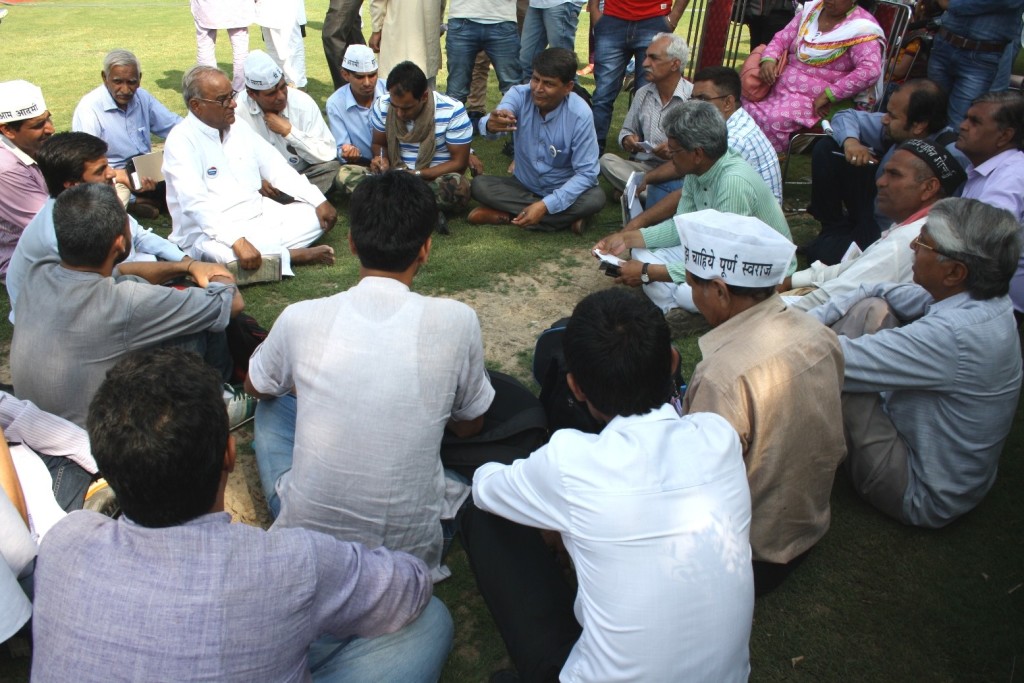 In the evening when the results of the poll reaffirm (70 per cent of 2157 volunteers vote against splitting AAP and for fighting from within. Only 25 percent are for formation of a new party) that for now it will be a war of attrition.

Yadav-Bhushan and Kejriwal will be like a couple which has separated for all practical reasons but will not grant divorce fearing that the other partner may get custody of the children and the inheritance.The former would want the latter to throw them out of the party so that they get sympathy and also the fringe workers who are till now undecided on whom to go with.

“AAM Aadmi AAP ki, Nahin Kisi ke baap ki (AAP belongs to volunteers. It does not belong to any one individual)”, a slogan which was constantly heard in the one day conclave will become louder in the next six months when Yadav-Bhushan and Kejriwal will fight for the volunteers. 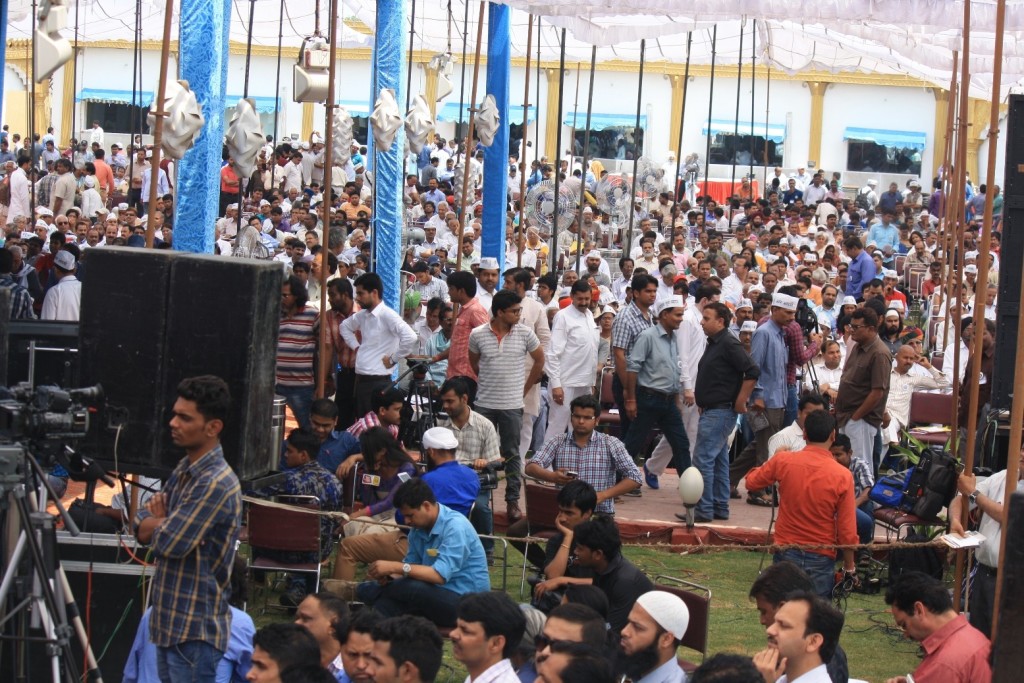 It is clear that Yadav-Bhushan is not satisfied with the over 2,500 volunteers they fetched from across the country for the Sanwad.

They are particularly keen that more AAP volunteers join their flank. 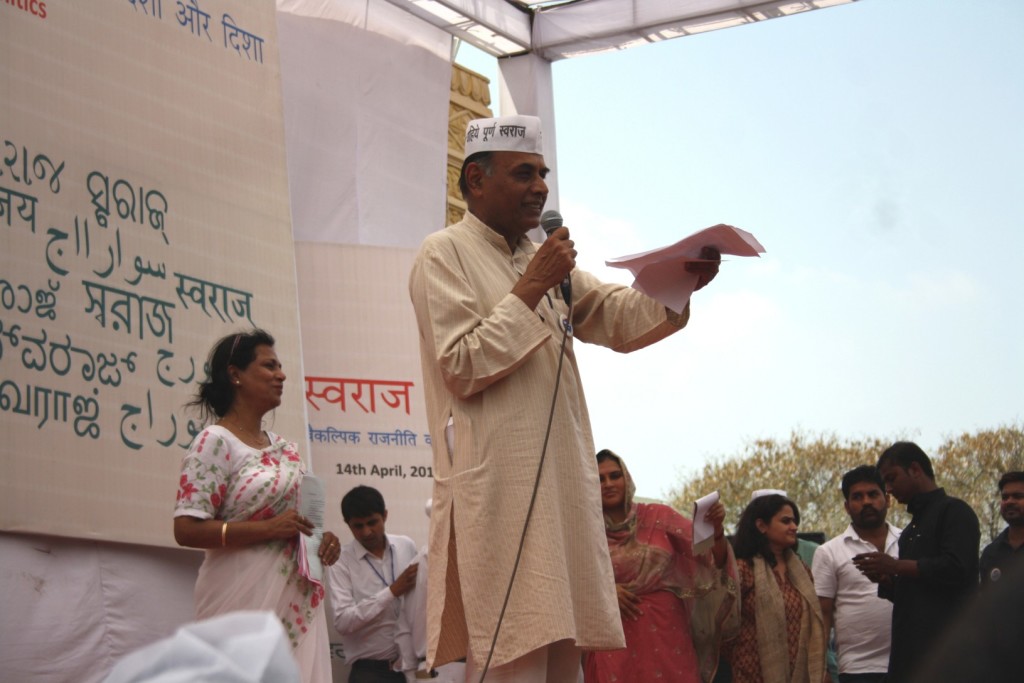 This is the reason why Prashant Bhushan launched a direct attack on Arvind Kejriwal for what he alleged development of coterie around the Delhi Chief Minister. He is expected to repeat his charge in the coming days to attract volunteers whom he calls ‘soul of the party, which should be preserved.’ The duo will target the around dozen Congress, Bharatiya Janata Party (BJP) and Bahujan Samaj Party (BSP) discards who have become MLAs in Delhi on AAP tickets.

Addressing AAP volunteers during the Swaraj Sanwad, Bhushan said that there were three options left before them of which one was to free the party from the ‘clutches of this coterie’, the second to form a new party and the third to start a movement. 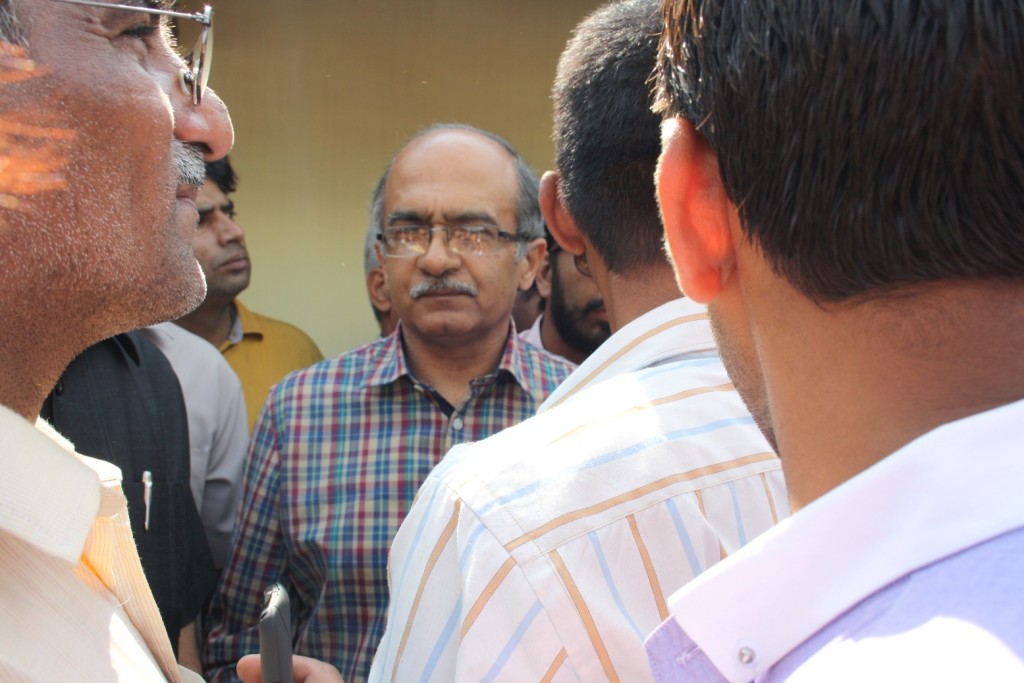 Besides, hoping to woo more volunteers, Yadav-Bhushan faction is apparently trying to preserve its presence in Delhi Assembly and the Lok Sabha.

According to Anti-Defection Law if Pushkar and Gandhi are expelled from the AAP they would continue to be independent legislators the way it happened in the case of Vinod Kumar Binny, the former MLA from Laxmi Nagar who was thrown out by the AAP.

In case Pushkar and Gandhi join a new party their membership will stand annulled.

For now, the breakaway faction has decided not to leave the party and struggle from within. It would wait for Kejriwal to act against Pushkar, Dharam Vir and others who either attended the Swaraj Sanwad or lent it support. It would demand reconvening of National Council, the highest decision-making body in the AAP, to deliberate again on the issue of ouster of Yogendra Yadav and Prashant Bhushan.

“We don’t have time to live and die for Kejriwal. We will do that for AAP. Let there be a National Council meeting again and 90 per cent volunteers will vote against him,”

a volunteer from Punjab told Point Blank 7 on the sides of day-long conclave in Gurgaon on April 14.

Davender Kumar, a transporter-turned-AAP volunteer, charged the coterie around Kejriwal with working against founding members of the party. 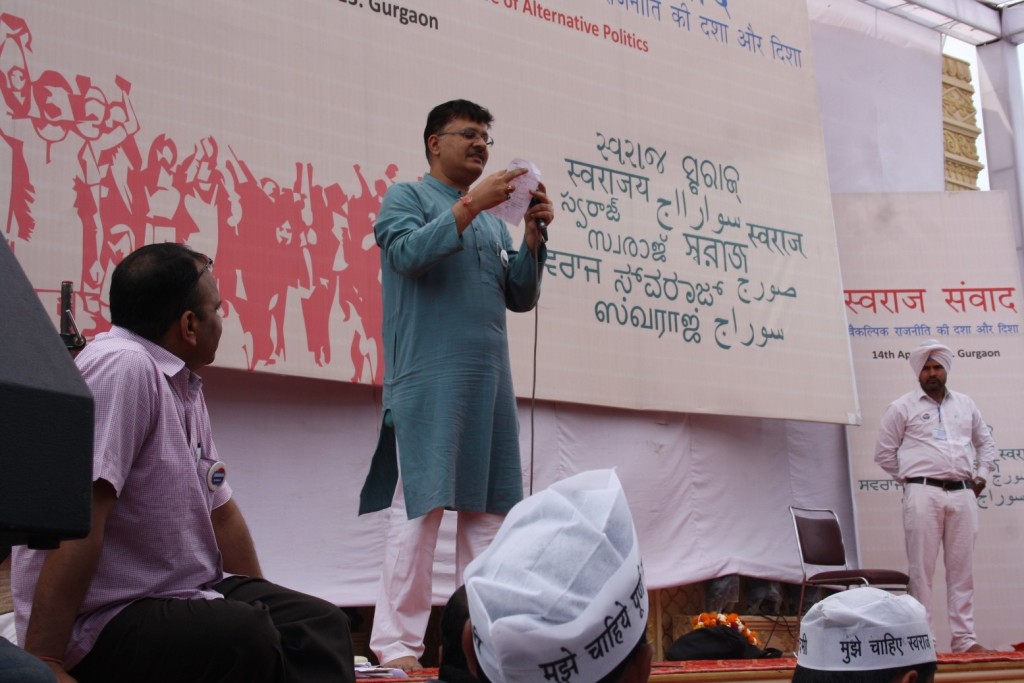 An activist from UP addressing the crowd | Photo: Narendra Kaushik

Revolt to fizzle out

Political experts look at the battle between Yadav-Bhushan and Kejriwal as a replication of what has happened in the Congress and the Bharatiya Janata Party in the past. They fear that the revolt of Yadav and Bhushan too would fizzle out the way various rebellions against Congress dynast late Indira Gandhi failed to work. They believe that the Indian politics has for long revolved around cult figures and India being a diverse country it is unlikely to accept a homogenous leadership. 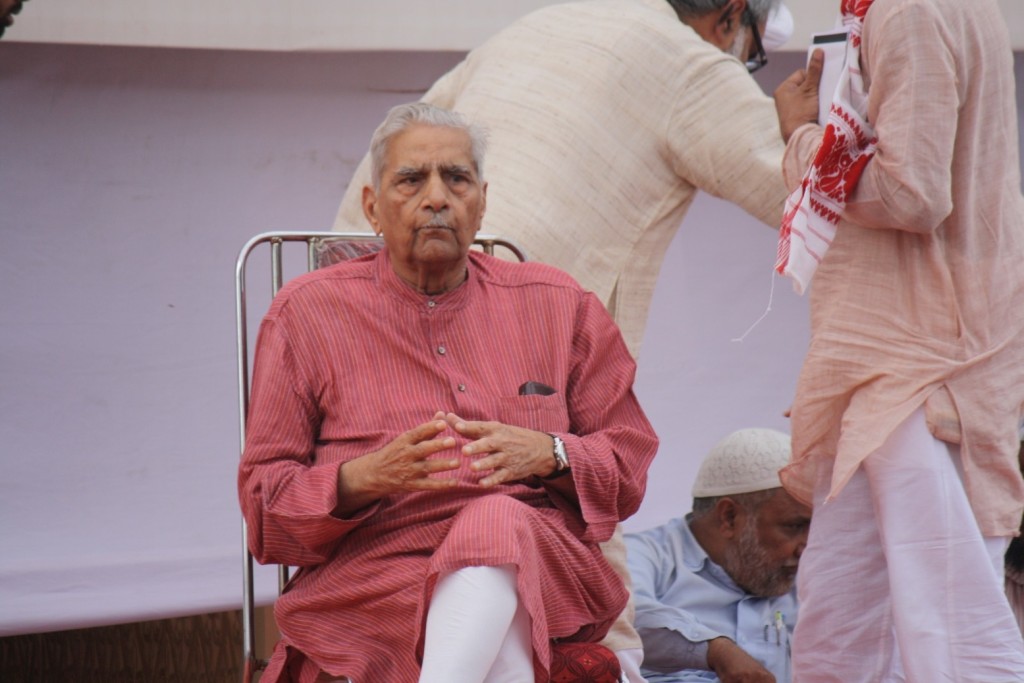 Even volunteers, who turned up for Swaraj Sanwad on the call of Yogendra Yadav and Prashant Bhushan, fear that the ideologue duo is no answer to Kejriwal’s mass appeal in Delhi.

“Not many people will come out to vote for them. This is a sad reality. We will have to live with it,”

a young volunteer said while on his way back from the conclave in an auto rickshaw. Four others nodded in agreement with him.

It is no secret that Yogendra Yadav and Prashant Bhushan wanted to use the Gurgaon conclave to launch a new party. The vote at the day-long conclave pours cold water on their plans and seems to suggest lack of confidence in their leadership.

Many of the AAP volunteers are not happy with the promotion of Sisodia, Sanajy Singh, Kumar Vishwas, Ashish Khaitan and Ashutosh by Kejriwal but they also have doubts whether Yogendra Yadav and Prashant Bhushan will match up to the Delhi Chief Minister and be torch bearers of alternate politics against him.