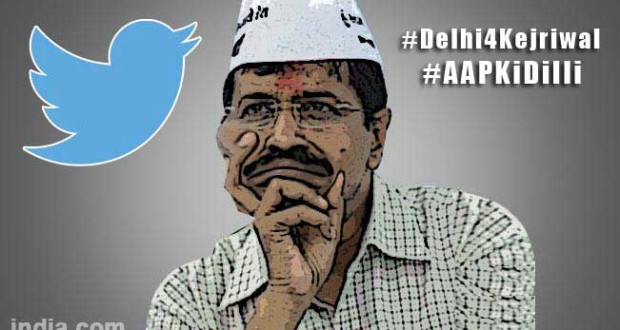 In less than two days Delhi will go into Assembly elections. Battle lines were clearly drawn more than a month ago and #Delhifightclub has been going at it and how.

Fighters Bharatiya Janata Party and Aam Admi Party were supposed to fight each other but through the course of the election campaigning it became #cabinetvsKejriwal just after they unleashed #KiranBedijoinsBJP. It seemed unfair that @arvindkejriwal face the full brunt of #BJP‘s scathing attacks all alone.

But #kejriwal need not fear.

Delhi elections have fallen during the #iloveTwitter age and the #AAPchief was able to incite unending, tireless and hormone-driven support from his #Aaptards who were there to rescue their ‘capped crusader’.

But wait, did we speak about the mud-slinging BJP and AAP traded all across Delhi? Just read it here: Negative campaigning gets aggressive as Delhi elections draw closer.

It’s not fair to give only #aamadmi the spotlight. Madam Bedi wanted to take Delhi by storm and was expected to attend 70 election rallies. She sadly contracted throat infection midway pleaded #voicerest and but managed to spew some complaints against Kejriwal.

But that doesn’t mean she was not a Twitter superstar. She aggressively pushed her #kiransblueprint and she does have a loyal support base who acknowledged it with retweets and made her trend for a while. It is highly unlikely that BJP was going to let the campaign rest solely on Bedi, BJP hoped to intimidate Kejriwal when they rolled in 120 MPs to pose five #Questionstokejriwal.

They plan on asking Kejriwal five questions everyday till 7th February. But almost everyday in the past two weeks AAP managed to be trending on the number one spot.

Whether it was the 5000 litres of alcohol allegedly found in AAP’s Uttam Nagar candidate Naresh Balyan godown or #hawalaatmidnight when AAP was accused of accepting Rs50 lakh donations from four different bogus accounts on midnight of April 5, 2014, AAP managed to be the Twitter superstar.

You have to keep up the Twitter trends and #AAPkimanifesto did just that. The junta loved it and tweeted in abandon. Campaigning time is almost over and most polls are in favour of #kejriwal4dilli and he might just emerge victorious but you can never say. Afterall, #AbkiBaarBediSarkaar could also happen.

PS: Check out some tweets under the hashtags mentioned in the article. We promise you an entertaining day.