What's Trending
Home > Rights > Life > Whose battle is it anyway? 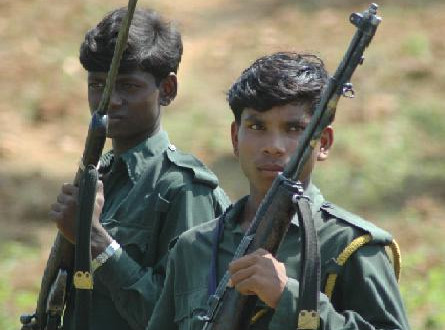 Whose battle is it anyway?

The women and children of the Indian tribal population are trapped in deadly crossfire between the state and the Maoists. Forget gender equality: sexual abuse is rampant.

Large sections of the Indian tribal population have borne the brunt of a bloody conflict that has lasted for years between the Indian state and the Maoists. This insurgency rarely ever comes to the fore on the global security agenda.

Both the Indian government and mining corporations have pursued exploitative policies to sate their appetites for vast reserves of forest and mineral wealth. In turn, the tribal population has been displaced into settlement camps under the banner of ‘development’.

The state-sponsored village militia Salwa Judum – a counter-insurgency operation against the Naxals – was responsible for eroding the already fragile situation, thereby helping the Maoists to secure a large support base within the tribal population.

The state’s lukewarm efforts to repair the cracks and fissures that exist in the realm of development and security have allowed the Maoists to hijack the cause of tribal rights.

Out of the 3000 child soldiers in India, 2500 alone are involved in the Maoist war and continue to be used as fresh battle fodder both by the state security forces and the Maoists. The Maoists have resorted to rampant recruitment of child soldiers into their cadres for covert operations.

Children have become easy targets because they can be easily terrorised and influenced. The child soldiers perform life-threatening tasks, from carrying dangerous explosives to being used as human shields. Despite ample evidence, the Indian government denied the involvement of child soldiers in the armed conflict in a 2011 report it submitted to the Convention on the Rights of the Child.

The Maoists have followed a policy of forcibly recruiting at least one child per family. Schools have been bombarded by them, often in a deliberate attempt to destroy the prevailing key state infrastructures. The occupation of schools by security forces for counter-insurgency operations is a serious violation of international law.

It has not only substantially increased the dropout rate in schools but is also responsible for creating various psychological disorders amongst children.

The increasing support base of women in the lower Maoist ranks has failed to secure the attention it deserves in the Indian security discourse.

Maoist support is in its declining phase since many men have lost their lives in the war against the Indian state. The Maoists who claim to restore tribal rights have earned further ‘social acceptability’ due to the increasing participation of women. 60 to 70 percent of the lower Maoist cadres now comprise of women who are employed to perform courier tasks.

While for many women, the movement might offer a path to freedom from the shackles of patriarchy and sexual abuse, the reality is not so pleasing. Gender equality has remained a second class category and has been subverted by the larger ideals of class equality championed by the movement.

The cases of sexual abuse faced by women both at the hands of Maoists and state security forces are rampant. Since the female body is often bound by the socio-cultural norms of ‘honour’ and ‘dignity’, women find it difficult to reintegrate into society after having been abused.

And the increasing number of female-headed households due to men losing their lives in the conflict is another impending and unaddressed challenge.

Women lack the necessary financial and social agency, rendering themselves largely unequipped to support their families.

In its current form, a peaceful resolution to this conflict remains a distant dream. If the Indian government is to win the support of the tribal population, it must start by adopting a two-pronged approach which improves the security situation and brings social and infrastructural development to the affected regions.

It is the responsibility of the international community to pressure the Indian government to take adequate measures before India’s marginalised lose this battle.

Previous: Dealing with social issues in a manner akin to a mother’s care
Next: Why I travel alone – The thoughts of a solo traveller