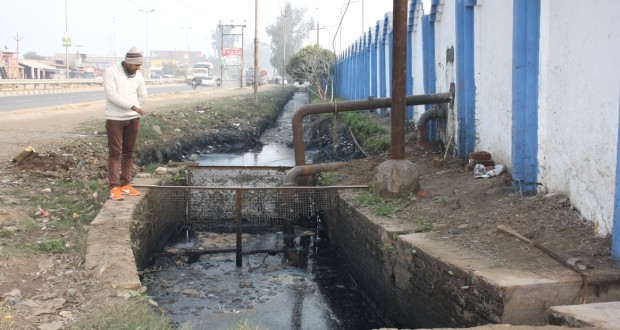 A drain on left of G T Road

Greater Noida: Sukhpal Singh (50) looks to have grown older by a decade in last two years since his wife Bala Devi (45) was diagnosed with breast cancer. The couple has been to almost every major hospital in Delhi and the National Capital Region (NCR) and is not yet sure whether Devi will be able to fight off the disease.

Singh is a farmer in Kheda Dharampura, a sprawling urbanised village in Bisrakh block of Gautama Buddh Nagar District about 30 kilometres from Delhi. The village is located on left of GT Road which runs from Delhi to Ghaziabad.

Singh says when he last asked Veena Gupta, a radiologist in Safdarjung Hospital, who is currently treating his wife, whether and when Devi will be cured, she merely told him,

Singh has sold off over five bighas of his land to pay for treatment of his wife. He has burnt close to Rs. 10 lakh on operation, chemotherapy, x-rays, ultra sounds and other tests and blood transfusion.

“One chemotherapy session costs Rs. 22,500. There are also costs of injections and blood platelets,”

he says with eyes welled up with tears. 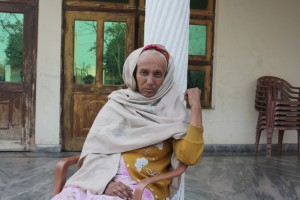 Bala Devi who has breast cancer

Devi has lost half of her weight (now 40 kg), breast and hair. Her breast was removed in an operation in a hospital in Dadri (a sub-division of Gautama Buddh Nagar District) one and a half year back.

“I lost hair on my head and even eyebrows and am growing them again,”

she informs pushing her veil back and displaying the white strands on her pate for camera.

Not Madan Lal’s. Lal, a farmer in her neighbourhood, has almost lost his voice to throat cancer in last one year.  Wounds in his mouth have made Lal incoherent.

Madan lal, who has throat cancer

Every time Lal blabbers something his son has to explain it. In last two months, he has sustained on liquid diets – warm milk, tea and water.

His cheeks and neck on either side have turned black due to the wounds. Lal has been treated at Rajiv Gandhi Cancer Institute & Research Centre in Rohini (North West Delhi) and All India Institute of Medical Sciences (AIIMS).

Lal and Devi and for that matter four others in their village who too suffer from cancer have no idea why cancer caught up with them.

Anil Mahavir, a member of Jai Ho Sewa Sankalp Ka, a social group working in the area, says 11 people have lost their lives to cancer in last five years in the village. This included Mahavir’s mother Savitri.

Dharampura is located in Chhapraula Industrial area in Bisrakh block of Gautama Buddh Nagar District. There are around ten other villages in the area including Chhapraula, Achheja, Dujana, Sadullapur, Bishnuli, Sadopur, Roja and Jalalpur.All of them have been affected by the spread of cancer. 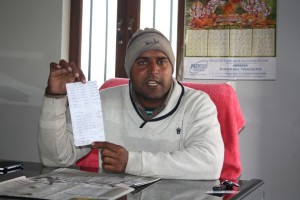 Mahavir puts death toll in the area at over 200 in last half a decade. Yogesh Nagar, an advocate and president of Jai Ho Sewa Sankalp Ka, blames spread of cancer in the region on contamination of water and has petitioned National Green Tribunal (NGT) for damages.

The petition alleges that there are 300 small and big industries in the area and none of them seems to be complying with the environmental norms.

The industries, it says,

“are discharging effluents either without treatment or disposing it off through reverse boring.”

There are chemical units, battery units, paper mills, an LED unit and a rice processing mill which are either discharging effluents in open drains or burying them in the ground through reverse boring.

Some of the units are not even connected to drains. When you visit to one such unit – Paramount Builtech Private Limited – you are told the unit discharges zero waste.

“We use water in making adhesive. There is no wastage,”

Jain feels the contamination is a result of kuccha pits built by villagers for their toilets, a charge hotly debated by Anil Mahavir.  The industrial units are also extracting ground water despite the Central Ground Water Authority having declared the Bisrakh Block ‘over exploited’ in 2011.

A direct consequence is that the water in the block is highly contaminated and water table has gone down considerably. 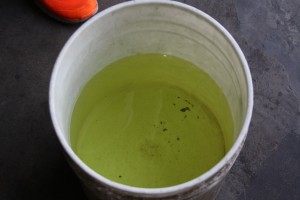 The contamination is so rampant that water pumped out even from over 120 feet under the soil is either greenish or yellowish and has all kinds of impurities dissolved in it.

According to Anil Mahavir, the hardness of the water is so high that the TDS stands above 3,000 at places.

Uttar Pradesh State Pollution Control Board (UPSCB), health officials in Gautama Buddh Nagar District, doctors from the AIIMS and many other public and private bodies have tested water samples in the area.They confirm hardness but deny that the contamination is causing cancer.

The health officials, in fact, claimed after a recent survey of the area that prevalence of the disease was below the national average (it was 39 per lakh population one less than the national average). Villagers and activists of Jai Ho Sankalp Sewa Ka rubbishes the survey.

Nagar claims about 50 people have died due to cancer in Dujana alone in last five years. According to him, there are eight others who are suffering from one or the other form of cancer.  He puts the number of deaths in Sadopur at 34 and seven others are afflicted by the disease.

There are men who suffer from brain, throat and prostate cancers. Among women, the prevalence of breast and uterus cancer is maximum. During a walk through the villages, you also come across people who complain of kidney, liver, hepatitis and skin diseases. Even the high mortality of cattle in the area is attributed to polluted drinking water. 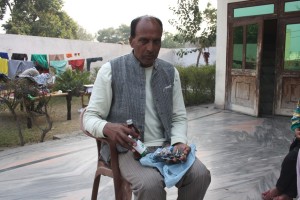 Sukhpal Singh says he had to go for artificial insemination for his cow in last three years because it failed to conceive. Mahavir lost his cow to stomach infection.

“We get electricity only for 14 hours. This is barely adequate for the RO to purify water for us. We can’t use the same water for mixing cow’s fodder,”

The prevalence of cancer has stigmatised the entire region. The land rates have become stagnant in last two years and there are instances of distress sale of plots by migrants who work in factories and live around the villages.

Anil Mahavir, who is also a real estate agent, regrets.

“People say there will be no marriage if they come out in open about their disease. The land rates have already gone down,”

says Harish Basoya, an activist of Jai Ho Sankalp Sewa Ka in Sadopur Village. Nagender Pradhan, head of Panchayat in the village, first plays down the incidents of disease and later blames it on radiation from mobile towers.

The contamination of water has led to mushrooming of water industry in the area. There are shops selling bottled water and mineral water in jugs.  Water plants have been installed on the periphery of the villages where water is relatively less contaminated.

Poor factory workers travel several kilometres to fetch water or pay through their nose to escape the disease.

“We spend over Rs. 600 on getting drinking water alone,” 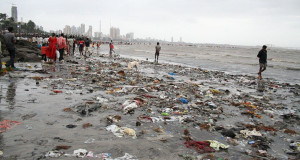 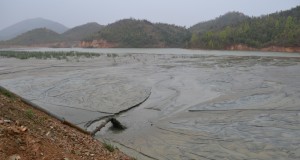