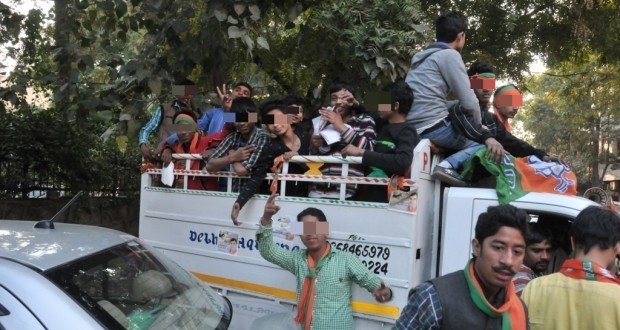 It was the last day of the political campaigning. Road shows and rallies galore, the National Capital was charged up and chaotic; scenes of traffic jams, processions, and policemen all over set the tone for the elections.

After all, what else do you expected to see two days before the Delhi elections? But what caught the attention of our young reporter was the presence of scores of children – aged between 10 and 15 years and some as young as five or six, packed into tempos. With his interest piqued, he asked them a few questions. Here is an account of what he discovered.

The implied political aptitude and conviction of these young participants impressed me at first. But I soon noticed bystanders taunting these children about the remuneration that they were receiving. It suddenly dawned on me that the children were not the future of any political party, but only hired hands to rake up the numbers.

I quickly realised that far from being overtly knowledgeable about politics, these children were clueless about they party they campaigned for and also current affairs in general.

As per the UN Convention on the rights of the child, ratified by India, the use of children in elections amounts to violation of their rights. Article 36 of the UN convention states that “children should be protected from all such activities which could harm their development”.

However, on asking around, I found that it was not at all unknown for political parties to hire children as young as eight from impoverished slums across the city to boost their numbers.

“I know that parties routinely hire young children from slums to stand at road shows and rallies to inflate their numbers. The story is the same be it Madanpur or Madangir,”

Later on at Khanpur, 15-year old Rocky explained to me that the practice is nothing new,

“The parties know that kids and even adults in the slums will do anything for money and they are right. Even though most people around support Aam Aadmi Party (AAP), they will readily join a BJP or a Congress rally if money or liquor is offered.”

After going around a few slums, it became evident that the practice is widespread. However, I tried to reason with myself thinking adults are also paid to be present in a rally just so that it seems to have a bigger turn out.

Taken by curiosity, I decided to visit a few more places and started with Jagdamba Camp in South Delhi. It was then that I realised, adults have little to lose, while most of these children lose out on their entire childhood. They attend political rallies without their parents’ knowledge, skip school and spend the money “earned” in buying tobacco and drugs.

Walking down the narrow convoluting lanes, I was immediately struck by how many children scampered about without any worry or supervision. I was also struck by the commonness of spotting children with glazy eyes and confused movements as if they were caught in some kind of daze. I got my answer soon enough when I saw a boy inhaling something through a crumpled rag.

Upon asking about the practice of paying children to attend political rallies, I was misunderstood as wanting to hire children. Instead of being shown out, I was asked how many children I wanted to hire by Afridi, a 14-year old boy, who immediately added that each person would cost Rs. 300.

After stating the purpose of my enquiry, I was given a thorough description of how political parties go about literally buying numbers – a tale that was recounted at the slums in Khanpur.

“Political parties typically send low-level party workers to scout any area for drunkards and derelicts who would facilitate the hiring of children in the area. They look for drunkards since they can easily be bought with the temptation of liquor,”

“The facilitator then gets a cut of the total sum handed over to him for getting the children. This is the first year I have worked as a facilitator since I just turned 14. Earlier I used to just go for the rallies and just get back some cash, now I can gather up to 100 people,”

As we sat speaking, we were surrounded by other children who all seemed to have something to add.

“For the really young kids, a rally is like a carnival. They need no incentive but once a child is about 10 or 11 years of age, they start charging money. Most children just spend it on addictions like beedis, cigarettes, ghutka and whitener but the party people are long gone by then.”

“Not that it would matter to them. Political parties all have the same dirty way of working with us – it is all about the paisa, nashaa aur pyaar (money, addictions and love).”

As chance would have it, Virat’s mother, passing by, spotted her son and promptly reprimanded him for not being in school.

“It’s been 10 days since you last went to school. All you want to do is roam the streets when you should be in class! Don’t think I don’t know. Have they removed you from school?”

Virat mumbled his response in conjunction with a shrug.

Just as I was getting ready to leave, some older children jumped into the conversation. They were dressed in loud and trendy clothes and all of them sported meticulously styled hair. It was their turn to speak now.

“During every upcoming election, touts from political parties come here and ask kids to join them from a few hundred rupees a day. They go around the city and do this in every area. They have already been here thrice,”

“They specify the number of people they want to hire from each locality and pay accordingly.”

As if on cue, Tiger quipped:

“My friends in Inderpuri tells me that they are being paid as much as Rs. 500 a day by BJP and at times they even provide them with girls. You can see the girls around India Gate.”

Before leaving I asked the crowd who hired the most this year and the answer was a unanimous and resounding “BJP!”

As I walked out of the slum, shaken at the moral bankruptcy of our political reality, I finally knew exactly what Afridi meant when he said paisa, nashaa aur pyaar.

(All names have been changed to protect the identity of minors)

Previous: Christian anger likely to be displayed on ballot in Delhi
Next: Cancer Spread in Greater Noida Villages 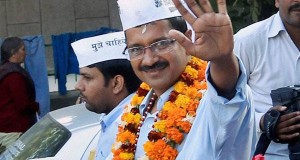