Legalization no panacea for prostitution

New Delhi: Lucky (50-plus) has no hope left. Ask her whether legalization of sex work will help her and other women of her ilk in the country, she nods in disagreement with her puckered face and sleepy eyes expressing no optimism.

A sex worker in one of the two dozen cement-peeled, seedy, smelly and slippery brothels on G B Road in New Delhi, Lucky has spent over three decades being an insider in sex trade.The only improvement she has witnessed over the years is that sex workers now have access to condoms, doctors and medicines.

They are still at a receiving end from traffickers, brothel owners, middlemen and law enforcement agencies. Vendors hawking their wares in brothels continue to overcharge them. Brothel owners and their managers grab the cash customers pay for them.

They are only paid pittance at the end of the month. At times, brothel owners simply shoo them off saying that entire earnings were exhausted in their upkeep and bribing the policemen.

They have no right to say no and no access to identity documents – aadhar card, bank passbooks etc – confiscated by their brothel owners. Brothel owners, called nayikas in colloquial terms, are either retired sex workers or their male kin.

Sometimes Lucky does not get a customer for weeks altogether. She looks unwell and fatigued. Her brothel owner stopped caring for her many years back. Lucky fears she may meet the fate of other half a dozen sex workers who were thrown on the road to die and whose last rites were performed by some charity organization in the past few years. Or like AIDS carriers, she may even forcibly be sent to her native place in West Bengal.

Babita, another old sex worker on G B Road, sees no respite for prostitutes after legalization.

“Police will always be there. It does not matter to them whether one has a license,”

Babita says walking through a corridor under the brothels.

Kanta, a nayika, cannot imagine visiting a nearby market for shopping.

“Legalization or no legalization, we will continue to be an embarrassment for normal people,”

she notes dismissing the debate over legalization.

A National Consultation discussed the issue threadbare on November 8 here under the aegis of a nine-member panel. The panel was set up by Supreme Court to revisit various provisions of ITPA, the short form of Immoral Traffic (Prevention) Act, 1956 which regulates the sex trade. Headed by Senior Supreme Court lawyer Pradip Ghosh, the panel also has among others National Commission for Women (NCW) Chairperson Lalitha Kumaramangalam on its rolls.

The NCW chief is of the view that legalization of the sex work will end trafficking and reduce the incidence of HIV and sexually transmitted diseases.

Kumaramangalam gets support from Bharati Dey, President of All India Network of Sex Workers (AINSW), an umbrella body of over seven dozen sex workers organizations in the country.

Dey, also a member of the panel, feels the legalization can put an end to harassment of sex workers at the hands of police, traffickers and brothel owner. Dey believes the move will decriminalize prostitution and weed out middlemen from the world’s oldest profession.

Many brothel owners and NGOs working for HIV+ are also for legalization. Their argument is that the step will reduce sex crimes in the country and give freedom to young sex workers.

“A Damocles sword hangs over the head of sex workers. They fear living and even dying. People are not even prepared to buy them coffins. Licensing will remove the uncertainty,”

Iqbal reasons that legalization will stop bandar baant (division of shares among middlemen, brothel owner and police) of money earned by the sex worker. He owns at least a couple of brothels on G B Road.

“Now people fear to visit red light districts. But once the trade gets legalized, they will have no fear. This will bring down incidences of rapes.”

In the absence of legal cover, there is no regulation for sex work. There is no stipulation how many clients a sex worker should serve in a single day. There are no holidays and vacations earmarked. There are no rates prescribed for sex.

But Ravi Kant, a SC lawyer and head of Shakti Vahini, an NGO working for HIV+ on G B Road, furiously opposes legalization proponents.

Kant who is also a member of the SC-appointed panel, claims legalization will open floodgates for trafficking and gang wars among organized criminals.

“It will create huge demand for sex workers and encourage trafficking of women to India from all neighbouring countries,”

Ranjana Kumari of the CSR argues that prostitution was not a legal trade under the norms of International Labour Organization (ILO) and thus did not warrant state protection. The ILO describes any such trade which is decent and not done under duress legal.

The women groups instead would want the government to remove ITPA provisions which put sex workers under a stigma. Section 8 of the ITPA, for instance, penalizes prostitutes for soliciting. This is what forces the prostitutes to stand behind nets in their balconies and woo customers.

Sex workers groups want amendment in Section 3.1 of the ITPA which forbids owners giving their houses on rent.

The anti-legalization lobby would want the government to work for rehabilitation of sex workers and their children, provide them alternate work and tweak laws like the ITPA to make life easier for them.

Tricks of the trade

A girl gets sold for as less as Rs 75,000. Most of the young sex workers have husbands for namesake. They frequently help these so-called husbands monetarily. The latter in turn provide them cover and respectability in native places.

“A sex worker often pretends to her family that she has a well paying job in Delhi. She even visits her family members with her so-called husband,” 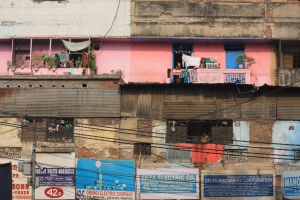 Sex workers hide their status from their children and educate them in boarding schools. Even when the children are settled, they prefer to visit them once in a while. The effort is not to let them visit brothels at any cost. There is only one grown up boy who lives with his mother on G B Road.

There are supposed to be five million sex workers in the country. There are red light districts in almost all major cities of Uttar Pradesh – Agra, Allahabad, Lucknow, Meerut, Kanpur, Balia and Varanasi. These districts are mostly located near or above crowded markets.

In Balia, for instance, the red light district is in a vegetable mandi. Besides Delhi, Mumbai, Kolkata and Pune have red light areas buzzing with sex workers and customers around the clock.

Apart from prostitutes, the country has large number of call girls serving clients in hotels and guest houses. There are also sex workers who operate from their residences.

The number of sex workers in Delhi can be guessed from the fact that State AIDS Control Society (SACS) in Delhi runs around five dozen projects for HIV+ people in partnership with public and private sectors. One project covers roughly 1,000 sex workers.

Some of these projects, however, target transgender, drug addicts, gay couples and MSM (Men having sex with men).

The ITPA has been amended around 16 times since independence. Manmohan Singh-led United Progressive Alliance (UPA) Government proposed to amend the act further to treat sex workers as ‘victims’ and their clients as ‘offenders’ prescribing jail term up to seven years for the latter.

No doubt, legalizing prostitution is a complex issue and there are provisions and core concerns which need to be addressed to formulate appropriate remedial or legal policies.

Previous: Inside India’s sterilisation camps
Next: Why land acquisition has become a tricky issue