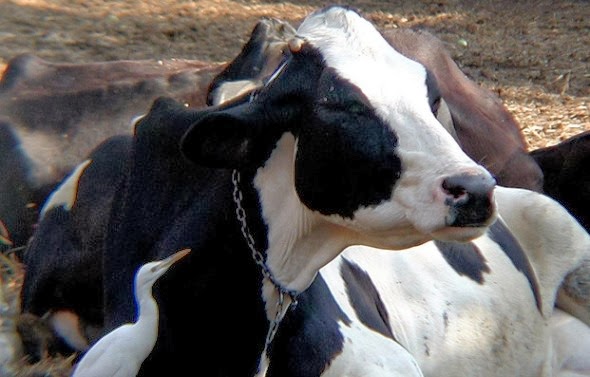 A vibrant network of small producers and milk co-operatives is threatened by free trade agreements and liberalized investment policies.
We take care of the cow and the cow takes care of us,’ says Marayal, a farmer in Thalavady, Tamil Nadu. Her two cows produce 6 to 10 litres of milk a day, which she sells for 30-40 cents per litre.

Across India, there are millions of backyard dairy farmers like Marayal. Each owning just one or two cows, these farmers supply millions more families and hundreds of thousands of informal milk parlours and tea stalls across India. These small unregistered operations prefer to buy milk directly from backyard dairy farmers, who supply fresh milk at the lowest price.

Seventy million rural households in India – well over half of the country’s total rural families – keep dairy animals. Over half of the milk they produce, mainly buffalo milk, goes to feed people in the communities they live in, while a quarter of it is processed locally into yoghurts, ghee (clarified butter) and other dairy products.

India’s dairy sector employs around 90 million people, of which 75 million are women. It is a significant source of income for small and marginal farmers, the landless poor and millions of rural families. And it is still India’s biggest agricultural sector, contributing 22 per cent of total agricultural GDP. The country is the world’s largest milk producer, accounting for over 15 per cent of the total global dairy output. Milk is an essential part of Indians’ diets. Almost all 108 million tonnes of dairy produced annually is consumed domestically.

Much is made of the significance of India’s dairy co-operatives in the ‘white revolution’ which saw a tripling of milk production between 1980 and 2006. But the real story lies with the people’s milk sector, which still accounts for 85 per cent of the national milk market. It was India’s small-scale farmers and domestic markets who were the real basis for the massive expansion in the country’s dairy production over those years, and, as a result, the benefits of this boom in production have been widely distributed.

Through the 1980s and early 1990s, the National Dairy Development Board implemented the second and third phases of a programme to increase milk production and consumption in the country. Operation Flood aimed to improve nutrition and reduce poverty by linking milk producers in Indian villages with urban markets. The programme’s success provided a steady income for farmers and even landless agriculture workers.

Corporate hands off the people’s milk

But India’s dairy sector has faced great challenges in recent years and the direction taken so far in negotiations over free trade agreements such as the India-EU FTA point to more difficulties ahead. With Western economies in crisis, India represents potentially rich pickings for powerful transnational corporations. The India-EU FTA essentially represents the demands of big corporations.

EUCOLAIT, the representative association of the European dairy trade and industry, is calling on EU negotiators to insist that the EU be given the same level of access to the Indian dairy market as India grants to other countries. In a December 2011 statement, EUCOLAIT highlighted India’s position as the world’s largest dairy consumer and said that India could become a consistent dairy importer. It says the EU should thus remain firm in negotiating an ambitious agreement delivering real market access for EU companies in the dairy sector.

Against this, there is strong domestic support in India for the government to take adequate steps to protect the interests of the country’s small dairy producers. On a parliamentary panel in April 2013, the members of parliament on the Committee of Agriculture stated that the interests of dairy producers in the country should be protected from monopolies and discriminatory and lopsided trade practices. There is also strong pressure from farmers’ movements to halt the India-EU FTA, which will create further liberalization in the country and destroy India’s agriculture sector, and the dairy sector in particular.

There is already a trend of increasing foreign investment in India’s dairy, especially following the decision of the Government of India in late 2012 to allow foreign retailers to own up to 51 per cent in multi-brand retail and 100 per cent in single brand retail. According to Kevin Bellamy from Rabobank, the world’s largest agribusiness lender, this is the first step towards introducing outside dairy products into the Indian dairy market.

The role of co-operatives in the Indian dairy sector

One of the district level co-operatives in Chamrajanagar receives 85,000 to 90,000 litres of milk a day from its 225 primary level co-operatives. The milk is collected twice a day from 60 bulk milk collection centres, on average one centre for every five villages, and then transported to the chilling centres in Chamrajanagar town. There are three giant chilling tanks in the district with a capacity of 30,000 litres each.

Farmers who sell the milk to the co-operatives receive payment of between 7 to 21 rupees per litre (11-34 cents), depending on the level of solid non fat (SNF) that is measured using lactometers available in each collection centre. The average level of SNF in milk that the co-operatives receive is 8.4 per cent. The milk is then packed into 1 to 2.5 litre packages for sale, under the Nandini brand. The Karnataka Milk Federation sells the milk to consumers for 32 Rs per litre (50 cents).

Karnataka produces a total of five million litres of milk annually, easily exceeding the state’s consumption of three million litres. The surplus is processed into powdered milk (skim milk powder and whole milk powder) by SKA Dairy Foods, a private company contracted by the government through a tender process. The co-operatives pay SKA 2.5 paese per kilogram of milk powder (100 paese = 1Rs). The co-operative in Chamrajanagar has huge storage with capacity of 85,000kg of milk powder. As the selling price of milk powder is 10 times the price of fresh milk, milk powder is an important product of the co-operative along with ghee. Part of the milk powder production is used by the Government of Karnataka for its school children food subsidies programme, which provides skim milk powder for children in grades 1-6 and whole milk powder to class 7-10. The remaining surplus is then sold to other states like Tamil Nadu, and even to Delhi. It is a major source of income for the state.

With its extensive coverage of villages in Karnataka, KMF is able to sustain income for small milk producers throughout the state. The co-operative system is not flawless. One of the most common problems is late payment to farmers. Producers are supposed to be paid each week, but one farmer near Rajarajeswar Nagar village said payments can be held up for more than a month. Financial transparency between various levels of the co-operatives and among members is also an issue. Only one representative from the lower levels of a co-operative participates at the level above.

The Karnataka co-operative and others have huge capacity to collect milk directly from farmers and bring it to market. Mega dairy farms, in contrast, have little interest in doing this. Instead, many big dairy companies seek to import powdered milk from Europe or New Zealand/Aotearoa to meet demand.

The co-operatives have also played a crucial role in resisting the India-EU FTA. Amul, a major dairy co-operative from the state of Gujarat, wrote letters to the Minister of Commerce expressing its strong opposition to granting any kind of advantage in terms of import duty on dairy products.

‘We don’t really intend to be dairy farmers, but it is part of our life,’ Marayal says. For farmers like her, cows and buffaloes provide a steady and sustainable income.

The vibrant network of small producers and milk co-operatives that makes up most of India’s dairy sector is a powerful model: one which is now threatened by free trade agreements and liberalized investment policies.

Opening up access to import heavily subsidized milk powder and other milk products from the European Union will allow processors and retailers to put downward pressure on local milk prices, forcing farmers to accept prices below the costs of production.

This is why India’s farmers, co-operatives and trade unions have been at the forefront of protesting against the EU-India free trade agreement over the past year. They understand that high tariffs are a necessity. Far from leading to higher prices for consumers, such tariffs will protect against dumping and prevent big processors from substituting cheap, processed dairy – or even non-dairy – products for real milk.

Investors and big dairy corporations are working hard to hijack dairy markets in India and across the South. In addition to its interests in India, Cargill is investing hundreds of millions in mega dairy farms in China. Fonterra is also expanding aggressively in China and Brazil. If they succeed, it would spell economic and social disaster for millions of people.

But experiences elsewhere show that people’s milk can successfully resist the powerful forces lined up against it. In Colombia, small producers, vendors and consumers formed an alliance that forced the government to recognise people’s milk – leche popular – as legal and essential. This success was built on three key arguments. First, that people’s milk presently meets the bulk of dairy needs and Big Dairy cannot replace it. Second, that millions of people’s livelihoods depend on small dairy production; here too, Big Dairy offers no alternative. And finally, that the system of people’s milk provides safe, fresh, nutritious milk at affordable prices to millions of households.

This is the system that needs to be defended as a cornerstone of food sovereignty in India, Colombia and elsewhere. Milk must remain in the hands of the people.

Previous: Repealing AFSPA – Is that the need of the hour?
Next: Pink pistols to see off rapists? Don’t make me laugh