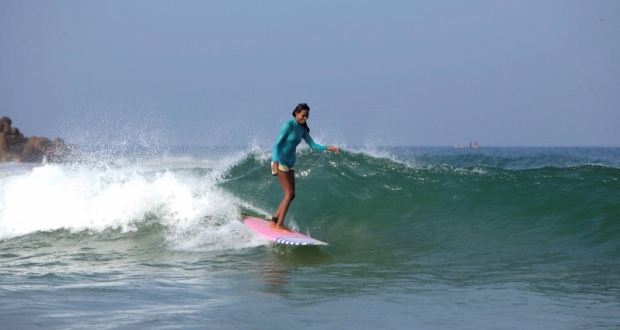 India is a country of 1.2 billion people and one that boasts of a 7,000 km of coastline, but ironically enough its beaches largely wear a deserted-look. But thanks to a motley group of native surfers, the country’s beach culture is changing for the good. A surf board is no more an alien thing on the palm-fringed beaches of India.

Seven years ago when Ishita Malaviya first set out to catch waves along with her partner Tushar Pathiyan off the west coast of Karnataka, the couple could count the number of native surfers on their finger tips.

As the popularity of the country’s virgin beaches start to swell among travelers and enthusiasts alike, India’s only professional female surfer has taken it on herself to make the country’s largely uncharted waters a surfer’s dream. 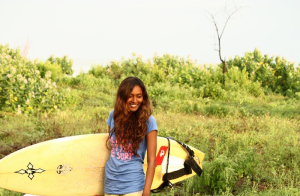 “I have a responsibility now to be a role model for the girls in my country so that they feel empowered enough to break free from social barriers and dare to chase their dreams.

I think surfing can be a very positive thing for India. For the girls who start surfing it’s opening their eyes to a whole new world,”

says the 24-year-old, who was also a finalist at the beach brand Roxy’s ‘Let the Sea Set You Free’ campaign last year.

Ishita, who aspires to represent India in international surfing competitions, is a member of 13-surfer team that was formed by Surfing Federation of India in 2011.

Most of these surfers, who began surfing in 2001, share a common goal – to make surfing an acknowledged sport in India.

While Indian streets and markets are teeming with people one rarely finds any crowded line-ups at the beach. So do Indians really share a harmonious relationship with the sea or do they dread venturing into water?

“Majority of the population does not know swimming leading to a high rate of deaths due to drowning, almost every year! Naturally, this has created a fear of the ocean in the minds of many,”

As people develop a bonding with the sea, they also become conscious of the environment.

“Earlier, none of them were even swimming. But now all the kids in the village surf with us. They’re conscious of the environment and even know how to rescue people from the sea,”

said Ishita, underlining that she always wanted to bring about social change through surfing. 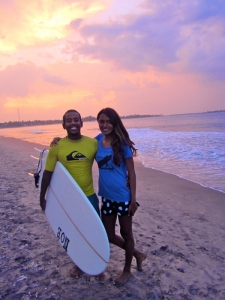 Ishita and Tushar – living their dream

Malaviya and Tushar were inducted into the surf lifestyle post their visit to the Surf Ashram in Karnataka, founded by American surfer Jack Hebner and run by a group of surfing devotees who have since come to be known as the “Surfing Swamis“.

“While growing up, I always dreamed about learning to surf, but just assumed that there were no waves in India and that I would have to travel abroad to start surfing.

When I came down to Manipal to pursue a course in journalism, in 2007, it was here that Tushar and I discovered an Ashram where the devotees, were surfers from California!

We were super excited to find out that they were surfing just an hour away from where we lived,”

When the duo asked if the Surfing Swamis would be willing to teach them, the Americans were excited to see that Indian locals were keen on learning to surf.

“It wasn’t long before we were catching our first wave!

I still remember the feeling of riding my first wave! I was smiling all the way to the shore and all the way back home from the beach! I knew I would be surfing for the rest of my life!”

But they couldn’t afford to stay at the ashram as the lessons cost them way too much.

“We made a deal with the surfers to bring groups of students from the university in exchange for a group discount. That’s where we came up with the idea of the Shaka Surf Club.”

Ishita had found her calling in surfing and decided to start the Shaka Surf Club along with her partner Tushar in 2007, to get more people in to the water and introduce them to the joy of surfing.

Currently, the duo offer surf lessons and educate travelers and the local villagers in Manipal on water safety  .

They have also opened Camp Namaloha, the first surf campsite in India.

The camp, which faces the river on one side and the sea on the other, offers a modest accommodation at the surf spot in the small fishing village of Kodi Bengre. 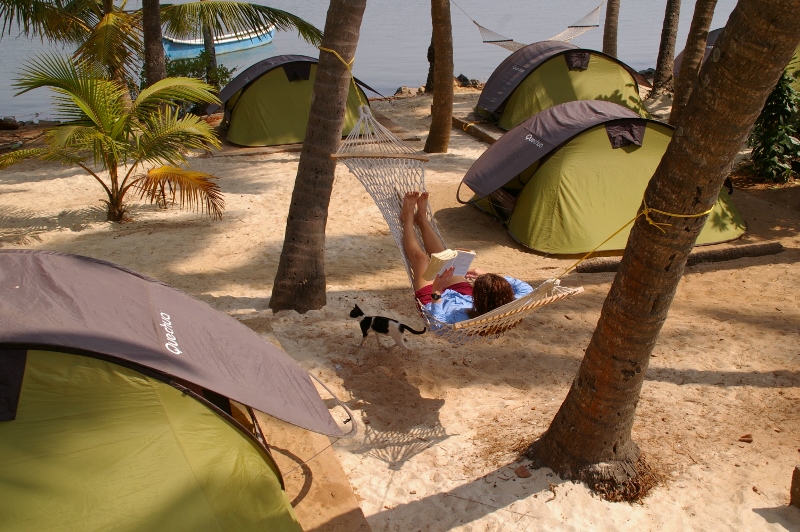 Since the school is located in a touristy area, the club along with volunteers from the village, prepare freshly cooked local food for students and guests.

Buoyed by their success in Manipal, the surf club plans to spread its wings to other states such as Kerala and Tamil Nadu.

These two states have huge potential to be developed as a surfer’s destination, Ishita underlined.

India has a very small surf community – just over a hundred surfers and surfing is still in its infancy in the country as there is practically no beach culture here.

“It’s such an exciting time to be a surfer in India; literally everybody knows everybody!

We’re a family of first generation surfers, who funnily enough have the joy of pushing our mums and dads into their very first waves!”

added Ishita, talking about the surf scene in India.

Marrying her passion to a social cause was always on Ishita’s mind.

“At our surf school, Tushar and I have taught many girls how to surf. Our regular crew includes three young surfer girls from the fishing village we surf in.”

The fact remains that surfing is pretty much unheard of in India and it will take some time for the sport itself to become popular in India.

While on one hand most of the live in fear of the ocean, on the other hand, there is also a lot of social pressure on women to look and dress a certain way.

Dark skin is not considered beautiful and hence most women are afraid of getting tanned.

“From my experience of surfing in the village, I have noticed that most parents do not allow their daughters to surf after they reach puberty because they are concerned about their attire in the water and want to limit their interaction with other boys in the community.

That being said, however, I think in the near future we will find that it will be the women from bigger cities, with open-minded families who will take to surfing and inspire the next generation of women surfers in the country. I have a lot of hope for the future of women’s surfing in India.”

Ishita, who has just returned from an epic four month long adventure in America where she got a chance to surf in California, New York and Hawaii believes that India too has some great surf spots. 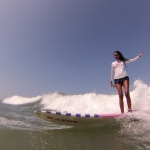 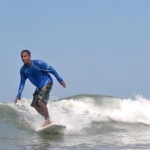 “We have everything from slow peelers for longboarders and beginners to barrels and point-breaks for advanced level surfers. We get waves all year round, except during the monsoon season (mid June to mid September),”

Ishita, has also travelled through the west coast of South India along with five other talented female surfers while shooting an all-female surfing documentary Beyond the Surface this April.

She feels honoured and immensely grateful to be a part of the project that aims to document the ways in which surfing, yoga and ecological creativity are bringing hope and fueling change for local people and the planet.

“This has been one of the most amazing experiences of my life ever. When I first started surfing, I had no other surfer girls to look up to and watch and learn from.

It’s always been my dream to meet and share waves with other female surfers in my country. Hence, this has been a real dream come true for me!”

said Ishita, who also has a keen interest in film making and learning how to shape surfboards.

Ishita now chases her dreams with the same vigor and passion as she charges into the waves, even if it means wiping-out and facing defeat every once in a while.

“Because I know there’s always going to be another wave coming.” 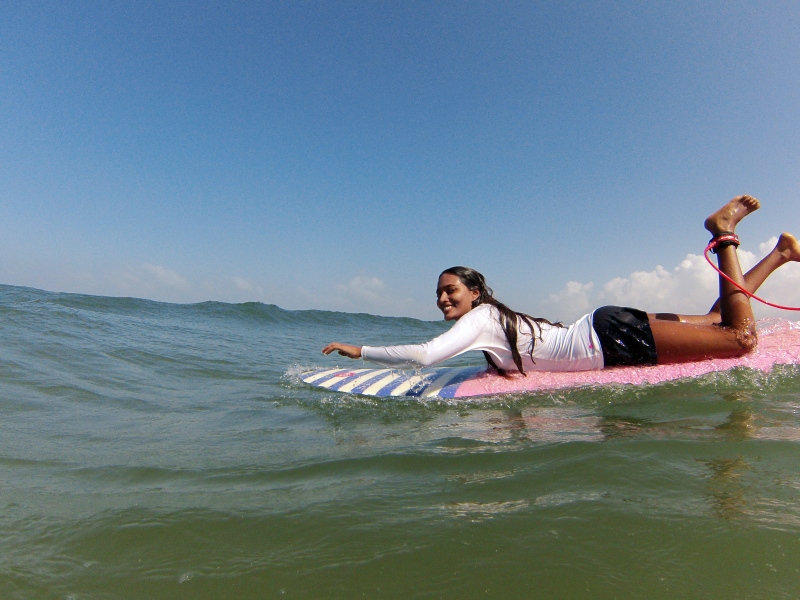