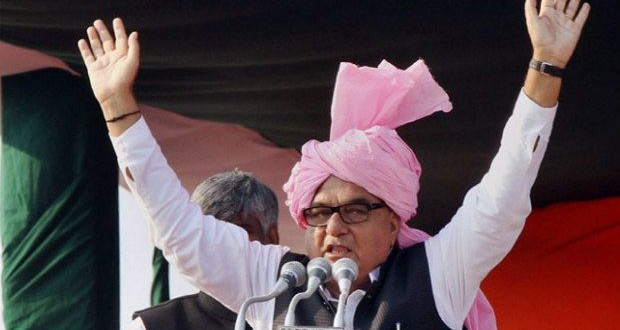 New Delhi: When Haryana CM Bhupinder Singh Hooda says he is keen to contest from Indri, an assembly constituency in Karnal District, in the upcoming Haryana polls, it is the clearest possible hint of his complete loss of confidence in the bigoted politics he has pursued during the last ten years of his rule.

Apparently, Hooda has realized his Rohtak-centric approach, which propped him into chief ministerial chair in 2009, may have reached a saturation point.

The 14 assembly constituencies of Rohtak, Sonepat and Jhajjar Districts, which gave him an advantage over Om Prakash Chautala’s Indian National Lok Dal (INLD) in the last assembly polls, may not fetch him any extra dividends this time around.

Hooda-led Congress pocketed 13 out of the 14 assembly seats in the heart of Jatland last time.

Rohtak, Jhajjar and Sonepat were part of the six districts (Faridabad, Hisar and Rewari were the others) where the Congress mopped up 24 out of 31 seats and established a lead over INLD.

Hooda, in fact, lost badly in majority of the districts of the State drawing a blank in Jind, Sirsa and Palwal and winning solitary seats in Karnal, Yamunanagar, Kaithal, Panipat and Mewat.

The Congress also lost in Fetahabad and Bhiwani. Out of the total 21 districts in the state, the party lost 10 and drew in five others.

If Hooda is rediscovering his ties with Karnal (he studied at Sainik School in Kunjpura – one of the five military schools in the country) and desires to be in the fray from Indri (he is currently an MLA from Kiloi assembly constituency in Rohtak), the reason is not far to seek.

This is also the reason why he laid foundation of Chaudhary Ranbir Singh University (named after his late father) in Jind last month and has approved setting up of Chaudhary Bansi Lal University in Bhiwani.

His attempt to set up a separate Sikh Gurudwara Prabandhak Committee (SGPC) for Haryana is also aimed at wooing Sikh electors in Ambala, Sirsa, Kaithal and Kurukshetra. Chautala has always reaped a rich harvest in partnership with Badals when it comes to Sikh voters.

Hooda’s detractors charge him with being biased against Northern, Southern, Eastern and Western parts of the state.

They accuse him of promoting a miniscule part of South Eastern Haryana (Rohtak and Jhajjar) at the expanse of 18 other districts including Gurgaon which generates maximum revenue for the state coffers.

Rao Inderjit Singh (currently a minister in Narendra Modi Government) left the Congress for the BJP last year for this reason.

During the last assembly elections, an opposition candidate in Bhiwani had engaged a private bus to transport people to and from Rohtak. He called the engagement part of his poll campaign.

His idea was that residents of Bhiwani and his prospective voters should see development in Rohtak and rue their own state of affairs.

Bhiwani, which figured among top districts of the state during rule of late Chaudhary Bansi Lal, is today in a shoddy state with roads, drainage and drinking water systems having remained in a time warp in the last 10 years.

While Rohtak has become a city of flyovers (half a dozen in place and another half a dozen in the pipeline) over the years, Bhiwani continues to sweat at railway crossings and in traffic snarls.

While Rohtak has come to acquire various institutes of excellence including Indian Institute of Management (IIM), Institutes of Hotel Management, Architecture, Rural & Urban Planning and Film making, Bhiwani makes do with the Board of School Education it got in the past.

The election campaigns of Hooda’s opponents within the Congress (Kumari Selja and Birender Singh) and outside will once again centre on neglect of various regions of the state at the expanse of Rohtak.

Selja, now a Rajya Sabha MP, has publicly blamed Hooda of overlooking Ambala, her parliamentary constituency in the past.

Singh, a former State Finance Minister, is unimpressed by the laying of foundation stone of Chaudhary Ranbir Singh University in Jind and has called it eyewash. He is on the verge of quitting the Congress.Rao Inderjit Singh is going to talk about disregard of Gurgaon and Rewari under Hooda regime.

Bharatiya Janata Party (BJP) President in fact is all set to sound the poll bugle from Mahendragarh in Southern Haryana in next few days. State BJP leaders will crisscross the state through four padyatras where the central theme will be regional bias in development and alleged favouritism and corruption of the Hooda Government.

What may work in Hooda’s favour is that his opponents are fragmented down the line and jostling among themselves to replace him.

The INLD will contest on its own and has already announced over 60 of its candidates.

The alliance of the BJP and Kuldeep Bishnoi’s Haryana Janhit Congress (HJC) has come under severe strain since the saffron party bagged seven of the state’s 10 Lok Sabha seats and lead in 54 of the 79 assembly constituencies it contested. The party had contested eight Lok Sabha seats leaving two seats for its partner HJC.

The BJP is in no mood to concede half of the assembly seats to the HJC as promised earlier. All indications are that the tie up may not survive till the elections.

The party has not invited Bishnoi in a rally Prime Minister Narendra Modi is slated to address in Kaithal on August 19.

In case the INLD, the HJC and the BJP contest separately (looks very likely for now) the state will witness a multi-cornered fight at the hustings.

Birender Singh, grandson of legendry Sir Chhotu Ram, is expected to join the BJP very soon.This will provide the party with a Jat leader of consequence. Jats account for over 25 per cent of electorate and out of the 20 State Chief Ministers 13 have come from this agrarian caste.

Haryana is likely to go to polls in October before Maharashtra, Jammu & Kashmir and Jharkhand. The current state assembly’s term is set to end on October 27.

In the 90-member assembly, the Congress had 41 seats while the INLD, BJP and HJC had 31, 4 and 6 members. Hooda engineered wholesale defections in the HJC to gain majority in the legislature.

The contours of the next legislature in the state will largely depend on how majority of over 25 million voters look at Hooda’s desperate bid to expand his thrust area of development.

Will they accept it? Or will it be a case of too little too late?