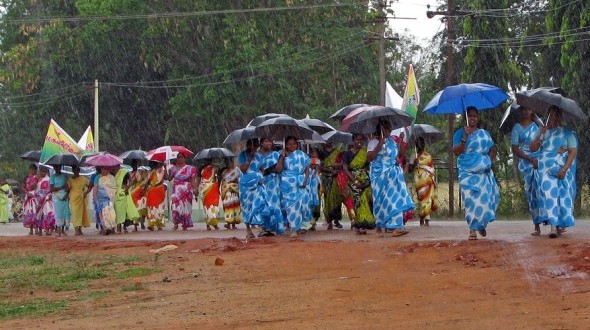 I grew up in the 1970s, in Calcutta – now Kolkata. I was bombarded with new ideas and alien concepts.

That meant being plunged from a conservative Catholic convent, and a practically Victorian society and mindset, to a world where I listened to Bob Dylan, the Beatles, Ravi Shankar, Pink Floyd, protest music and Karl Marx. Not necessarily in that order, of course. But mind-blowing, back then.

Communist schoolteachers explained that the UN was morally bankrupt for doing nothing against apartheid. And that the young Bengali middle-class university students then being systematically massacred by the police as Naxalites, were heroes fighting for justice for the poor.

They were battling a corrupt, feudal system, our commie teachers taught us. It was a bewildering time. But it forced us to question the status quo, as well as the opposition.

I understood the anger.

Yet I wondered how the murder of a poor policeman, leaving behind a penniless family, could achieve justice for the poor in general or anyone in particular.I remember the shocked silence in our little Sanskrit tutorial as our kind, gentle teacher recounted with sadness how her neighbour, a Bengali grandmother, distributed sweets when a police officer was brutally hacked to pieces in an adjoining lane. The old matriarch’s beloved grandson had been killed in a police ‘encounter’, Mrs Sengupta told us. The air, even in an average, lower-middle-class neighbourhood, was full of hatred and anger.

Many of us considered dropping out of university in the 1970s. It seemed as though the entire education system was futile and pointless, irrelevant to us and irrelevant to our times. It was a time of great confusion. There was political turmoil. The first Communist government was voted into power in West Bengal when I was in school. I remember the consternation in Christian circles at the advent of the first ‘godless’ government. Yet the Catholic intelligentsia, the Jesuit priests who sometimes taught us, pointed out that Liberation Theology found little dissonance between Communism and Christianity. Karl Marx got his ideas from the gospel, the more radical priests insisted. Christ was really the first Communist!

Whatever. It was an exciting time to grow up. There was always lively discussion. Debate about politics, religion, existentialism, the social order. The sexual revolution was a direct result of the stifling hypocritical society of the 1940s and 1950s. We debated hypocrisy and morality endlessly.

There are parallels in society today.

Often, when I hear young people talking, I feel a bit blasé. Been there, done that.

As a generation we took pride in being less consumerist. That’s a bit more difficult in these times of expensive smartphones and incessant new computers to be used and discarded practically every year.

I find fewer middle-class young people appear to care about injustice to adivasis or dalits. But then, they’ll join a gay rights march. Or a transgender protest. Or ‘like’ the Save the Tiger campaign online. I was impressed at the number of young folks who joined the anti-corruption movement in major Indian cities. They gave time and tweets.

They sat in protest, braving the blazing Delhi heat. So there is hope. Protests take different forms and every generation responds differently to the crises and issues of their time.

And yes, the fact that my first grandchild is due to arrive set me off into a contemplative reverie. What kind of a world are we living in, someone asked. And should one bring kids into a world like this?

I suppose the answer to that is that it’s an eternal question, posed by philosophers thousands of years ago. Angst is good. But Dylan didn’t invent ‘The times they are a changin’. He only wrote the lyrics. Life will go on. And hope springs eternal, no matter what.