Illegal Bangladeshi immigrants who take advantage of porous international borders to cross over and settle down in the bordering districts of West Bengal and Bihar, have now started penetrating deeper into the Indian territory.

Jharkhand’s Sahibganj district, which shares borders with West Bengal’s Malda, has become a case study into the systematic influx of illegal immigrants. Like the bordering districts of Bengal and Bihar, even here they have found political patronage from local leaders desperately looking for ways to create their never-eroding vote bank – never mind if that requires compromising the integrity of the country.

So how do they achieve the feat?

Simple, they help illegal immigrants procure all the necessary documents like passport, ration card and voter’s identification card to make them legal residents of India. Overwhelmed and overburdened by the leader’s favour, the illegal immigrant and his family return the favour by becoming loyal voters of the leader or the party concerned for generations.

As far as procuring crucial documents is concerned, it cannot be possible without the help of bribe-lusty officials who won’t hesitate to sell their motherland for some quick bucks.

About a year ago, the Jharkhand police had committed a blunder by granting passports to six illegal Bangladeshis in Sahibganj, a district that has become a safe haven for spill over anti-national elements over the past three decades.

The case of granting passports to illegal Bangladeshi nationals last June however, managed to stir a hornet’s nest in Jharkhand, forcing DGP Rajeev Kumar to suspend the officer in-charge of Radhanagar police station and issue an FIR against a village head, for “casually” vetting the critical identification process.

After the matter came to light on May 13 , during a normal DGP Aapke Dwar videoconferencing programme that included police top brass, passport officials and SPs or their representatives in 24 districts on pending character verification for passport issuance.

Point Blank 7 assigned its correspondent Sanjay Pandey, who co-incidentally belongs to Sahibganj, on the job to find out how it is a cakewalk for a Bangladeshi national to procure an Indian passport and what a legal Indian resident has to go through in his pursuit to procure the most crucial document of government of India.

As we started from Rajmahal, a picturesque town situated on the banks of Ganga, the landscape comprising of crumbling Mughal era-buildings running along the NH-34 gave way to lush green fields punctuated by clusters of huts here and there.

The kuccha-road slithering through the green swathes took us to a non-descript village where the six Bangladeshi nationals claimed to be living for generations.

As we entered the village, a group of men sitting on a machan (bamboo platform) under a mango tree looked at us suspiciously. However, once they were assured of our credentials through their sources at Rajmahal, the villagers opened up.

“None of the people who were given passports belonged to our village.

They are Bangladeshi nationals who took shelter in the neighboring Sahebtola village. Around 60% residents in our village are educated and many of them apply for passports to go to Singapore and Gulf countries in search of better jobs.

They deliberately used Hindu names to avoid suspicion of authorities.

It goes without saying the local administration works in tandem with the fake passport racket. In this case, Mukhiya Ganesh Kirtaniya and Radha Nagar OC played a major role. They made illegal immigrants legal and charged them handsome amount for the favour.

Kirtaniya charged Rs 40,000 from each applicant to vet their documents,”

said their leader on the condition of anonymity.

It is this easy for a Bangladeshi national to procure the most sensitive document of government of India. But this might not be the case if you are legal resident of the country.

Take my case. I had applied for a passport online.

On the available date I went to Ranchi and got my documents verified.

The problem started after the Passport Office sent my application to the Sahebganj police for verification. Usually, there are two agencies that are entrusted with the job – the local police and special branch officer, in order to do character as well as document verification of the applicant.

One fine morning, I got a call from one Mr B D Das, who introduced himself as the inspector of special branch, and asked me to come down to Rajmahal as he had a short deadline to file my report. I was on an assignment in Bangalore at that time, but I took the next train available and reached Rajmahal the next day.

I met the officer in the morning, and he asked me submit my ID proof, address proof, documents of name change and so on. I bought some time to arrange the documents, however, before I could submit the documents, I got a call from the officer that he had submitted my report mentioning ‘applicant not found at the address’.

When I confronted him about this and asked him to produce proof of whether he had actually sent the document to the SP’s office in Sahibganj, he mellowed down. It was around 3 PM when I reached his ramshackle quarter with all the required documents. I showed and got every document vetted by him.

But he said there was a difference of name in my application and matriculation certificate. I showed him the name change affidavit and gave him a copy to clear his doubts.

He then said that as he had to go to all the way to Sahibganj (35km from Rajmahal) only to submit my documents, I was required to pay him Rs 1000 for the favour.

When I refused to pay him bribe, he did not argue much because probably by then he must have already devised ways in his head to teach me a lesson for refusing to pay the bribe.

One burden off my shoulder, I headed to the local police station. But, the officer-in-charge Umesh Ram just would not show up. My pleas for a spot verification fell on deaf ears. I had to tag a local leader along just ensure that he listens to me.

Ram then instructed me to show my documents to Pankaj Hazari, his favourite chaukidar who doubled as the munshi of the thana. The chowkidar kept me waiting for almost two hours as he whiled away time chatting and smoking with fellow policemen at the station.

The long wait finally came to an end as I was called in along with two of my friends who had committed the sin of becoming my witnesses in the passport application.One of them had travelled all the way from Kolkata just to show his face at the police station.

After my documents were vetted by the semi-literate chowkidar, I asked him how long would take for a spot verification?

“You are talking about passport verification, it takes time. If you want to get it done fast, you will have to cough up Rs 1000.”

When I refused to pay him the bribe and said I would take up the matter with his seniors, he tried to sush me up by threatening to implicate me in a case under the SC/ST act.

Sensing troubling, I communicated the matter to DGP Rajeev Kumar though an SMS. The DGP called me back to know the matter in detail. The top cop assured me on phone that the chowkidar would be junked.

“If he filed a case against you under SC/ST act, he would be in jail,”

The same day, I sent a formal complaint to the DGP copying Rajmahal OC, DSP Rajmahal and Sahibganj SP in the same mail. Within two days, the elusive officer in-charge himself came to my house with his team to do spot verification.

He was more interested in mending fences with me than verifying documents.

Anyway, the verification was done, the officers shook hands with me and told me forget about the “bitter past” and claimed to have junked the chowkidar against whom I had complained.

He also underlined that the problem would not have occurred if I had introduced myself in the beginning.

With the verification process done and dusted, I happily came back to Kolkata to finish my next assignment. But little did I know that the ordeal wasn’t over yet. One fine morning, I got a call from a friend in the SP office that the Special branch officer had filed an adverse verification report, underlining that I had failed to produce documents of my name change.

I called up the special branch officer to check why he filed a negative report when I had produced all the documents.

Aware of the fact that I was being subjected to this torture because I did not pay him a bribe, I told the officer that I would take action against him. He retorted,

“You do whatever you want to do, I will also file a case against you for abusing an on-duty officer and put you behind bars.”

This time I was rattled, but I didn’t give up. I called up the special branch ADG Reji Dungdung and informed him about his officer’s deeds. Dungdug told me to file a formal complaint against him and promised to take action against him. 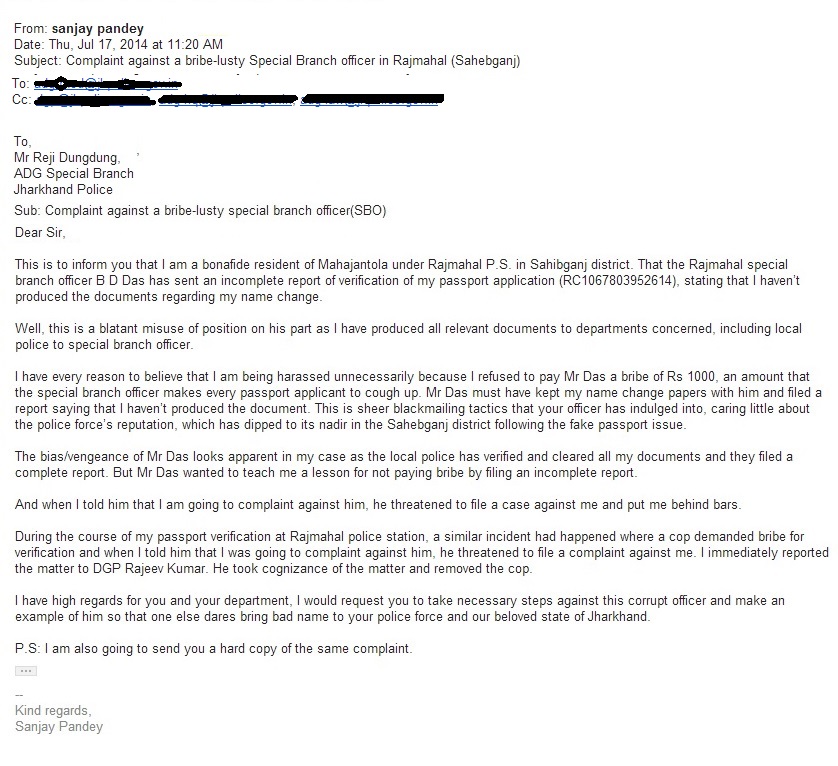 I called up the regional passport officer Sanatan Srivastav and apprised him of the situation. I reasoned with him about how the same documents that had been vetted by the passport office and the local police failed to pass the acid test of the special branch officer.

He asked me for my application number, my phone number and told me to wait for sometime as he would try and fix the matter.

Within 10 minutes, I got a call from Srivastav’s office confirming that they have overwritten the police verification report as they found no fault with my documents.

As soon as he hung up, I got an SMS confirmation from passport office that my passport was being printed.

Though I am assured that I would get my passport in a week or so, I am still skeptical whether the corrupt officer would be taken to task.

Some officials continue to take bribe with impunity even as the force’s reputation has reached its nadir in the district following the fake passport scam.

While I am happy that I managed to fight the system, and procure my passport, I feel sad about the common man who may not have connections or even the courage to take up the matter with the authorities concerned, and is bound to be subjected to harassment every time he applies for a passport.

Bangaldeshi nationals, however, need not worry as long as the politician-police nexus is intact in this region!