Ishant Sharma’s 7-74 somehow reminds me of the English sensation of the 1930s – Harold Larwood.

Being one of the finest fast bowlers of his time, Larwood’s career came to a premature end after inventing the style of bowling ‘bodyline’ against Bill Woodfull – Don Bradman’s Australia with resounding success more than 80 years ago.

Larwood’s strategy was considered an act of cowardice and had earned him a lot of flak, but the present day adjudicators dubbed Sharma’s performance as match-winning and the bowler was rewarded (with Man of the Match) aptly.

Mahandra Singh Dhoni and his boys were left with no option but to at least put up a brave face in England, particularly following a 0-4 drubbing when the Indians last toured there.

And when the situation boiled down to England needing 214 runs to win on the final day of the second Test at Lord’s, Sharma unleashed bouncers, one after another, and a totally inept England batting line-up fell prey, not even judging the merits of those short-pitched stuff.

Similar were the circumstances when Douglas Jardine’s Marylebone Cricket Club (MCC under the name of England) was determined to dent Australian supremacy.

Eventually, the Englishmen invented ‘bodyline or leg-theory’ (Larwood was the chief exponent) which didn’t go down well with the cricket fraternity and followed a bitter controversy.

Surprisingly, Larwood was made the scapegoat and Jardine spared. Perhaps the reason for the flare-up was Bradman’s aura vis-à-vis Larwood’s struggling stature.

While the two performances – in a gap of eight decades – should not be compared in totality, there is an analogy that can be drawn between the two eras in terms of nature and circumstances.

However,a few things need to be kept in mind. In those days batsmen were less protected. Hence Jardine-advised Larwood’s act was considered one of cowardice besides the fact that cricket has evolved much in the last eight decades and the refurbished form is much more than a game.

As far as similarities are concerned, there are quite a few to ponder on. 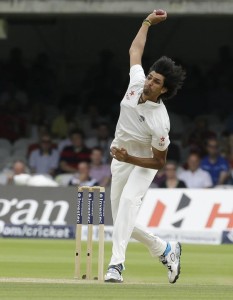 When the bodyline series took place in 1932-33, Larwood was a seven-year veteran in Test cricket after making his debut in 1926 and so is Sharma, who played his first Test against Bangladesh back in the summer of 2007.

Inconsistency is another aspect that brings both the players on the same platform.

Sharma hasn’t been able to do justice to his talent even after 57 Test matches. Even Larwood’s place in the MCC team wasn’t assured, given the poor show in earlier matches. His selection for the Australian tour raised many eyebrows in England.

Another co-incidence is both were initially reluctant and had to be convinced by their respective captains to go for the kill with specific bowling plans.

The differences between the two are also manifold.

First being the quality of the batsmen Larwood and Sharma endured. The time the English unleashed his lethal weapon there were Stan McCabe, Vic Richardson, Len Darling, and Bill Woodfull, besides the legendary Bradman to counter.

Aussies did their best, but still lost the Ashes 1-4.

While for Sharma, the success came against one of the weakest English batting line-ups in many years (perhaps of all time).

Captain Alastair Cook’s miserable form coupled with lack of application from seasoned Englishmen –Ian Bell and Matt Prior – actually helped Sharma more than he could do himself. But record books will say, Sharma helped India achieve the distinction of winning a Test at the hallowed turf of Lord’s – after 28 years – and take the 1-0 lead.

Now to take that forward, the biggest brain teaser for Dhoni is whether Sharma can continue his purple patch to help India win the Test series from here.

Eighty-one years ago, Larwood’s MCC side did that with much aplomb. Australia never had the luxury of analyzing video footages, whereas the current English side has all these options on a platter to make resurrection in the next three Tests.

However, one thing that stands out is the contradiction of judgments in the two eras of the same game.

The invention (bodyline or leg-theory) that earned Larwood vilification and shame brought Sharma the much-needed lifeline as well as his share of fame.

Previous: A town where you can buy a house for ₹ 20,000
Next: Maoists issue diktat to tribal schools to list child recruits