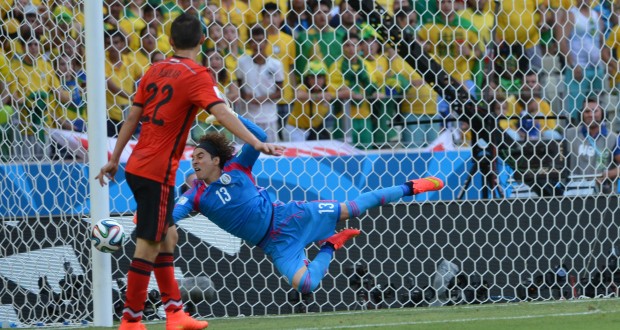 On the day of the keeper Ochoa | Photo: By Agência Brasil under CC-BY-3.0

Europe has a glorious history of producing great goalkeepers – be it Lev Yashin of the then Soviet Union or England’s Gordon Banks.The legacy continued through Peter Shilton (England), Dino Zoff (Italy), Oliver Khan and many others.

In the present day contest, Gianluigi Buffon (Italy), Manuel Neuer (France), Iker Casillase (Spain) are carrying the baton and are naturally expected to play a lead role in the  team’s success.

But the story of FIFA World Cup 2014 so far has been a tad different.

These big ticket entertainers failed to live up to their reputations. On the contrary, two lesser-known custodians from South America – Mexican Guillermo Ochoa and Claudio Bravo from Chile – have stolen the show, at least for the first phase.

Ochoa’s flashes of brilliance helped Mexico snatch point from hosts Brazil in a crucial group encounter while Bravo was instrumental in ensuring Iker Casillas-led Spain’s unceremonious exit from the tournament.

It would be incorrect to say that South American nations have not produced outstanding stoppers. Jose Luis Chilavert (Paraguay), Rogerio Ceni (Brazil), Rene Higuita (Colombia), Dida (Brazil) are a proof to that.

Twenty-eight-year-old Ochoa looked very calm in Mexico’s two matches against Cameroon and Brazil. Cameroon wasn’t a challenge for him as it was a one-way traffic, but in the second match, he stood between the five-time champions and three points.The battle wasn’t that easy. He had to deal with atleast seven tough attempts.Swerving long-rangers , volleys, headers all hurled at him in quick succession, but eventually he managed to keep his slate clean and deny Brazil the win.

said Ochoa, who doesn’t have a club to play for after his contract with Ligue 2 club AC Ajaccio expires in July 2014.

On the other hand, Chilean Bravo is not so unlucky. His brilliance against Australia (3-1 win) and Spain (2-0 win) not only helped Chile close in on second round berth but have been rewarded with a contract with one of world’s top outfits Barcelona FC, effective from July 1.

The Real Sociedad goalie, who has represented Chile in two World Cups and three Copa Americas, was signed during the summer transfer window.

Bravo’s sheet is not as clean as Ochoa’s as he consumed a goal against Australia. But in the second match, the 31-year-old goalie literally embarrassed his Spaniard counterpart and much-fancied Casillas.

The Chilean pulled off six deadly saves as compared to Casillas’ two, besides the costly mistake that led to a goal.

It still cannot be said whether any of these two custodians will be capable of creating a magic and cause upsets in the knockouts, but signs are ominous.

What if either Ochoa or Bravo does what Sergio Javier Goycochea of Argentina achieved 24 years ago?

In 1990, Goycochea wasn’t the first-choice goalie for Argentina, but replaced an injured Nery Pumpido in the second game of the group league against Soviet Union and then it was history. Besides having saved several goal-bound attempts, the unorthodox custodian made some astonishing saves in the penalties against Yugoslavia and Italy in quarters and semis respectively.

Argentina went close to winning the World Cup straight second time, but was defeated by Germany 0-1 in the final, also via a penalty which the diving Argentine goalie missed by a proverbial whisker. Will history be repeated? Let’s wait and watch!

Previous: Why is China trying to woo the new regime in Delhi?
Next: Raising a Dutch storm: Netherlands unstoppable 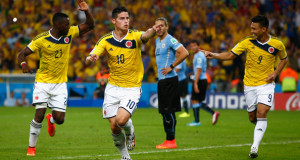 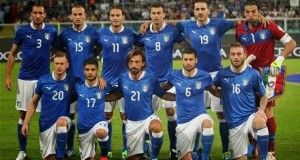