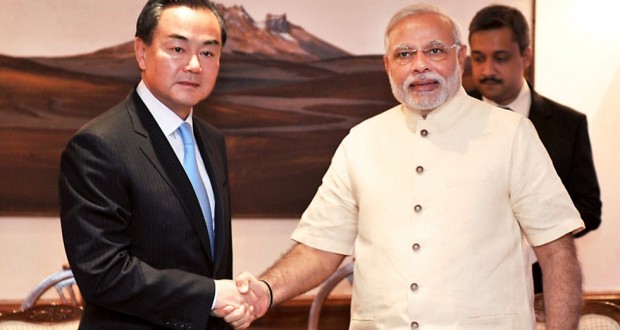 Why is China trying to woo the new regime in Delhi?

It is obvious that Beijing is going out of its way to keep New Delhi engaged.

Here are the possible reasons of why China is pursuing India despite its several decade old border dispute pending resolution.

A big reason is that Beijing’s ties with most of its neighbours in its Southeast are strained. It does not see eye to eye with Tokyo because the latter has refused to vacate Senakaku/Diaoyu islands in the East Sea. The two nations have had several run ins over the inhabited islands in the recent years. The dragon also has soured relations with The Philippines and Vietnam over the South China Sea.

China in fact claims about 90 per cent of the energy rich Sea, which besides Vietnam, Japan and The Philippines, is not in sync with what Malaysia, Brunei and Taiwan believe. Beijing has terminated all government-to-government contact with Tokyo over the dispute and Chinese patrol boats regularly confront Japanese craft in the disputed waters.

Beijing suspects that The Philippines and Japan have been emboldened to challenge it due to the overt and covert backing from America.

In an interesting development, Manila recently allowed the US to resume hosting military forces at the Subic Bay base first time in the last 20 years. China reportedly moved to occupy Mischief Reef which Manila claims after the US and The Philippines had terminated their base agreement.

Last month, the territorial dispute between Hanoi and Beijing spiralled out of control after which hundreds of Chinese factories were damaged and at least four Chinese nationals lost their lives in the anti-China riots in Vietnam.

China has been advocating for bilateral talks to resolve the disputes. Its adversaries, however, would prefer to involve countries like the USA into the resolution.

There have been attempts to unite ASEAN (Association of Southeast Asian Nations) on the issue. But the member nations have so far not succeeded in doing this for two reasons. First China uses its economic clout to keep the forum divided. Second, several member nations have territorial disputes with each other.

China would want India to stay neutral and not ally with its adversaries particularly Japan. This was the reason why Chinese leadership was the first to contact Indian Prime Minister Narendra Modi after his party secured majority in the Lok Sabha.

Chinese President Xi Jingping tried to seize the initiative when he sent his Foreign Minister Wang Yi to New Delhi. China would have preferred Modi to make Beijing his first stop in his foreign jaunts. It has not tired of reminding India that Chinese Premier Li Kiqiang paid his first visit to New Delhi immediately after taking over last year. Beijing would be keenly watching how Modi’s next month visit to Tokyo unfolds.

The strategic ‘rebalancing’ of US interests from Europe and Middle East towards East Asia, places India as the lynchpin. One proposal is that Obama should offload responsibility of challenging Chinese aggression in the region to countries like India and Japan.

Though India has embarked on a look east policy and is engaged in increasing trade and connectivity with countries like Myanmar and Thailand etc, it has till now not said yes to joining the American proposal.

Beijing wants New Delhi to stick to its non-aligned approach.

Apart from deploying its naval forces in the Asia Pacific, the US wants to strengthen people to people and trade connectivity with the countries in East Asia and around the Pacific Rim. For this America has signed Trans-Pacific Partnership (TPP) with Japan and Chile. South Korea, Indonesia and the Philippines are expected to join it later.  The agreement would facilitate American access to established markets like Tokyo, Seoul, Jakarta and Manila.

China feels access to huge Indian market can be its passport to prosperity and take its economy out of the blues. The Chinese economy has slowed down to a great extent in last few years with its FDI (Foreign Direct Investment) inflows registering a significant decline and manufacturing having contracted. In May this year, China attracted $ 8.6 billion in FDI, its lowest since January 2013.

In the first five months of the current year (January to May), the investment from Japan has declined by 42 per cent in comparison to the last year. International Monetary Fund (IMF) reportedly wants China to cut down its growth forecast for 2015 from 7.5 per cent to 7 per cent.

Beijing apparently is looking for a market which can bolster its manufacturing, consume its products and import its technology.It wants India to liberalize security considerations and allow its hydro-power companies to invest in the country.It is offering bullet train and other railway systems at a price which is much lower than what Japan has quoted.

It hopes New Delhi under a reform and economic development friendly Narendra Modi will give it an opportunity to increase the trade manifold.

The two countries hope to conclude their negotiations as members of the Regional comprehensive Economic Partnership by 2015 and take their trade beyond $ 100 billion dollar mark soon.

Previous: Smuggling of Tola Bars in Kolkata: Unearthing the truth
Next: Dawn of the new custodians: Bravo Ochoa!