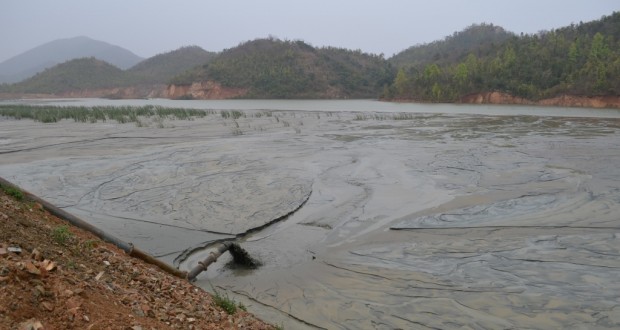 A tailing pond at Jadugoda; refuse material from the mines are pumped into the pond | Photo: Ashish Birulee

Jadugoda: India stormed into the Privy League of nuclear-powered countries three decades ago with a controlled explosion in Pokhran. But in the pursuit to collect raw material, to fuel its nuclear dreams, the government has ended up exposing around 50,000 people of Jadugoda, to radioactive pollution – a slow poison that kills over generations.

Jadugoda, a small township in Jharkhand, was once a lush green and serene locality, but things started changing drastically after Uranium Corporation of India Limited (UCIL) started operations here in 1967. 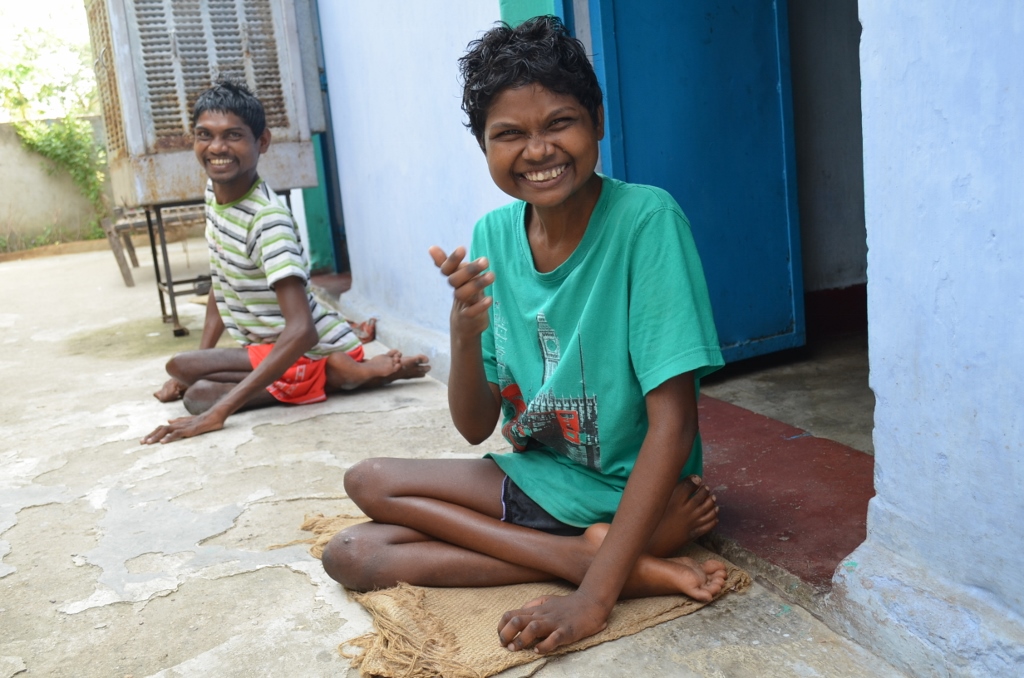 Most children in Jadugoda are born crippled | Photo: Ashish Birulee

People, mostly from tribal communities such as Santhals, Ho and Munda, suffer from radiation-caused diseases, including congenial deformity, sterility, spontaneous abortions and cancer. Yet , dangerously close to the villages, mining continues unabated sans any security measures . 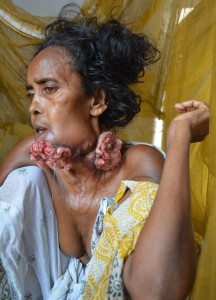 The lackadaisical attitude of the officials towards safe disposal of radioactive waste has also given birth to a social problem in the tribal heartland.

The Jadugoda girls who were married outside the village, are being treated as social outcasts now. Many of them, after giving birth to still born or crippled children, are being abandoned by their husbands .This has become a nagging social problem here.

Kavita Birulee (30) was thrown out of her in-laws’ house a few months ago after she suffered two spontaneous abortions. Like many other daughters from Jadugoda, who have been abandoned by their husbands, Kavita is now forced to live in isolation at her natal home.

“My husband abandoned me after I had two miscarriages. I was called a baanjh (sterile/infertile) and dragged out of my in-laws’ house. Uranium waste has literally ruined my life.

Most women face problems conceiving here. Spontaneous abortion is commonplace. Children are born with congenial deformities. As the impact of radiation grows unabated, more and more women will turn infertile.

This has made Jadugoda women a social outcast of sorts. People are hesitant to marry their sons to Jadugoda girls fearing that the girl might not be able to conceive, and even if she does, the baby might be abnormal. The government seems to have conveniently turned a blind eye to the issue,”

Ghanshyam Birulee, who runs a non-profit called JOAR that protests against radiation in Jadugoda, corroborates, 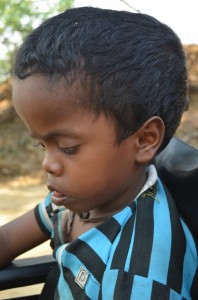 A child born with a congenial disorder | Photo: Ashish Birulee

“There were no problems in Jadugoda before mining started here.

The company recklessly dumped radioactive waste in and around the villages. Prolonged exposure to uranium radiations has caused several diseases. People are suffering from cancer, tuberculosis and skin diseases.

Besides, many women are unable to conceive here. Some give birth to stillborn babies while some deliver babies with congenial deformity. Hence the girls and boys born and brought up in Jadugoda are finding it difficult to find a match.

In the days to come, people from non-radiation affected areas will make us complete outcastes. Nobody will give their children’s hand in marriage to our sons and daughters.

Soon, we will socially cut off from the world outside. This is a catch 22 situation for us – we can neither hide nor go overboard on the issue.  We have to raise voice against this now. If we fail to do this, the coming generations would have to bear the brunt of our negligence.”

According to a survey report made by Sanghmitra Gadekar, a nuclear scientist,while congenital deformity was higher in the area, there were also increasing cases of spontaneous abortions and still-born babies in the area.

Speaking to Point Blank 7 on the gravity of the situation with regards to the health problems among women and children, Gadekar elaborated,

“The working condition of the labourers, who go inside the mines, is not very healthy. They are given only one uniform a week which they carry home with them. Their wives or daughters back home wash these uniforms in a contaminated pond, exposing themsleves to radiation. It is a vicious circle of radioactive pollution in Jadugoda.” 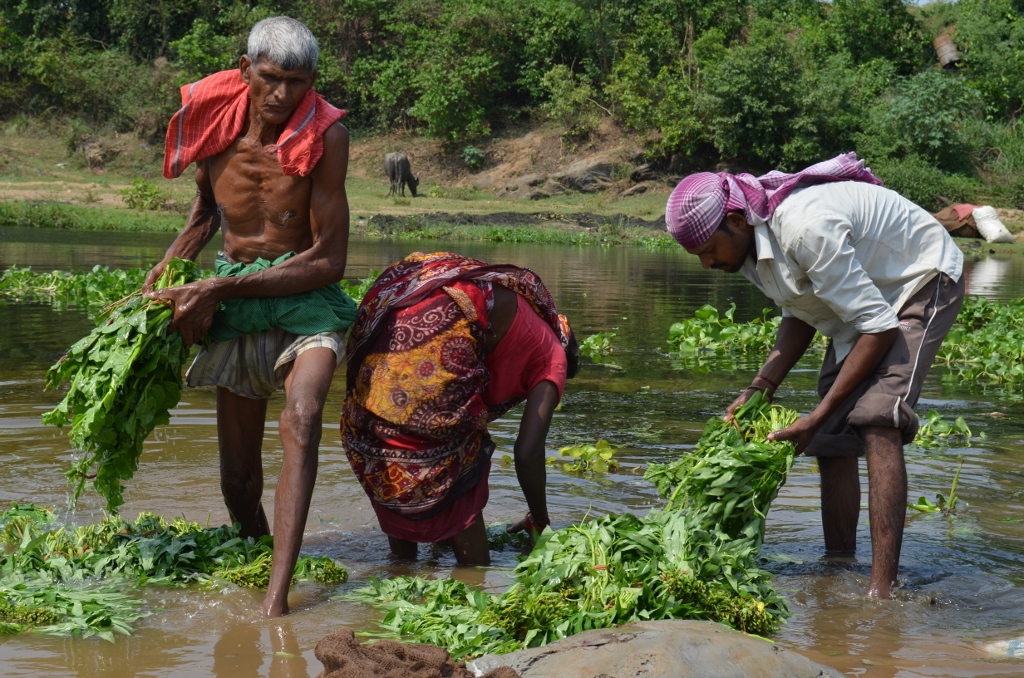 Leafy vegetables being washed in the Gurra river where Uranium waste is released. These vegetables are sold in local markets and even in places free from nuclear contamination. | Photo: Ashish Birulee

So what is the way to rid Jadugoda of radioactive radiations?

“In Jadugoda, the ore is of a very poor quality. So naturally there is a lot of burden. Hence, more soil has to be dug up and lifted. I don’t know how it works for UCIL to mine the ore profitably,”

UCIL’s corporate communications head Pinaki Roy, who has worked under different capacities for the past three decades, also agrees that Uranium ore found in Jadugoda is of low grade. He, however, ruled out the possibility of radiation there. Clarifying further, he said,

“Uranium per se is radioactive. But one must also consider the grade of Uranium or its quantity in ore. Unfortunately in India, we have low grade ore as compared to countries like Canada, Australia and Kazakhstan. But we have to make do with whatever we have.

We are mining and processing Uranium, to overcome the power shortage through nuclear means, for our future generation. The Alfa ray is very low, the levels of radiation is very very low.

In spite of that, all possible precautions are taken for radiations. There will radiation in the mines but more than radiation it is actually the daughter products that come out as gas that are harmful. Underground mines go down at least for 1 km(one of our deepest mines). and the people underground, are not supposed to consume any food. That way all the possible precautions are taken. So I personally would not attribute to any of such sensational stories that come out in the media to UCIL.”

Though UCIL officials claim to provide safety gears to workers, a candid chitchat with labourers taking a tea break in between work revealed that the firm pays very little attention to safety gears.

“There have been several problems. Everybody suffers from gastric problems here. We know the hazards of working in a Uranium mine. But we are labourers. If we don’t work, what will we eat? Safety issues are not taken seriously.

The company has given gumboots to many of our peers, but many of them do not care to wear them. Also, there is no proper monitoring of safety measures. They only time the company becomes serious about safety concerns is during the Safety week,”

said 34-year-old Sapan, who has been working in UCIL as a helper for the past 4 years.

Though the workers are aware of safety and health hazards of the UCIL mines, they don’t hesitate to risk their lives to earn a living.

On asking why do they choose to take up such a dangerous job knowingly? Pat comes the reply with some nagging questions,

“Which one is more dangerous – death due to starvation or death due to illness? Disease will kill us slowly but how many days can you survive without food. If we don’t work in these mines, what option do we have?

We cannot go to other places searching for a job, leaving our wives and kids behind. There are jobs in cities but the cost of living is so high that we will not be able to save a single penny. Hence, whatever little money we get, we try to make ends meet right here. It would have been better if the company had done something to ensure our safety.”

There is no denying that from air, to water, to earth and to plants; in Jadugoda, radiation is omnipresent. 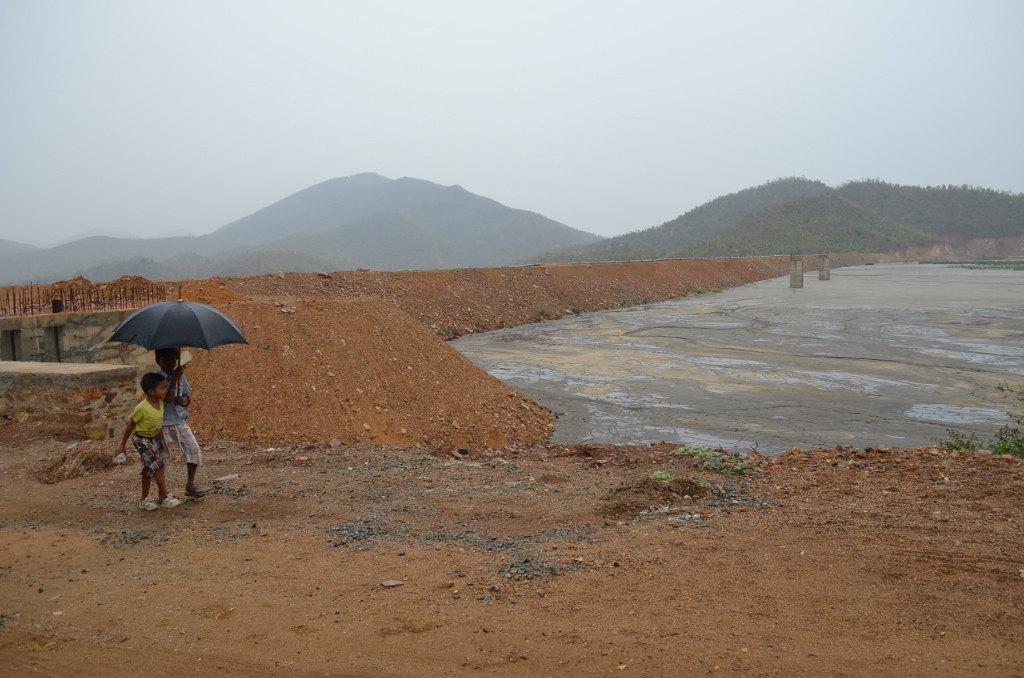 So much that even the drivers and cleaners of trucks ferrying Uranium wastes to the dump yard, who literally eat and sleep amongst the Uranium waste are the most prone to radiation. 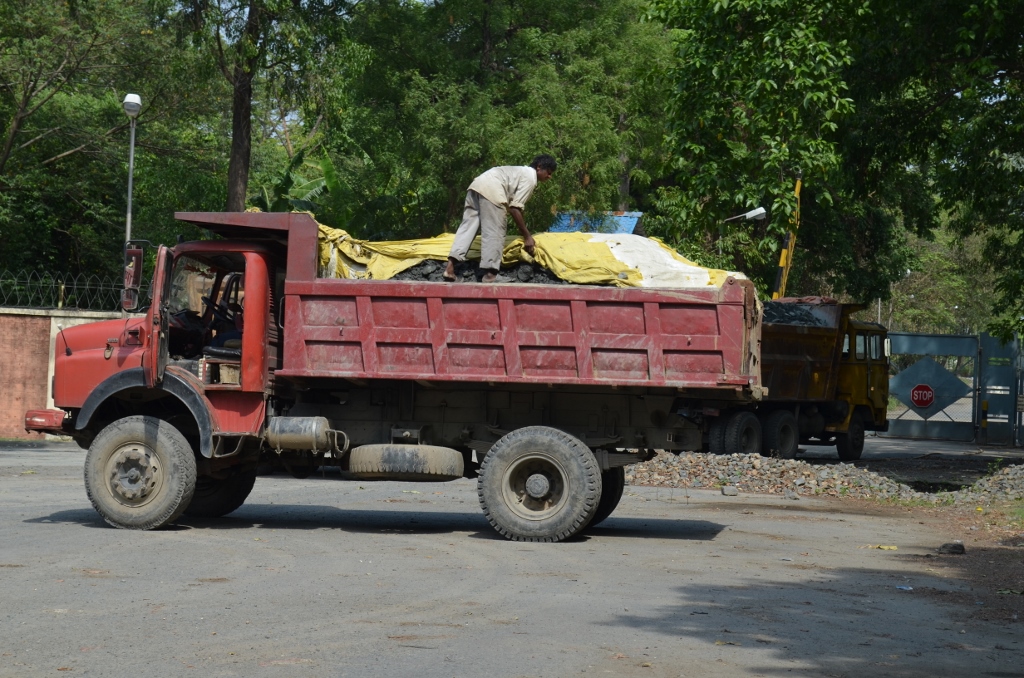 Point Blank 7 tried to talk to a few drivers waiting to refuel their waste-laden trucks at a petrol pump in the town, but they were reluctant to talk against radioactive pollution caused by UCIL.

“We cannot say anything about it. We don’t know a thing about radiation. If you really want to know about it, go talk to UCIL officials. We are not regular workers here, so radiation is not going to affect us. Everybody, including workers and general public, know that it is a sweet poison. But if we raise our voice against UCIL, we will end up losing our job. Who will give us employment then? We cannot say anything against the company. We know nothing about radiation here. We see reports in the media only,”

said one of the drivers, requesting anonymity.

While the media has been covering health problems caused by radiations  in and around Jadugoda only, but anti-nuclear pollution activist Xavier Dias raises an alarm against the dangers of radiation in Jamshedpur as well, a place just 4km (ariel distance) from the radiation-emitting Uranium mines in Jadugoda.

It has been about 30-40 years of consequent mining in Jadugoda and people there are suffering. Their illnesses are unexplainable. The whole Jadugoda story has had a lot of coverage on the social and medical impact of Uranium mining. However,

“What is not getting coverage is that these mines are the only mines in the world built within human habitat.

All around the world – in Australia, Canada and all – even in Nigeria and African countries, the mines are way out – 100km, 50km. Workers commute there and come back.

The worst thing about Jadugoda is not only that the mines are built within the Adivasi habitat, but the mines are also bang on the borders of the city of Jamshedpur.

In fact, India’s first open cast Uranium mines, which is much more dangerous from radiation point of view, is Baduranga. It has been built about 4km from the centre of Jamshedpur.

It is my understanding those living in Jadugoda are already radiated and nothing can be done about it. Once you absorb the particles they remain in your body.

Now, Jamshedpur is being affected and nobody is talking about it.

Previous: Changing Regimes: Raising Hopes of Peace in Kashmir ?
Next: Why remember the past? The case of Tiananmen