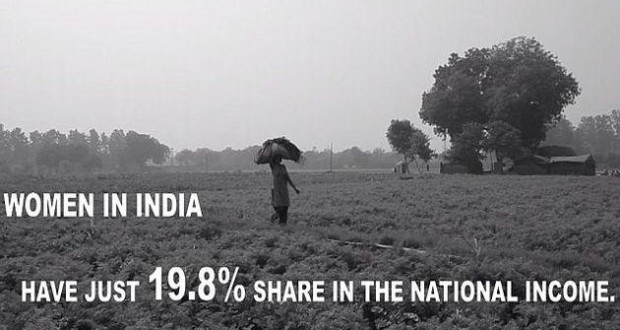 Photo: From the documentary "Invisible Hands" by Pramod Dev

Time To Narrow The Gender Chasm in National Income Accounting

I read about Adam Smith and his iconic metaphor of the “invisible hand” for the first time as a teenager in the late ’90s. The “invisible hand” refers to the self-regulating mechanism of the market, where individuals driven by their own private interests, unwittingly benefit society at large.

The metaphor caught my fancy even in those early days, not because of my devotion to the free market (I’m more of a Keynes afficionado), but because it so aptly captured an issue close to my heart – the role of women in the home and in society at large.

Just think about it for a minute – a woman’s labours and the products of her work in the domestic domain are largely “invisible“ to her family and community; there is no tangible measure of her efforts, no recognition for her toils, and certainly no reward for excellence. Yet without her contributions, life as we know it, both within our homes and beyond them, would cease to exist.

Unfortunately, this “invisibility” of unpaid domestic work isn’t just a social construct, it’s an economic one – one that is institutionalized in conventional National Income Accounting doctrine.

SNA creators believe that including these services will diminish the usefulness of national income accounts, that such services are difficult to value, and that they do not have much impact on the economy.

However, the fact is that none of these rationalizations stand up to scrutiny.

The core SNA argument in plain words is essentially this –

“We know you work and create value, but since you aren’t paid for it, its more convenient for us if you didn’t exist. Acknowledging your existence would upset the neat little model we’ve created that includes folks who do infact get paid for their efforts. So, tough luck.”

Sounds unfair, doesn’t it? But lets forget about moral rectitude for the moment, and simply test the logical consistency of this argument.

The argument implies that domestic services that are not paid for, must be treated as “non-economic”.

The reason this does not make sense is because a market for domestic services does indeed exist, and the value of such services can be estimated, albeit with some effort and creativity.

Infact, in times of strong economic growth when households have more disposable income, domestic chores traditionally done by women in their homes for free, move to the market and are performed by paid domestic workers. When this happens, the national product increases, not because new services are being produced, but simply because services that weren’t being counted in GDP before, now are.

This inconsistency overstates the value of the national product in times of economic expansion, and understates it in times of recession when women tend to take up more domestic responsibilities.

Moreover, beyond the realm of pure logic, the SNA argument represents devastating socio-politico-economic consequences for women worldwide, who especially in developing countries, perform close to 90% of unpaid domestic services.

If the efforts of these women toiling away in their homes, providing services critical for the survival, health and well-being of the earning members and dependents in their families are not accounted for,

These are the type of questions that need to be asked and answered.

A number of economists for their part, have been asking these questions and have done important work on the valuation of unpaid services. Time use surveys that report data on how people spend their time between various activities during a given time period are critical tools in estimating the value of unpaid work.

UN data shows that close to 60 countries (including India) have undertaken time use surveys from 1990-2013. Adjusted wage rates can be applied to such data in order to value the time spent on unpaid work. While there are conceptual, coverage and standardisation issues that need be ironed out, many studies using such data and methodology have been successfully completed.

For instance, a study conducted by Andrew Webster (Australian Bureau of Statistics) valued total unpaid work in Australia in the year 1992 at 58% of GDP.

In the Philippines, for the period 1990-1998, a study conducted by the country’s National Statistical Coordination Board (NSCB) estimated the value of unpaid domestic services at 27-40% of GDP.

In India, Prof. Indira Hirway, Director of Economics at the Centre for Development Alternatives (Ahmedabad) has done important work in this field. In a pilot study using time use data, she estimated the value of non-SNA activities (not included in the UN’s system of national accounts) for the state of Gujarat at ~30% of the state’s GDP.

Granted that the redefinition of national product involves questions of consistency and nuances much beyond the scope of this article and that their resolution will require resources and creativity. However,

The primal question is this – can we by any measure of intellectual, moral or social integrity justify ignoring over a quarter of our national product, the core of our families, and the unsung heroes of society? Will we ignore women?

The answer should be a resounding “No”.

A short documentary – “The Invisible Hands… that build India” directed by Pramod Dev, a researcher and an experienced visual media professional asks the pertinent questions highlighting the situation in India and tells us why it’s time to make the real invisible hands visible…

As our nation struggles to give its women the freedom, respect and opportunities they deserve, let us take this critical first step of counting women on paper, before we attempt to achieve anything more tangible.