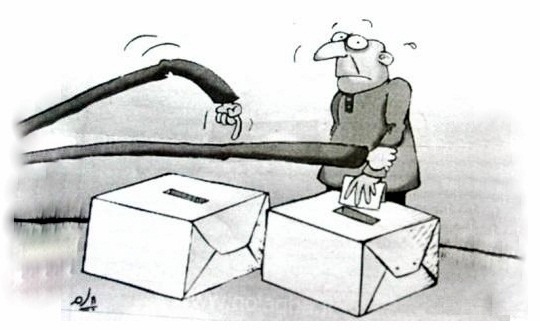 Nadia: Mita Roy, 50, was looking forward to exercising her franchise for the first time ever at least this year. But just like the past four decades, she was robbed of the basic right once again when cadres of the ruling party (this time the TMC) allegedly barged into her house and forcefully took away all her identification proofs, taking the Left Front’s “scientific rigging” to a new nadir.

Like Mita most of the 30,000 voters of Gayeshpur municipality under the Bongaon Lok Sabha constituency have never been allowed to exercise their franchise since CPM’s coronation in the late 1970’s.

“In the last elections, CPM guys threatened us with dire consequences if we stepped out of our houses to vote as they feared we might vote them out of power. This time, the cadres of Sharada scam-scarred TMC took away our cards fearing that we might vote for CPM. The modus operandi of both the parties has a striking resemblance. Both TMC and CPM believe in the politics of vendetta and have little tolerance for one another. They are like political twins with the same DNA but different skin colour,”

According to political observers, since about four decades people supporting the opposition parties haven’t been able to exercise their franchise in different parts of Bengal, thanks to the Left Front’s infamous “scientific rigging”.

So what does “scientific rigging” mean in political parlance?

“Scientific rigging is basically a strategy to block out voters of opposition parties. This is a painfully time-consuming process that starts with the preparation of the electoral roll. The parties prepare an exclusionist list months before the elections where they put together names of people who are unlikely to vote for them,”

Once the list is prepared, the cadres of different political parties are assigned the job of identifying the houses of these rival voters and instilling fear amongst them. As the election date inches closer, the intensity and gravity of threats increase and those who dare to defy them are subjected to verbal and physical abuse and their families are also harassed.

Days before Birbhum went to poll on April 30, a group of bike-borne men allegedly belonging to TMC, surrounded a CPM cadre’s house in the town around 9:30 PM, calling out the cadre’s name, hurling abuses at him and threatening him of dire consequences if his family stepped out to vote on the polling day.

“We had just finished our dinner and were about to fall asleep. But suddenly there was a loud thud, the glass widow of the dining hall was shattered. My teenage daughters and I hid ourselves under the dinning table. They threatened to burn our daughters alive if we dared to defy their diktat and exercise our franchise. I was really scared for my daughters ; they were trembling with fear.

“I somehow mustered the courage to call the cops. But moments after I finished the call, men standing outside our house again started yelling.”

“So you had the guts to call the cops? Nobody can save you today from our wrath.”

“A few more phone calls to seniors cops and SOS to friends in the media did the trick. They suddenly turned on their bikes’ ignition and sped away,”

“what sin have we committed to be treated this way?”

Despite several attempts, TMC spokespersons could not contacted to comment on the issue.