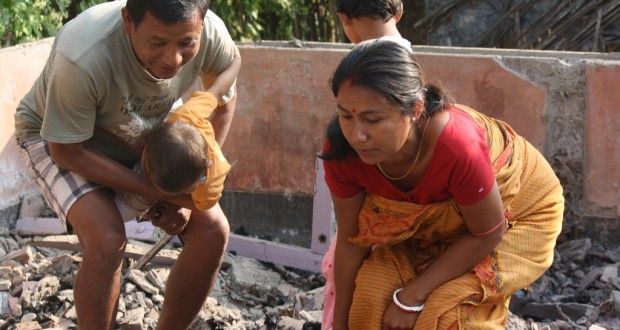 A Bodo teacher Atul Brahma whose house was burnt in Ghunghunikhata village of Dubri District searching for scrap. Brahma's grain stores were looted and cattle stolen

Why Assam continues to be a tinderbox?

Hakaipara is a sprawling settlement perched on a land mass across Gourang River in Kokrajhar, the headquarters of Bodoland Territorial Council (BTC), which runs a parallel government in four districts of Assam.

More importantly, it is one of the around half a dozen villages inhabited by Bangla-speaking Muslims which were flattened during the 2012 clashes between Bodo tribals and Muslims.

The villages can be a case study for why lower Assam continues to be rocked by violence. They tell the all and sundry what causes frequent disturbance in the Bodoland comprising Kokrajhar, Udalgiri, Bakas and Chirang districts. 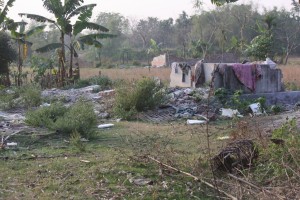 In July and November 2012, over 100 people were killed and tens of thousands displaced in the longest spell of communal clashes in Bodoland.

The severity and brutality of the violence can be gauged from the fact that many of the villages were razed to the ground with marauding gangs of Bodos and Bangla-speaking Muslims not even sparing religious structures, trees, cattle and even crops.

The armed Bodo gangs even walked away with chopped tree trunks and harvested wheat crop.

The violence reared its head again last week when Bodo terrorists went on a rampage in Bakas and Kokrajhar killing over 40 people, majority of them being Bangla-speaking Muslims because the Muslims did not vote in general elections for Bodo People’s Front (BPF), the party at the helm of affairs in the four districts.

Again the barbarism was unmatched with even a five-year-old baby not being spared.

In 2012, one of the most distinct causes of violence was ownership of land. The Bodos openly claimed that the Muslims had migrated from Bangladesh and occupied tracts of forest land which, according to them, should have been with the indigenous population.

They argued that the Bodos, included in the VIth schedule of Indian Constitution, had a right over the forest land. The BPF, which governs the four Bodoland Territorial Area Districts (BTAD) Districts, vehemently opposed rehabilitation of Muslim families found without land documents and only relented after Tarun Gogoi’s government threatened to act tough. 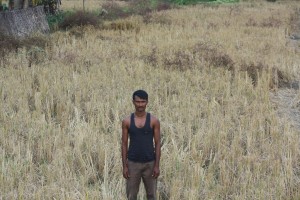 A man standing in his vandalised farmland

It is to be noted that Assam Government has passed on all the departments to the locally elected government of the BTC except law and order and relief and rehabilitation. No wonder, the Police in Chirang, Kokrajhar and Dhubri registered around 1,700 cases for the violence and arrested over six dozen people.

Pratibha Brahma, who publishes an English magazine Bibhungthi—the Opinion in Kokrajhar, is certain that land issue is what causes most conflicts between the Bodos and the Bangla-speaking Muslims.

“This is a factor all over Assam. Congress Government has been encouraging encroachment for vote bank politics. Encroachment has happened even in Kaziranga National Park area,”

Brahma says. She, however, is not sure whether the recent violence was triggered by land dispute. 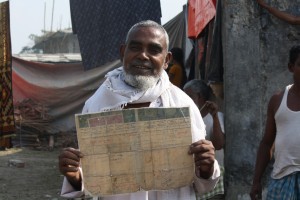 It is not just Bangla-speaking Muslims who are at the receiving end of the land dispute, even Bodos have suffered due to this.

Recently, 66 Bodo tribal families were driven out of Takimari and Barsi villages in Bilasipara sub division of Dubri, a district where Bangla-speaking Muslims constituted a majority, in 2012.

The BTC has allotted a bigha of land to each of these displaced families and resettled them at Choto Malgaon forest village in Kokrajhar.

Last week again the feeling of obligation was what provoked the outlaws of underground National Democratic Front of Bodoland (NDFB) (Songbijit faction) to go on a rampage.

Fingers are also being pointed at ex-BLT cadres who are now members of the BPF.

“How could they vote against us when they are occupying our land and work in our houses and farms?”

may have provoked BPF MLA Pramila Rani Brahma to tell a vernacular news channel that Muslims voted for a non-Bodo candidate.

Calm seems to have returned after Gogoi threatened to snap ties with the BPF which is an ally of the Congress in Guwahati.  But it is anybody’s guess how long the peace will prevail.

Previous: A gentleman in the wild
Next: When Modi faced the nation – A Round Up