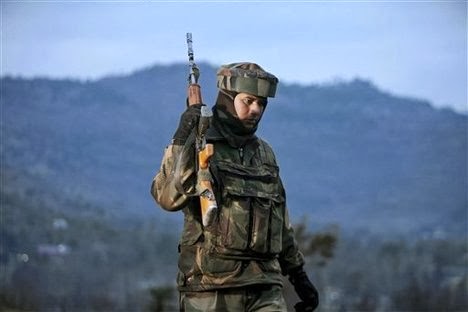 Casualties of an alternate war : of suicides and fratricides in the Indian Armed Forces

“In yet another fratricidal incident, a trooper shot dead his five colleagues before shooting himself with his service weapon in an Army camp in Safapora area of central Kashmir’s Ganderbal district on the intervening night of February 26 and 27”. (Srinagar, Zulfikar Majid, Feb 27, 2014, DHNS).

These valuable lives were not lost to enemy bullets but to suicides and fratricides (killed by a fellow soldier).

The armed forces in India have been grappling with incidences of soldier suicides and fratricides year after year. Despite the Army and Paramilitary Forces taking several measures to control the growing number of suicides and fratricides among troops, incidents such as these have been occurring among security forces since the last two decades, especially in those deployed in conflict ridden zones.

The numbers revealed by the Ministry of Defence indicate a shocking 125 soldiers on an average every year are either killing themselves, or are being killed by one of their fellow mates. While this issue plagues each of the 3 armed forces, the Indian Army has been hit the most with a whopping 82 per cent share of these unfortunate deaths coming from the Army.

Not to say that the Air Force & Navy can breathe easy. The Navy and Air Force put together are losing 23 soldiers every year on an average.

The numbers over the past decade or so indicate that either nothing is being done, or whatever being done is proving to be vastly ineffective.

While most incidents are attributed to factors such as stressful work conditions, inadequacy of leave to go home and communication gap with superiors, it is necessary to first gain an insight on the painful questions posed by a series of such incidents

The army or other security agencies virtually act like a unique family characterised by a strong bondage despite the rank hierarchy. Hence, it becomes necessary to probe as to what actually disturbs this strong fabric and what leads to adverse inter-personal relations among troopers.

Why do relationships worsen to such a limit that even the slightest provocation or the smallest altercation results into strong reactions?

Can it be argued that sometimes duty issues or mutual reactions turn extra-emotional rather than rational and the possession of weapons at all times facilitates the fratricide?

The question is whether it is a lack of proficient command and control measures on the part of the officers or is it the declining sense of order among armed personnel or is it the level of anxiety or frustration coupled with intolerance and the result of a growing sense of alienation among the men in uniform.

Do the personnel develop suicidal tendencies or an intolerant nature out of their hectic duty schedules, susceptible work places, insufficient Support Coordination Measures or excessive regulation?

Fratricide has been mostly argued as the consequence of an individual’s intolerant or impatient nature but the question is what actually leads to such a state of intolerance or confusion?

It has been argued that humiliation, be that insult or use of abusive or impolite language or public punishment thereby hurting somebody’s feelings, beliefs also lead to fratricide. Troops many a times get provoked because of their over sensitivity after a verbal shower or a slight punishment from the officer. Also, injustice – perceived or actual – may also result in the act. Long periods of separation from family leads to a growing sense of guilt at their inability to fulfill moral obligations and this is further compounded by the denial of leave in case of family emergencies. At this juncture and with this state of mind, even a mere argument turns into a fight amongst each other and may lead to a soldier’s suicide or killing of others around.

It has to be remembered that lack of welfare counselling and motivation, stress-intensity and psychological demoralization prompts suicidal or fratricidal tendencies. Furthermore, the social factor of a troubled domestic environment, problematic home affairs, longing to see children and family and job dissatisfaction induce varying levels of stress in the army personnel.

It may not be wrong to state that stress and strain accompanied with excessive regulation is directly proportional to suicides/fratricide.

Though it may be absurd to argue that it is entirely unfriendly and not conducive because forces especially the army bears a spectacular unitarian ethos, characterized by active command, discipline, mutual respect and sense of belonging to one community despite coming from  diverse backgrounds, at times, passing of humiliating remarks by seniors, untimely promotions trigger emotions of revenge mostly in aggressive soldiers, generally resulting into killing of officers by their juniors – termed as fragging (murder of senior officers). Such incidents also lead to suicides of such men after their act.

Fratricide is a social pathology and is a real challenge to the whole defense institution in general and armed forces in particular. It is an indication of unfriendliness among troops.

It can further create a sense of chaos and indiscipline among soldiers and it simply turns a soldier into more of a sensitive being rather than a balanced and responsible trooper. It is the trend of fratricide, which resulted into the death of India’s former Prime Minister Indira Gandhi, the murder of Salman Taseer in Pakistan by his own bodyguard and the blowing up of Ahmad Wali Karzai in Afghanistan.

If this trend is not checked in time, it may discourage both soldiers and officers to do their duties properly. It may also demoralize the youth from joining the armed forces.

Fratricide is not impossible to check. There is a need of efficient training of officers, more specifically for proper control over their battalions.

Every battalion or corps should have a psychiatrist, a psycho-social counsellor and a grievance cell to resolve professional and emotional crisis of the Jawans especially of those combating in conflict ridden or insurgency hit zones. Proper turnarounds need to be implemented for the

There is a dire need to address the issues and problems of forces both at the individual and at a group level. There is a need of timely risk assessments of various armed forces to see their operational environment vis-à-vis their work life balance and the facilities and amenities available.

Sufficient provision of recreational facilities, duty conditions including time shifts, salaries and allowances, food quality, leave facility, ample promotions, postings and tenures in operational and high-risk/ high altitude areas is also called for. The personnel with gradual suppression and suffering from psychiatric illnesses must be handled properly and all the risk factors should be well evaluated to tackle any undesirable happening.

Besides, financial assistance in times of crisis at domestic front or provision of loans to meet homely demands is also needed. Appropriate family accommodations, childcare and educational facilities and security to their families are necessary. Besides, provision of a grievance cell at every forces headquarters is important.

In an age of competition, India cannot afford a disturbed soldier.

It is vital that military is not deployed thoughtlessly to tackle political instability or as mere machines to control irate mobs. These need to be taken care of at governmental or political level.

One cannot ignore the fact that while sometimes, chaotic atmosphere and political instability within a state requires a high level of military effort, however, prolonged deployments of troops in counter-insurgency operations in states such as J&K and the north-east become the main reasons of stress and strain among the soldiers.

The time has come to reach out to the men working at the lowest level in armed forces and a redressel of their issues must be considered an utmost priority.

The defence mechanism of the country requires changes in a manner that every soldier feels empowered, emancipated and economically sound even after retirement.

Previous: What your wife, sister, daughter is not telling you..
Next: Bans changing discourse: Rape is no more the centre of debate