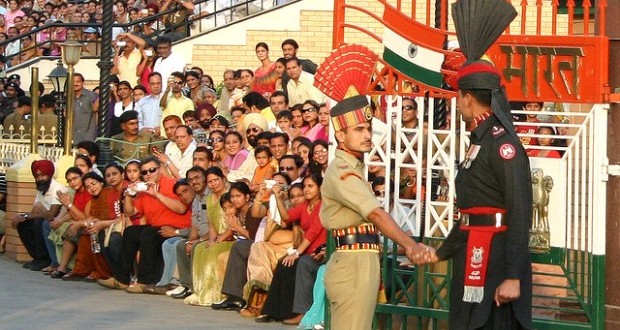 By Wali Aslam |  The Conversation

The Indian election has been afforded much publicity in the Western media. A record 814 million eligible voters have been expressing their choices in a poll taking place in nine phases. Voting began on April 7 and is due to end on May 12 with results expected on May 16. It is highly likely that the current ruling coalition United Progressive Alliance (UPA), led by the Congress party, will be removed from power and will be replaced by a Bhartiya Janata Party (BJP)-led centre-right coalition with Narendra Modi as the Prime Minister.

Modi’s rise is remarkable because he has never before served in the Lok Sabha, the lower house of the Indian Parliament, and does not have experience of national-level politics. Modi is a long-time member of the Rashtriya Savak Sangh (RSS), a Hindu nationalist movement which generally endorses the BJP. Many questions are being asked about what type of foreign policy India will adopt towards Pakistan if Modi were to be elected as India’s 14th Prime Minister. This very pertinent question is being answered in two very distinct ways.

Those who focus on Narendra Modi’s Hindu nationalist ideology argue that future Indian foreign policy towards its erratic neighbour will be more “muscular”. They point to the reactive posture of the UPA during the last ten years; it was unwilling to take risks and show initiatives in foreign-policy domains. The adherents to such views argue that a future India will be more assertive in the region and Modi’s nationalist ideology will drive such a policy. They note the lack of remorse expressed by Narendra Modi regarding communal riots in the Indian state of Gujarat in 2002, in which over 1,000 Muslims were killed.

Modi was the chief minister of the state at that time of the riots and he has been repeatedly blamed for allowing or abetting the pogroms. There is little indication that Modi’s position has changed, given his refusal to condemn anti-Muslim riots in Uttar Pradesh last year. These analyses conclude that such an unapologetic stance will likely be reflected in India’s future foreign policy towards its neighbours.

On the other side are those who argue that regardless of who occupies the office of the Prime Minister, “the broad contours of Indian foreign policy are not likely to change dramatically”. Looking at the history of the Indian foreign policy, these evaluations highlight the focus on continuity, rather than change, championed by India’s foreign-policy bureaucratic establishment. Given that Modi has almost no national-level experience, they hold that he is likely to be deferential to the diplomats in India’s ministry of external affairs.

The missing link, however, in the discussions concerning India’s relations with its neighbour is the regional, geo-political situation that will likely emerge after the US withdrawal from Afghanistan in the summer of this year. The direction of the future Indian relations with Pakistan will be decided not by the internal factors in India but by the way the region takes shape in 2015.

The United States has played a stabilising role in India-Pakistan relations since its invasion of Afghanistan in 2001. It has successfully made the case to the Pakistan army that the real threat Pakistan faces is from the northwest of the country (Islamist militancy), and not the east (India). Through diplomatic pressures and huge financial assistance, the US has managed to ensure that Pakistani meddling in Indian affairs stays to the minimum and if there is any, it does not lead to a full-fledged war – with the Mumbai attacks in 2008 a case in point.

With the US set to withdraw from the region, this dynamic will likely change. The Pakistan army could escalate its cross-border infiltration into India through Islamist militants from groups such as Lashkar-e-Taiba, who carried out the spectacular attacks in Mumbai. The army in Pakistan has recently found itself cornered by the government of Nawaz Sharif, which has attempted to assert unprecedented control over the most powerful institution in the country. The army is also being squeezed by the country’s increasingly assertive private electronic media. At crunch points in the past, the army has chosen to instigate conflict with India to shore up its domestic support base, with two examples being the India-Pakistan war of 1965 and the Kargil (Kashmir) conflict in 1999.

The American withdrawal from Afghanistan will also open the door for both Pakistan and India to compete for strategic influence in the country. Where Pakistan considers its right to control the domestic affairs of Afghanistan, India is unlikely to let Pakistan do so. India largely ignored Pakistan’s involvement in Afghanistan in the mid-1990s and consequently Pakistan used Afghanistan as a training ground where militants were trained to ultimately attack various targets in India, particularly in Kashmir.

In order to prevent such an outcome again, India has formed a close relationship with the government of President Hamid Karzai in Afghanistan. The identity of Afghanistan’s next president is not yet known, but if the front-runner, Abdullah Abdullah, manages to consolidate his lead, he will undoubtedly continue down the path of India-Afghan friendship.

Abdullah was closely linked to the Northern Alliance that pushed the Taliban from power in 2001 and was supported by India, among others. But complicating matters, Abdullah is unlikely to get wide sympathy from the majority Pashtun population of Afghanistan. Pakistan is likely to continue to support the Afghan Taliban who thrive on the Pashtun sympathy in the country, thus putting India and Pakistan on a potential collision course.

The course of future Indian relations with Pakistan will depend on the regional geopolitical environment. Two determining factors in that regard will be the US withdrawal from Afghanistan and that country’s ongoing presidential election. Although Narendra Modi’s ideology may depart sharply from that of the current PM, Manmohan Singh, Indian foreign policy will still, should he be elected, be determined by developments beyond the country’s border, and beyond its control.