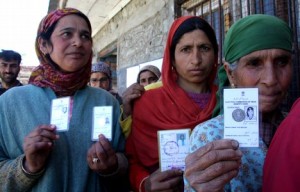 The elections in the state of Jammu and Kashmir have already started and a high turnout (69.18%. in Jammu and 70%, in Udhampur) like the historic Panchayati elections held in 2012 (turn out 90%) in the state has become the trend now.

The elections in Kashmir valley will be held on April 24, 30, and May 7 for the three significant but sensitive constituencies of Anantnag, Srinagar and Baramulla respectively where heavy weights such as the union Minister Dr Farooq Abdullah, PDP president Ms. Mehbooba Mufti and Muzafar Baig of PDP, sitting MP’s Mehboob Beg and Sharif ud-Din Shariq of NC besides many others will try their luck.

While the Jammu and Udhampur constituencies have already casted their ballot, the significant Ladakh constituency will also go to polling on May 7.

Observation and interactions reveal that the very election fever significantly differs from Jammu to Kashmir to Ladakh divisions based on regional ideologies and politics and people’s like and dislike for particular parties.

There is also a significant difference in parliamentary and assembly elections fever among masses especially in the valley that actually divides Kashmir Psephology into two main collective perceptions; i.e, a boycott loving brigade and keen voters.

However, amid the election fever, the violence factor happens to remain intact despite a sufficient security apparatus in place. An encounter at Ahmad Nagar, Srinagar, April 13 occurred killing some security personnel and a few militants thus painting the picture of yet another election season with blood and reflecting the sensitivity of elections in Kashmir.

Attacks on the mainstream politicians or workers have begun. Very recently, NC’s Yawar Masoodi escaped an assassination bid in Pulwama at his residence while his bodyguards got killed in the attack. The most recent incident is the killing of a PDP Sarpanch Amin Pandith, in a village in Pulwama.

Every time Kashmir goes to elections, violent activities tend to rise reminding us of the continuing dissent of a significant chunk against the electoral process that has so far not been seriously dealt with. However, amid this uncertainty and aspirations for change, varied perceptions come to fore.

Inevitably, the youth end up questioning the very utility of voting in Kashmir.

A research scholar on asking whether he will vote in the upcoming elections says,

“How many Kashmir centric questions have our sitting MP’s raised in the parliament so far and how many issues have actually been tackled? They (leaders) are hardly concerned about Kashmir and Kashmir issue once they get elected; therefore voting for us is a futile exercise. Further there are no suitable alternative candidates as well. Who to vote is a huge dilemma”.

Another young man is of the opinion that even if we chose some MP’s, they and their queries are hardly taken seriously in the parliament.

Amid these thoughts, there are however obvious trends, people’s interests, guesses and comments.

“to most of the masses here, these are Indian elections and have nothing to do with them, so they don’t consider them significant.”

People also argue that these elections do not directly address their issues as MP’s have so far not made any significant difference in their areas except donating a few ambulances for a few health centres.

As expected, speculations and people’s self conceptualised opinion polls, to be read as wild guesses are all over the place.

A friend from Jammu guesses,

“In Jammu division again it will be BJP the winner, not because of any Modi Wave but of the local BJP’s footing and in Udhampur it is Azad (Gulam Nabi Azad) undoubtedly”.

Meanwhile, the mainstream politicians especially the heavyweights are being garlanded and welcomed by masses in their respective support areas and the institution of blame game as usual is at its peak besides verbal attacks against each other.

Leaders talk of using violence and do not think twice before accusing each other of killing people. Manifestoes are not new too. Same old stories, same old dreams continue to haunt the valley.

The National Conference (NC) again is relying on its autonomy card and the critics ridicule it on the same agenda for its perpetual failure to achieve the same. They criticise the ruling party for not realising the revocation of controversial AFSPA.

Peoples Democratic Party (PDP)- the main opposition party talks of K-issue resolution, development, healing touch and safety and dignity of Kashmiris. PDP possesses a sound backing especially in South Kashmir and that is why this time Mehbooba of PDP  vs Mehboob Beg of NC is going to be an interesting and hard competition.

There are other candidates as well and while some of them talk of Kashmir issue “solutions”, some talk of development, while some others just criticise others, etc, however the hue and cry is not as much as that witnessed during the assembly elections.

On the other hand, the much loved separatist and revered octogenarian separatist leader SAS Geelani is back to valley with his routine boycott formula and this time with another rocking controversy that Modi had sent his emissaries to him and to a few other contractors of the K-issue. While the new lead is clearly denied by BJP, the issue is being seriously followed by other separatist brigades like by Mirwaiz who rubbishes Geelani’s claims.

Previous: Modi-fying Media : Just for elections or beyond?
Next: The Non-state voters